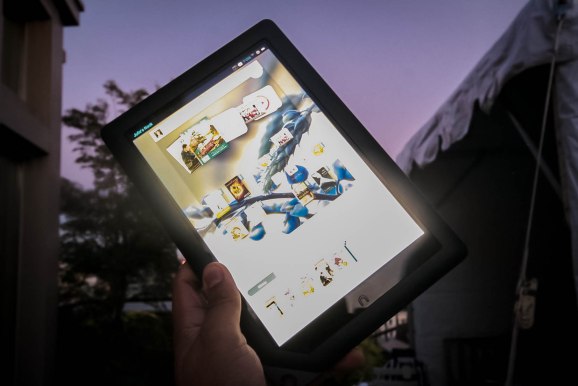 Barnes & Noble has thrown in the towel and abandoned its Amazon-style Android strategy, finally agreeing to add Google’s app store, Google Play, to the Nook tablet.

“We are offering our customers even more great entertainment on our award-winning tablets,” Barnes & Noble CEO William Lynch said in a statement. “Now with access to more than 700,000 apps and the best reading experience available, NOOK HD and NOOK HD+ are must-see products for entertainment lovers.”

Barnes & Noble only ever managed to get something like 10,000 apps on Nook, resulting in an unsustainable poverty of apps compared to platforms such as iOS, Google Play, or even Amazon’s proprietary app store, which currently sports about 75,000 apps, and has a thriving app ecosystem. Popular games like Temple Run — one of the top 50 apps of all time on iOS — never touched the Nook platform.

B&N chief executive Lynch is essentially admitted as much, highlighting the fact that now Nook will have Google Play’s full complement of more than 700,000 apps. But the addition does not come without some cost.

First, to install Google Play, device makers also have to agree to install several Google-created apps, such as YouTube, Chrome, Google Search, Google Maps, and Gmail. Those apps will now be automatically installed on existing and new Nooks via an automatic over-the-air download, which means that Nook users will find some new apps on their devices without their request or action.

More critically, B&N has been selling Nooks — much as Amazon — on the razor and blades philosophy: Sell the razor cheap, and make it up on digital blades, or content such as books, music, apps, and movies. With this new Google-centric tactic, that strategy is now at risk.

Just how much remains to be seen, but the fact is that the old strategy was not working anyways, simply due to the fact that B&N did not have the scale to attract enough developer interest, and therefore enough apps.

In addition, as Time notes, Microsoft is a part owner of the Nook business, having invested $300 million into B&N in 2012. Technology and business do make for some odd bedfellows.