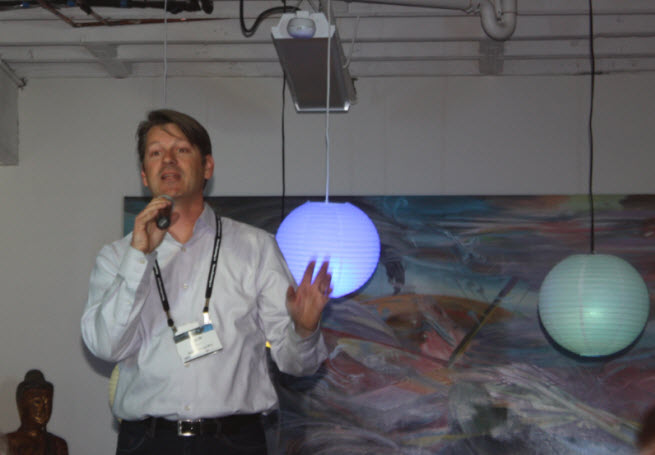 The NeuroGaming Conference and Expo drew more than 300 people to the YetiZen Innovation Lab this week in San Francisco. That’s a good turnout for a first-time conference, and it generated enough buzz to inflate a new investment bubble in games. There was plenty to get excited about with games that can really latch onto our nervous systems and brains. More than 50 companies showed up to share their efforts in the space. But it’s also clear that the nascent market is also in need of a reality check. 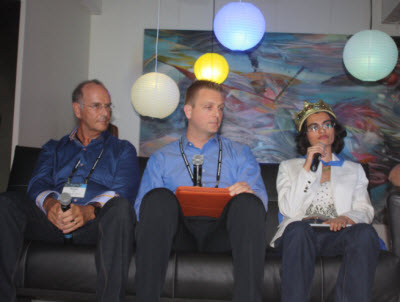 Zack Lynch (pictured above), the organizer of this week’s event and founder of the Neurotechnology Industry Organization, deserves enormous credit for envisioning and defining a new part of the game market. He explains Neurogaming as the “technologies that integrate all of our nervous system, not just our brains, into gaming.” It includes technologies that track things like player heart rate, brain wave data, facial analysis, pupil dilation, hand and body gestures, and changing emotional and cognitive state — all toward driving actual gameplay.

Lynch is effectively looking ahead to the point where new technologies put the spinal cord in touch with the brain and result in a fusion of big data games that are fun. Looked at that way, you could see Neurogaming as a combination of a market with lot of early R&D (it’s still pretty hard to use only your brain waves to control a game), as well as a market where a lot of heavy lifting has been done in putting the sensors in place, such as the Wii remote or Microsoft Kinect. Neurogames will take the data from sensors and turn it into fun. In five years, Lynch believes it will be a huge market.

But if someone is going to invest what it takes to make that happen, there has to be a pay off. At the event, I moderated a panel of investors who evaluated the risks and opportunities in the market. We took a survey of the space. On the lightweight level, Neurogaming started with “brain training” games such as Nintendo’s Brain Age from 2005,  and it has evolved into hardcore brain training games from companies like Lumos Labs. And it has expanded to include sensor-based gaming such as Nintendo’s Wii Fit, Microsoft’s Kinect Sports, and Intel’s Perceptual Computing initiative.

Our panelists saw Neurogaming hardware startups as risky ventures, and none have made a real investment in a Neurogaming company yet. I characterized the market as being made up of great science fiction, fascinating R&D, and limited commercial potential. Chris Petrovic, a former general manager of GameStop Digital Ventures, said it was very hard for the retail chain to embrace startups that wanted to sell an accessory for a PC or console since the likelihood that a gamer would buy an extra accessory for a machine was very low.

It’s pretty hard for startups to come up with the marketing dollars to promote a new product in 4,500 game stores in the U.S., Petrovic said. Any startup will have to find partners with deep pockets, and to do that, it will have to have technology that works flawlessly.

Petrovic also said that companies avoid calling themselves “Neurogaming” companies because they might just wind up scaring consumers, who may not want games messing with their brains.

“Keep consumers in mind,” he said. “Don’t call this the next great Neurogaming device because it won’t sell.” 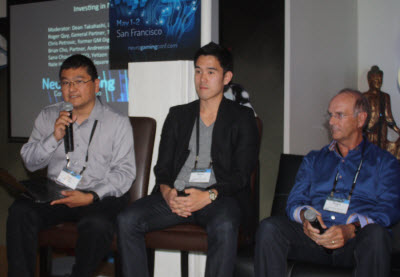 So a Neurogaming startup trying to sell its own hardware (as only a few companies such as NeuroSky have successfully done) is swimming upstream. Only the biggest players, such as Microsoft, have the investment horizon and capital to build technologies such as Kinect and bring a new piece of hardware to the market with a bang.

But, as the market grows up, it is encouraging to see technologies that could be used for Neurogames being built into general-purpose devices such as smartphones. One of the most exciting platforms for Neurogaming could be Google Glass, given its use of so many big data sources that it can pull into your view, said Brian Cho, a partner at Andreessen Horowitz. That technology could prove to be very immersive and entertaining.

“It always increases what’s possible when the devices themselves are more capable,” said Sana Choudary, the chief executive of YetiZen (pictured with the gold crown). “Qualcomm acquired a gesture control company, and it is putting that capability into all of its chip platforms for mobile devices. That’s more exciting for a game developer.”

Choudary said that, based on data from the investment bank Raymond James, about 108 Neurogaming startups have raised money in recent years. Eight companies are providing technologies for game developers to enable Neurogaming. Sixteen startups called themselves platforms, seven were new hardware plays, and eight were integrating hardware devices together. Of all of the companies, only one was a pure game developer. The good news is that the category isn’t oversaturated like social casino games.

Roger Quy, a partner at venture firm Technology Partners, said he slices the market into two parts. One is the part of Neurogaming that could be therapeutic, such as the software that is used to identify and treat people with attention deficit disorder (ADD). The other part is entertainment. Therapeutic Neurogames have to have measurable benefits, but they often aren’t fun. The entertaining Neurogames are fun, but their benefits are often easily debunked. 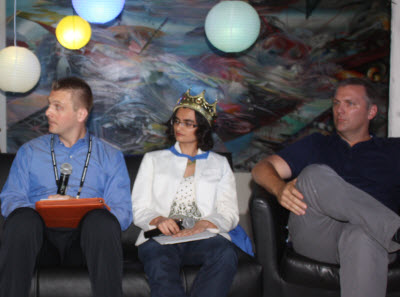 “Therapeutic benefits have to be measured and pass muster with the FDA,” Quy said.

Quy worries that many technologies are being added to platforms on the assumption that they will be used for something useful. But what games would really benefit from information such as a user’s heartbeat? (Some folks have speculated that you could speed up or slow down a game based on how the user physically responds to it). Quy says that adding technology for the sake of it isn’t necessarily going to result in fun and useful Neurogames.

Quy also identified another weakness in the market: the lack of investors who are comfortable making game investments. Gaming falls “between the cracks” of information technology and healthcare investments, and many investors won’t even listen to game pitches because they can’t judge them well. On the other hand, the smaller game companies are capital efficient, and they don’t always need a ton of seed money.

Gaming is like the Tesla Roadster for Neurogaming applications, said Nate Hennings of Union Square Advisors. It is a market full of enthusiasts who want to believe in the high-end technology and will adopt it even if it is expensive and on the bleeding edge. But as the technology and games become more real, the chance to reach the mass market is growing, and it could spread into other markets well beyond gaming.

Cho said a Neurogaming startup would grab his attention if it had a world class team with people who have done a successful startup before and have a great track record working with technology. It helps to have software or hardware that can’t be easily replicated. All of that mitigates risk.

It could still be years before a Neurogaming company makes its mark. Still, with so many game companies on the downswing, it was fun to talk about a market on its way up. And it’s fun to dream.

“I would love to have one of those brain sensors so that I could blow up my enemies in a game just by thinking it,” Choudary said.

Quy said he would love to see a device with brain wave detection technology built into an inexpensive mobile device.