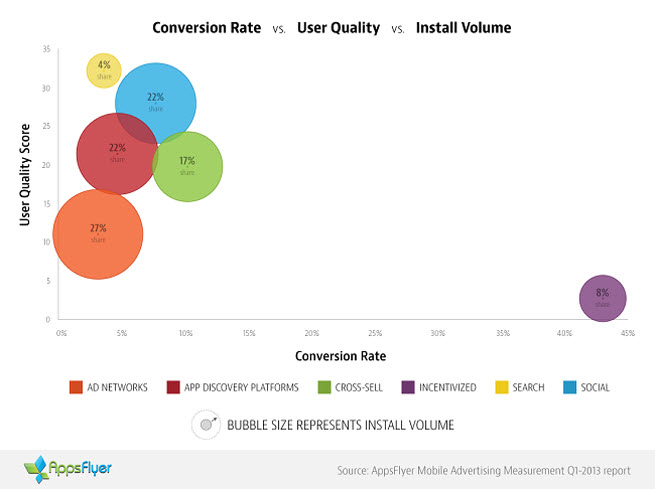 Word-of-mouth marketing over social platforms delivers better results in paid-app marketing than search, according to a study by AppsFlyer, a firm that tracks mobile-app marketing and monitors billions of events, such as the number of mobile app installations in a given quarter.

That means that sharing an app over social networks such as Facebook and Twitter is very effective in getting users to try out a new app, said Oren Kaniel, the chief executive of Israel-based AppsFlyer, in an interview with VentureBeat. As a result, AppsFlyer believes the cost of social campaigns will rise as advertisers leverage social channels.

AppsFlyer’s Mobile Discovery Report for the first quarter of 2013 showed that if you’re looking for high volumes of users, mobile ad networks work best. (See the chart above.) The study also found that incentivized traffic is cost effective if the return on investment (ROI) is measured properly.

“We have access to a lot of data, and we’ve broken the results out among the different mobile marketing channels,” Kaniel said.

These results are relevant to anyone who develops and markets apps in the vast app stores for mobile devices. Getting discovered remains the primary challenge for creators whose apps are just one in a million in the infinite shelf space of the digital stores. If they understand which marketing channels are most effective, they can better understand how to create their marketing campaigns, AppsFlyer says.

The most common channels used to promote and advertise mobile apps were ad networks, app discovery platforms, cross sales, incentivized traffic (where a user is encouraged to download an app in exchange for a benefit in an existing app, such as free credits in a game), search, and social platforms. AppsFlyer compared the conversion rate (or percentage of users who installed an app), user quality (based on the number of sessions, retention, or length of play), and volume (the number of new users).

Search delivered the highest quality of users for mobile apps, but it fails in delivering quantity or high conversion rates. In this way, mobile search isn’t nearly as dominant as search on the web. The apps best suited for search campaigns are e-commerce, utilities, travel, food, and content.

Ad networks, meanwhile, deliver strong volume. More than 100 serve the mobile market, but the quality of users is lower, and conversion rates are lower. The apps best suited for ad networks are mass-market apps and games. Ad networks are expected to improve performance over time as targeting gets better.

Incentivized traffic delivers the best conversion rates, but the average user quality is the lowest. The key to these kinds of campaigns is understanding the ROI, where app marketers measure all campaign expenditures and their direct returns. Games and apps with a high virality are best for incentivized traffic campaigns.

AppsFlyer was founded in 2011 and has 10 employees. AppsFlyer’s NativeTrack platform tracks the performance of mobile-app campaigns. Rivals include AD-X, Apsalar, and HasOffers. AppsFlyer has more than 500 advertiser accounts and works with 150 integrated ad networks, discovery platforms, and other marketers.