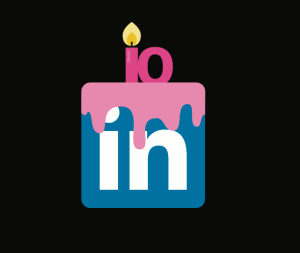 LinkedIn employees around the world celebrated “Cinco de LinkedIn” on May 5, 2013 as the company turned 10, co-founder Reid Hoffman wrote on the company blog.

Ten years ago, Hoffman started LinkedIn in his living room with the “mission of connecting the world’s professionals to make them more productive and successful.”

In late 2002, he recruited a few pals form PayPal and SocialNet, and six months later, they launched LinkedIn with the tagline “Relationships matter.”

“Today, hundreds of millions of professionals around the world are turning to LinkedIn to connect with each other, manage their identities, get insights they need to be great at what they do, and find their dream jobs. I’m continually inspired by our members’ career aspirations and achievements,” wrote Hoffman.

Mountain View-based LinkedIn now employs over 3,700 folks and has already logged in 225 million members, and it’s growing at a furious rate of more than two new members per second.

LinkedIn has grown by leaps and bounds in the 10 years that it has been around. It made for the biggest Internet IPO since Google when it went public on the New York Stock Exchange in May 2011. The shares spiked 109 percent on the first day of trading, making for an incredible debut.

Weiner came on board to provide strategic direction to the company in 2009. LinkedIn celebrated its first international office in London, and the addition of French and Spanish versions of its website a year before.

In 2006, the professional networking site became profitable for the first time. It also launched public profiles and core features like recommendations and people you may know that year.

The company has sure come a long way since it introduced its first ‘Jobs and Subscriptions’ revenue model in the year 2005.