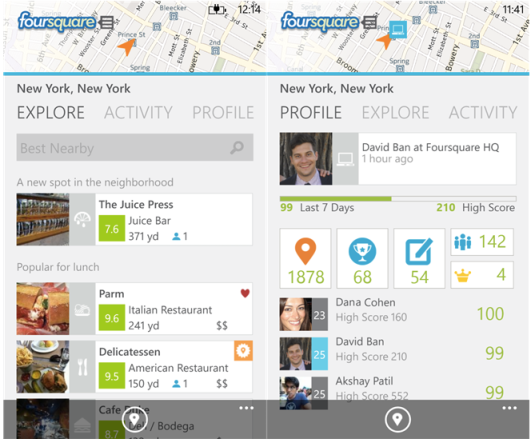 As with a child’s first years, every little Windows Phone development demands its own bit of fanfare.

The latest update comes from Foursquare, which is updating its Windows 8 app. The app, which Foursquare says is optimized for Nokia’s Lumia phones, adds features like lock screen notifications, voice search, and the ability to pin certain people or venues to the home screen.

The biggest improvement, however, is the app’s new Metro-fied interface, which is a significant step up from the design of its predecessor. In fact, the new Foursquare app doesn’t feel like a Foursquare app at all — it feels a Windows Phone 8 app.

That, I assume, is exactly the point. While Windows Phone 8 offers a number of things that iOS and Android don’t, the most distinctive of these features is the operating system’s design language. As a result, it’s always a big deal when developers take the time to create native, optimized versions of their apps rather then poorly port design elements from elsewhere. (It’s also a major vote of confidence: Obviously, Foursquare sees the use in taking the time to do all of this extra work, even if it did get help from Microsoft and Nokia.)

Foursquare is on a design update streak as of late, having last month updated both its iOS app and web interface to focus on core features like Explore and user ratings.