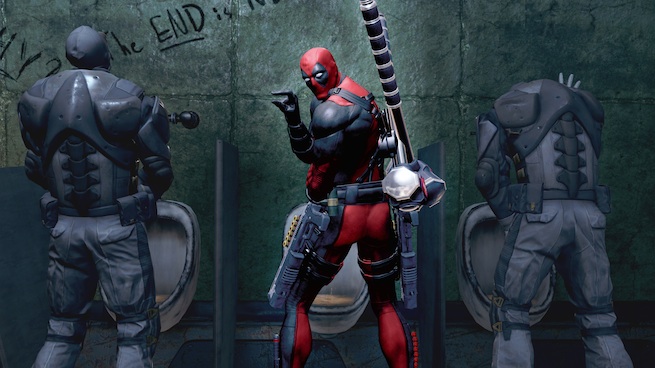 As the masked mercenary known as Deadpool, Wade Wilson mostly looks out for himself. The nobler heroes he sometimes fights alongside with do their best to distance themselves from him as much as possible. And he never shuts up — he’s called the “Merc with the Mouth” for a reason.

He also has two other voices living (and arguing with each other) inside his head. So he’s kind of insane.

That insanity plays a huge part in High Moon Studio’s third-person action game based on Marvel Comic’s vulgar antihero (out June 25 for the Xbox 360, PlayStation 3, and PC). Deadpool’s mind is split into three distinct personalities: regular Deadpool (who you play as), a childish Deadpool dealing with raging hormones, and a veteran soldier who’s a bit more level-headed and strategic. The developer recruited former Deadpool author Daniel Way to write the story and brought along ubiquitous voice actor Nolan North — who sounds like he had a hell of a lot of fun in the role — as Deadpool himself.

After playing and watching small chunks of the (surprisingly fluid) combat-focused gameplay, I noticed that much of the off-the-wall humor works because of Deadpool’s many voices. Here’s a look at how they viewed the most memorable events from the demo. 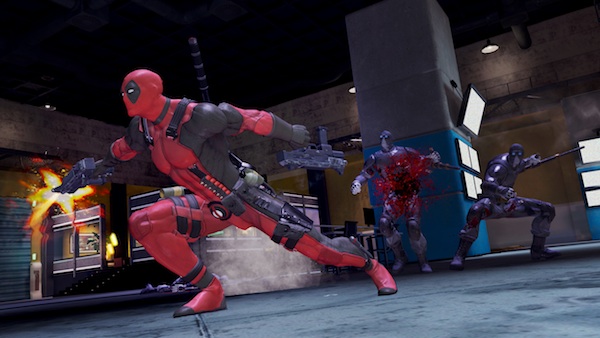 Above: You can extend the combo timer by shooting enemies with the right trigger.

Like in the comics, Deadpool loves to break the fourth wall. He’s well aware that he’s in a video game, so instead of saving the world, he’s trying to make the best game he can. In the first level, Deadpool speaks to the president of High Moon Studios over the phone, who finally agrees to make the game after Deadpool’s bombs go off in the developers’ office. He even calls Nolan North, but he promptly yells, “Well, fuck you, Nolan!” after North proposes an “alternative” take on the character that has him chasing after men rather than women.

His methods to make the game can seem illogical: At one point, I had to rapidly tap a button to inflate a large bounce house at the bottom of a sewer. Since I didn’t know where to go, I kept jumping inside of it — hearing North saying “Boing!” in dozens of ways is kind of entertaining — until Activision producer Chris Owen pointed out that a gate had opened (which you could barely see behind the house). It all made sense 20 minutes later, when, at the end of the level, Deadpool came crashing down from the top of a skyscraper and used the bounce house to cushion his fall.

“[Since Deadpool can’t die due to his regenerative healing powers], there are no consequences to [his] actions,” said senior creative director Dave Cravens. “He can do all sorts of things that other characters can’t. So that’s part of what drives him. That and the fact that he’s just absolutely insane. I think when he walks into a room, he’s convinced everybody loves him, unless they’re shooting at him. [But] if they got to know him, they would love him. So Deadpool is all about Deadpool.”

When the first achievement pops on the screen:
“What’s that? You guys tracking my every move now? But I haven’t even accomplished anything in this game yet!”

Deadpool tries to edit a script sent by High Moon. But he tosses it away and turns to you:
“Hey, player, just go with it. We’re about to change your fucking life. Bring the noise!”

When all three voices try to figure out how much explosives he should use:
“Dude, fuck math. Just use all of it!” 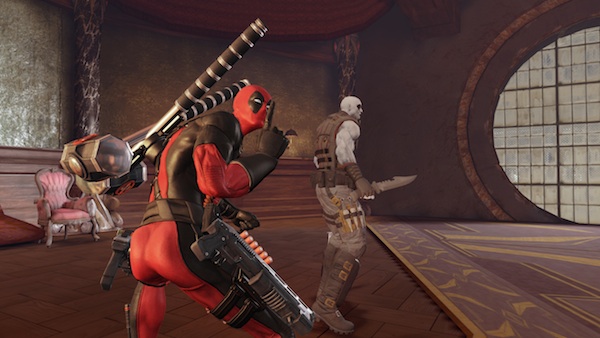 Above: Deadpool can slowly take out bad guys with stealth executions.

The naïve and childish version of Deadpool sounds like he hasn’t quite hit puberty yet, but that doesn’t stop him from giving in to his more impulsive desires … including, but not limited to, his libido. When he comes across Cable (one of many Marvel characters making a cameo) in the island of Genosha, Deadpool imagines him as a woman wearing a small bikini. The image evaporates as he runs toward him, but he still thinks she’s there. If you choose to, you can make Deadpool squeeze Cable’s nonexistent breasts, which he swiftly counters by punching him in the face.

While the three voices argue whether Cable’s telling the truth about the “incredibly large breasted” naked woman who wants to meet Deadpool:
“B-B-B-But what if Cable means it this time?”

After you inflate Deadpool’s sex doll in his apartment:
“She always looks so surprised to see us!”

While Deadpool sings a pretty decent rendition of Patsy Cline’s “Crazy”:
“See? He’s like an angel!” 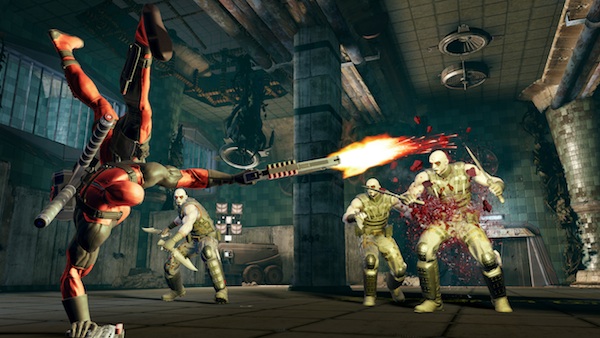 Above: One of Deadpool’s “gun-ka” abilities that attacks multiple targets.

This personality speaks in several octaves lower than the other two, and his no-nonsense comments make it clear that at least some part of Deadpool still cares about preserving whatever integrity he has left. But he’s ultimately powerless, since the others don’t listen to him.

He’s also a stark reminder that Deadpool is an efficient killing machine. Due to his regenerative healing, Deadpool can’t die; he just gets knocked out if his health bar reaches zero and scolds the player when it happens. Starting off with his signature katanas — and later with a pair of daggers and large hammers — you’ll use a combination of quick and heavy attacks to brutally dispatch your foes. Guns can extend your combo time: Deadpool automatically locks on to targets and fires at them when you pull the right trigger. A teleportation ability (that you can direct with the analog stick) is useful for dodging incoming attacks.

You earn Deadpool Points with each kill, which are redeemable for new weapons or upgrades. Longer combos will also increase your Momentum meter and give you access to special “gun-ka” techniques. These show off Deadpool’s acrobatic skills as he leaps into the air and eliminates groups of enemies in one fell swoop.

After Deadpool realizes that Cable lied about the fan girl:
“Don’t worry, we’ll land a real girl someday. This is our game, after all.”

When you first discover the sex doll:
“If this game had a shame meter, it’d be full right now.”