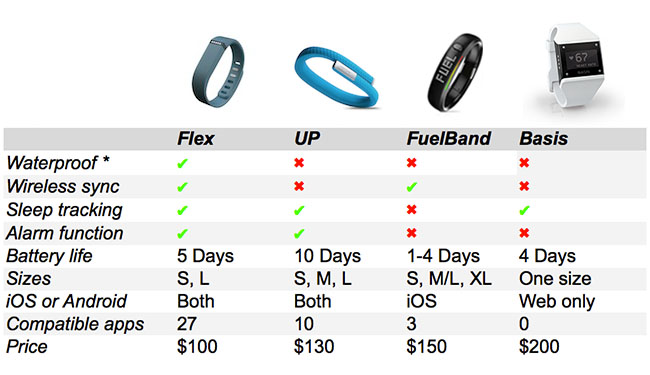 There are four major players in the fitness wristband business now: FitBit, Jawbone, Nike, and Basis. They’re jockeying prices and features to get your dollars, but sometimes it’s hard to know where to start. That’s why we’ve created the chart above to help you take the leap.

You should consider three major categories when choosing one of these geek-chic exercise buddies: price, device, and battery life.

Right now, the FitBit Flex is the cheapest, coming in at around $100, followed by the Up at $130, the FuelBand at $150, and Basis at $200. There are, of course, tradeoffs. The Flex can’t tell when you’re on an incline, and while Basis is twice as much, it can monitor other elements such as your sweat and heart rate.

Indeed, the Basis might seem expensive and pared-down on the chart, but it focuses more on what’s going on inside your body than the others. An optical sensor can detect your blood flow, which means Basis can watch your heart rate throughout the day. It also measures your skin temperature and sweat levels, bringing all of this information together to gauge the intensity of your activities. It also plans on releasing mobile apps soon, with Android coming first.

On the device front, if you’re an Android user, however, you’re probably not going to want the FuelBand. It’s only iOS compatible, and it seems Nike has no plans to come out with an Android version. Flex, Up, and Basis provide Android support, but only for some devices.

When it comes to which band can outlast the rest, Up comes in as the winner with its advertised battery life at 10 days. Flex follows behind with five days of battery life and FuelBand with only one to four days. Of course, these times will all depend on your usage, which may include sleeping, as both Up and Flex monitor your sleep patterns and will wake you up with an alarm. Basis will track your sleep, but you’ll have to rely on another device to get your butt out of bed.

You can also hook up your wristbands to a number of apps. While Up and Flex support many fitness apps such as MyFitnessPal and LoseIt!, FuelBand focuses on the social side with connections to Facebook, Twitter, and Path.

Of course, your decision will depend on what matters most to you. Is it the science? The cool charts and analysis on your daily activities? The price or battery life? Let us know which you choose and why you love it (or hate it).