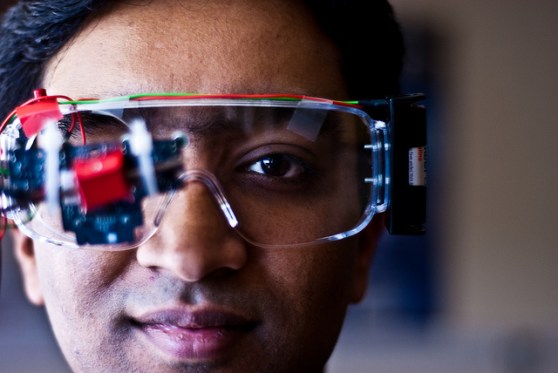 Advertisers are infamous for their relentless attempt to learn even the most mundane details about your life in the hopes of selling you something.  But there is one thing that’s always eluded them: your physical reaction to their efforts.  Whether a billboard, banner, or mobile ad, advertisers have had to rely on other indicators to know whether they’ve successfully grabbed your attention.

Unfortunately, this may be coming to an end.  Advances in eye tracking technologies will soon make it possible for the ads you look at to watch you right back. As the next generation of computing turns to the eyes, a whole new world of interaction and control is becoming possible – along with entirely new methods of invasive data collection and tracking.

The same technologies that will make playing Fruit Ninja with your eyes a reality will also allow advertisers to monitor and measure everything you look at. As UCLA Professor John Villasenor explained in his piece on the issue for Slate, “Today, when we read something online, our thoughts are still our own. We should enjoy it while it lasts.”

Once a set of technologies used for assisting the disabled, eye tracking is quickly moving from the lab to mainstream applications. In its most high profile, albeit gimmicky, release yet, the new Samsung Galaxy S4 comes with “Smart Scroll” and “Smart Pause” features that let you (somewhat) move the screen up and down and pause videos with the movement of your eyes.  Reviews of the phone haven’t been great – but there seems to be a lot of interest in the feature itself.

Although advanced eye tracking is still years away from mainstream deployment, in the last year alone there have been some incredible advancements in usability and accuracy. 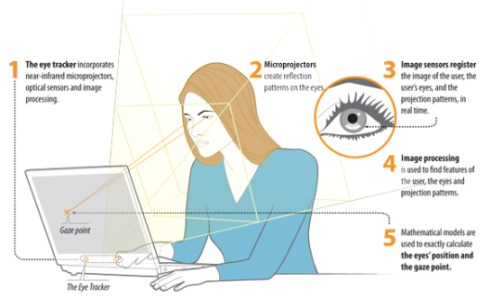 Later this year, Tobii is will release a limited edition of “REX,” a small USB-connected bar that will let you control your desktop with your eyes. PredictGaze has developed a technology that can be used on ordinary cameras, work in different types of lighting, and supposedly function at distances of up to 12 feet. It is capable of performing facial recognition on shoppers to gauge how they react to different products and to determine which demographic groups they belong to.

In perhaps the most startling development, researchers have developed a product called Sideways that can also work on ordinary cameras – except it doesn’t need to calibrate to each user and can even measure multiple people at once. In one instance, “14 people of various heights, ages, and eye colors, who interacted with it simply by looking at a series of CD covers on a screen” were tracked at the same time.

The technology still has a long way to go, and by itself, eye tracking data wouldn’t be nearly useful enough for informing a serious business decision. But in practice, this information would be paired with other data sets. Retailers, for example, have recently started to embrace methods more traditionally synonymous with surveillance. Traditional loyalty card programs have now entered the age of big data, and some malls are even using your cell phone location data to attempt to determine what products you are looking at. In the cutthroat world of retail, success or failure can depend on knowing more about what your customer wants than your competition.

Jay Stanley, ACLU Senior Policy Analyst, points out that there has already been extensive research into what we can learn about people from tracking where they look, and the results are worrisome. To varying degrees of accuracy, eye tracking can possibly reveal certain cognitive disorders, the use of drugs and alcohol, mental and psychological illness, deceitfulness, and even sexual orientation. This is not to suggest that any of these inferences are currently actionable. But if any of these measurements even come close to revealing your behaviors or traits, you can be sure somebody will collect and sell this information.

The hype surrounding the release of Google Glass has sparked intense debates over what limits should be placed on recording devices in public. Many of its fanboys have been cheering for the eradication of whatever minimal semblance of privacy in public we have left. They evoke the dangerous and intellectually-lazy falsehood that those with nothing to hide have nothing to worry about. What was once a common-sense observation about there being no expectation of privacy in public has now been perverted into an excuse for law enforcement and advertisers to gather as much data as possible.

Naturally, when you walk down a street, your face is visible to those around you – this is the justification given for the use of facial recognition and behavior detection systems in public.  Does this same reasoning apply to eye movements? If your attention can be quantified, should you have any rights or control over how that information is used?

As technologies enable us to measure things that once were inconceivable, there will constantly be new classes of data, and we’ll have to evaluate them and determine their worth to us.  Hopefully, by then, we will have learned our lessons from the Do Not Track fiasco and the “cost” of social media. We live in a digital environment where we own little, but everything seems free – where the real price we pay in personal information to advertisers is not immediately visible, and we’re told that in order to participate, we have no choice but to oblige.

Consider for a moment the type of future that Moti Krispil, CEO of eye tracking startup Umoove, describes (and warns about): “If you see a picture of Adele somewhere in an article, when you’re looking at her for more than 2 seconds, an Amazon ad could pop up suggesting you buy her latest record now.” For advertisers, this is a goldmine – there’s an enormous amount of value in knowing what groups of people pay attention to which types of ads. But what exactly do consumers stand to gain from this?

Tarun Wadhwa is a writer, researcher, and entrepreneur working at the intersection of technology and public policy. You can follow him on Twitter — @twadhwa — or contact him directly at VB@tarunwadhwa.com. Also, check out his upcoming book, Identified, which will be out later this year.