Nap rooms are so 2000s. Massage rooms are a dime a dozen. And the in-office gym has been around since at least the ’90s. So if you want to up the ante, attract the best talent, and have the most brag-worthy office in the world, you need more.

Like a full regulation fire pole that people can actually use to drop down a floor. Or an officially certified slide to get down to the lobby after a long day. Perhaps a cushioned and enclosed chill room.

Or even, believe it or not, a cattle walkway.

On a recent trip through Ontario, I toured Google’s first office in Canada — and talked to the engineer who leads Google Canada, a former startup guy in Silicon Valley and native Canuck, Steve Woods. If you use mobile Gmail, a Chromebook, Google Maps, Google Calendar, or Google Fiber, there’s a good chance you’ve touched something built at Google’s offices in Waterloo, Ontario.

And if you ever get the opportunity, those offices are definitely something to touch as well. 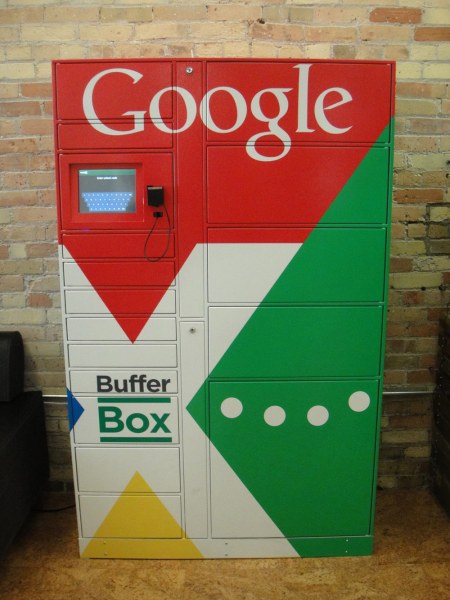 Above: A BufferBox for all your packages from Google's latest Canadian acquisition.

That’s one reason he decided to accept Google’s offer to leave the Valley, return home, and “figure out what we should do in Canada and do it.”

In 2008, when Google opened the office, Waterloo and London were the company’s two centers of mobile excellence — likely due to Waterloo’s proximity to then-leading smartphone manufacturer BlackBerry. So Waterloo and London pioneered the mobile version of virtually every service Google offers: Maps, Gmail, Calendar, mobile search, and more. Waterloo, which now boasts about 200 engineers, also hosts the team that built Google Fiber’s user interface and critical software for the Chrome Pixel, Google’s answer to Apple’s retina display, with full touch integration.

The office is located in a formerly industrial building that once housed a tannery, believe it or not (hence the cattle walkway). Google shares it with a number of accelerators, startups, and coworking spaces that together make up Communitech, a startup mecca with strong connections to Waterloo University, angel investors, and venture capitalists. 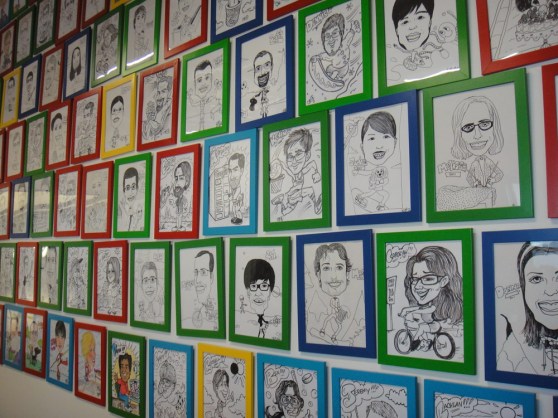 Above: The Googlers who work here. After a year, their drawing gets colored in.

Woods, whose recruiting strategy is to get ex-patriate Canadians to move back as well as to draw new talent from the nearby Waterloo University, says that it’s an attractive place for Googlers for a variety of reasons — not just the fire pole or massage room.

“There’s fewer bosses here, or at least they can’t find you,” he jokes. “At least a third of the people here have moved back from California.” 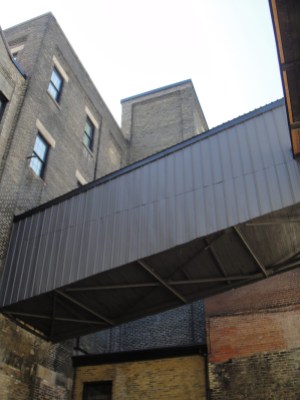 Above: The actual cattle walkway

Woods says that Google’s most internally unpopular and controversial product ever was built in Waterloo as well: Conversion Optimizer. That’s a piece of software for advertising buyers that Google calls the “just trust us and push the button button,” which essentially hands your advertising campaign over to Google to optimize for the cheapest and most effective ads.

“It was extremely unpopular in Google,” Woods told me. “People were wondering: How much money will we lose? They were worried that advertisers would optimize their ad spend early in the month, hit their caps, and stop buying.”

Google’s known for taking risks, however, and the company ultimately decided to go ahead despite the chance it might actually lose money. Now, the product is one of Google’s most popular for advertisers, and it manages “many, many billions of dollars.”

“It took a Nobel prize-winning economist to prove that was untrue,” Woods said. “It’s great for Google, great for advertisers, and great for surfers.”

And another product Waterloo build that Woods is particularly proud of is what he calls “the largest project Google has ever done.”

It’s the first mobile search transcoder, which was an infrastructure that rendered web pages on Google’s own internal servers, decided which bits were most important for mobile phone web users, and sent only those bits. It sounds like something for the presmartphone days of historical antiquity, but not so.

“It’s still a very fast-growing project,” Woods told me. “The volume is staggering … billions of pages per day in countries in the third world, and even in the U.S., it’s still growing.”

So … why in Waterloo, Ontario? 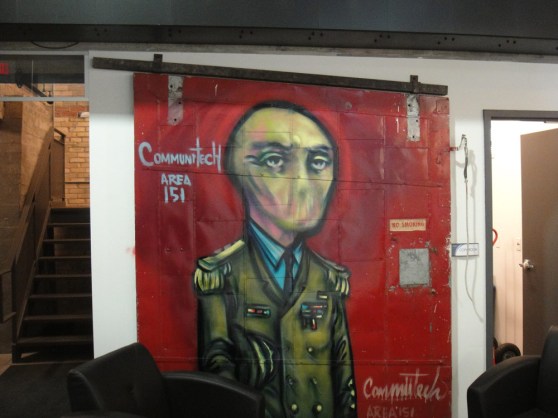 Above: Communitech, the community in the building that includes Google.

“Something interesting is happening here,” Woods says. “The university produces an amazing kind of talent … and people that come into Google from the University of Waterloo do disproportionately well.”

Worldwide, he says, Waterloo has been one of Google’ top three or four recruiting centers for some years now. And, he adds, not everyone who wants to work for Google wants to live in California.

“This area has a very high proportion of startups to population,” he adds. “Google loves startups, and we love to hire entrepreneurial people.”

Oh, and the slide?

The office has a plastic red slide down from the second-floor Google reception area to the first-floor entrance. It has a prominent sign, “For Googlers Only,” which a PR rep told me was placed there because Ontario’s provincial slide inspector (yes, they have one, apparently) raised some concerns about safety.

I was bad, however, as I frequently am, and went down the slide anyways. The PR rep forgave me, as you can see in the video below: