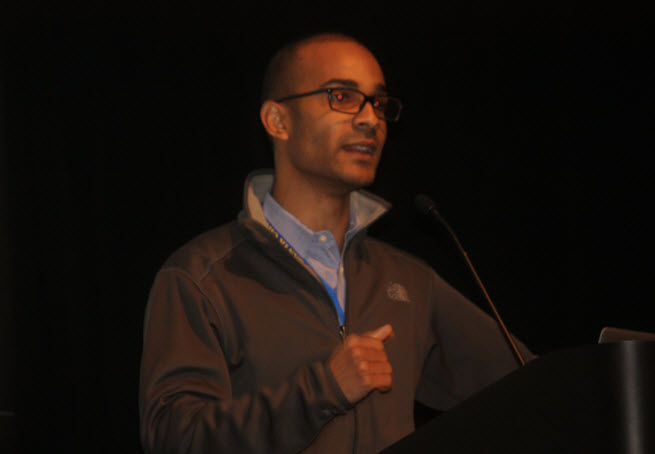 Disney has found that it can improve the experience and engagement of its guests at its theme parks by building deeper stories and light adventures into the settings and rides. In doing so, it brought lessons from movies and video games into the real world of guest entertainment.

The Imagineers wanted to reproduce in the theme parks the feeling of extended, engaged entertainment that people get from great movies or video games, said Asa Kalama, the creative director for Walt Disney Imagineering Research & Development. Imagineering is responsible for creating the rides at theme parks like Disneyland and Disney World, and the job of the Imagineers is to find cool new technologies that can be integrated into the fantasy entertainment in the parks. He spoke about the experiment at the Interactive Storytelling Symposium on Friday at the Computer History Museum in Mountain View, Calif. The event was sponsored by the University of Santa Cruz’s Center for Games and Playable Media.

In the past, Disney moved into digital characters by showing off animated creatures such as the alien Stitch from Lido & Stitch in its Paris and Hong Kong theme parks. Those “living characters” held unrehearsed, real-time conversations in French and English with children in the parks. Disney used its own proprietary software to respond to queries in a different way for each show, depending on the questions it received from the audience.

“The guest feedback from the living characters was absolutely phenomenal,” Kalama said. “Guests didn’t just sit back and spectate. They go to actively participate. So we decided to take that same paradigm and apply it to everything. What if we decided to let our guests participate in ‘living stories.’ We have all of these amazing experiences, parks built with great play sets. Why not use them to tell our own emergent story experiences?”

The Disney Imagineers saw they had a big opportunity because they had amazing sets in the fantasy environments at the theme parks. It had staff that it called “cast members,” and so the situation was ripe to build movie or game-like experiences.

Kalama said the team envisioned experiences that were like movies where the character was immersed in a virtual world, such as West World, The Game, or The Truman Show.

“The guests get to live their own story, with a narrative overlay on the experience that can last a whole day,” he said.

“The critical thing is whether this is a fun experience,” Kalama said. “We had to test to see if this is something that our guests wanted.”

They conceived experiences like a multiday pirate adventure, where guests had to move to a certain location and dig up pirate treasure. There were activities such as fireworks roped into the story. But it was a pretty expensive experience, with a lot of staff workers involved. To make it scale more broadly, Disney had to consider how to automate the storytelling.

The team created a “story engine” using software. They needed an “artificially intelligent director” that could create narratives on the fly for the guests. It would write scenes for the guests as needed in response to what they were saying or doing.

They partnered with Georgia Tech University experts and filmmakers. They built a story-authoring tool. It would take an example of a good story and then remanipulate the scenes within it to create a unique experience for the different guests. Then they did a play test. They found that they were initially creating stories with way too much backstory that the guests didn’t want to learn or read. Those backstories just got in the way of the experience, and so the Imagineers scaled that back.

“We didn’t give our participants enough credit for creating their own backstories,” he said.

They also made use of their live cast members to participate in the stories. In the stories, the guests were assigned goals that had to be reached. The Imagineers didn’t care how those goals were reached, so the guests could create their own paths to reaching the goal. The tests showed that the guests didn’t really want to change the ending or influence it. They were happy to reach the desired ending, but they wanted to get their in a different way. They could pursue a bunch of tasks in any order they wanted.

Then they tested it. The results were enthusiastic. They also started taking the stories that people performed and using them for future stories.

Kalama said, “The guests loved the experience. Our experience showed you had to have a clear qualitative and creative vision that was entirely guest focused. You pick the right tools for reach the goal that you know the guests want. Don’t choose your tools first.”