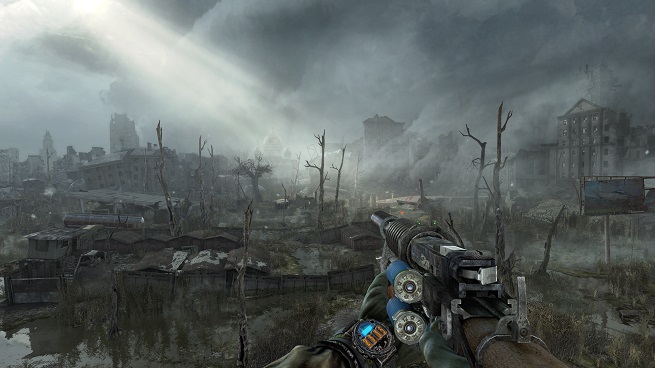 I was running out of time and ammo. Mutated wolves, freakish crustaceans, and a flying demon were relentlessly hunting me through the swampland. According to my watch, I only had 15 seconds left of breathable air in the gas mask. I had two choices: either let the wildlife eviscerate me from head to toe or suffocate to death from the surface’s radioactive atmosphere.

Welcome to the harsh world of Metro: Last Light.

Developer 4A Games returns to post-apocalyptic Moscow in this sequel to Metro 2033 (out May 14 for the Xbox 360, PlayStation 3, and PC). The studio based its first-person shooter series on the Metro books written by author Dmitry Glukhovsky. Just a few months ago, the future of Metro: Last Light was uncertain when original publisher THQ closed down due to bankruptcy, but Deep Silver (publisher of the zombie-slaying Dead Island games) picked up the publishing rights for $5.8 million during the THQ auction a few weeks later.

The interruption doesn’t seem to have affected Metro: Last Light in any meaningful way. 4A Games crafted a rich, beautiful world fraught with danger, political conspiracies, and supernatural forces. 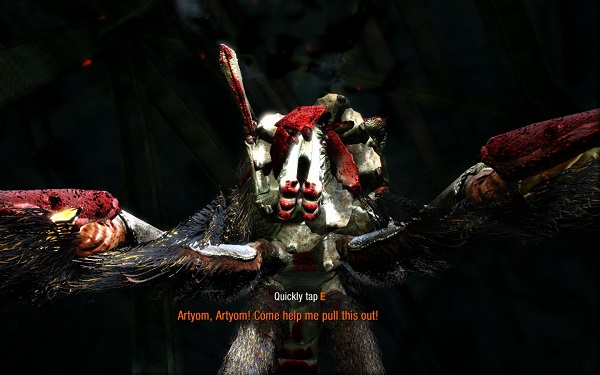 The unshakeable sense of dread

Twenty years after nuclear missiles scorched the planet (an event stemming from World War III), Moscow is a wasteland. All sorts of monstrosities have risen from the ashes and claimed the Russian city as their turf while other creatures chose to go underground where the remaining survivors try to live a normal life. Death looms at almost every corner.

This is clear when you first step foot on the surface. Between the pockets of intense radiation and the wildlife that slithers, swims, flies, or runs across the landscape, I was always nervous when Last Light took me back above ground. Part of that anxiety comes from a sort of tactile connection that develops during the non-shooting portions of gameplay: the act (and squeaking sound) of wiping your gas mask to remove any blood or goo obscuring your vision, repeatedly charging your electrical equipment by rapidly clicking the mouse, or flicking on your lighter in places where your flashlight just doesn’t work.

As the elite Ranger known as Artyom, you’re not some avatar in a virtual shooting gallery. You’re an active participant, a citizen of the Metro. A survivor. And once you feel like you’re actually a part of the fiction, the threats amplify tenfold. The hostility isn’t limited to the world of the living, either. Remnants of the dead — those who died from the blasts — appear in the form of ghostly apparitions and disembodied voices whispering to you in the darkness. Last Light isn’t a pure survival-horror game, but the creepy elements it uses are enough to make you paranoid.

The tension can feel overwhelming at times, so a series of Metro stations that people have transformed into towns serve as much-needed breaks. They’re more than just trading posts, however. You feel as if real people have lived in these places for years. You learn this from the numerous conversations happening all around you. Some folks are refugees escaping the tyrannical rule of the Nazis or the Communists (at the end of the world, it seems divergent political ideologies are stronger than ever). Others are humble merchants who will gladly take your pristine pre-apocalypse bullets — Metro’s form of currency, which you can also use as ammo — in exchange for their wares. And some are just thieves, looking to scam the next poor bastard who walks their way.

Even your enemies, if unaware of your presence in the shadows, tell fascinating stories. One group I snuck up behind were sharing superstitious tales, like the story of The Tunnel Keeper, a mysterious Pied Piper of the Metro who commands its followers to travel into the dark tunnels. They’re never heard from again.

These conversations are shining beacons of life (or whatever’s left of it) in the otherwise bleak future that Last Light depicts. You can see the weariness on the survivors’ faces. But, somehow, they’ve found a way to go on with their lives after the bombs had dropped. I found this oddly comforting.

Metro: Last Light looks stunning. If you have the means to, you should definitely play this on a PC. Even my ancient machine, which is slightly above the minimum requirements, was able to run one of the most visually striking games I’ve ever seen. The developers sculpted a gorgeous painting out of the charred and broken buildings, bridges, and streets of post-fallout Moscow. The same is true for the labyrinthine tunnels and city states of the Metro system where gas lamps illuminate the dank walls and filthy homes of its tenants in gritty detail.

It makes me jealous for those who are able to run Last Light at its “optimum” settings, which require, among other things, a $1,000 Nvidia graphics card. If you fall into that camp, pat yourself on the back. You’re in for one hell of a visual treat.