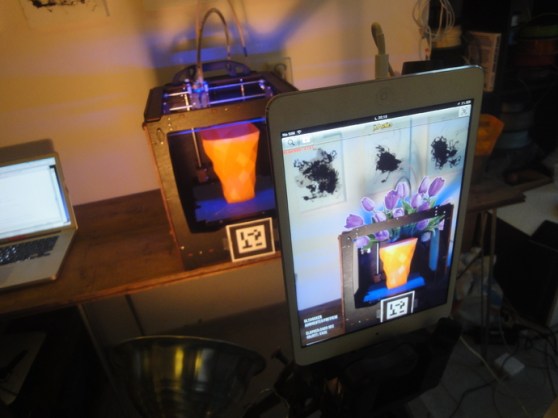 So what happens when you combine them? This question was at the heart of a project created by Dutch new media artist Sander Veenhof and designer Joris van Tubergen, who fused the worlds of 3D printing and augmented reality in a really interesting way.

The concept, dubbed the “UltimARker”, allows 3D printer owners to get a real-time preview of their 3D designs as their devices create them. Along with the design overlay, the UltimARker (which is a play on the name of the Ultimaker 3D printer and “AR” or “augmented reality”) also displays information like how long the printer’s been at work, and, in theory, how long it will take a job to complete. You can see how this works in the video below.

While the project doesn’t seem to have all that many practical applications yet, it is a very interesting proof of concept of what happens when you combine two technologies that don’t seem to have very much in common. With the idea of augmented reality glasses and 3D printing both becoming increasingly popular, you can expect to see projects like this a lot more often.

Here’s a link to the project’s Thingiverse page.