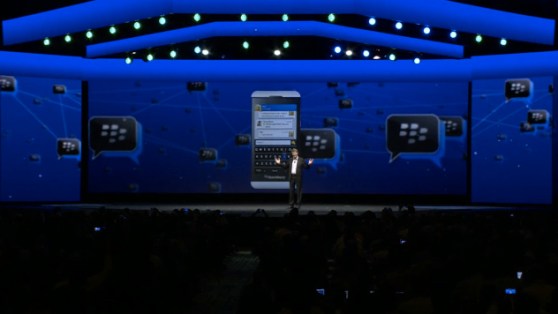 BlackBerry managed to squeeze in one surprise announcement during its huge conference keynote this morning: BlackBerry Messenger, the company’s popular messaging app, will finally jump to the iPhone and Android this summer.

This is the first time BlackBerry has brought BBM to other platforms, and it’s something the company’s fans have been begging for over the past few years. It’ll be available on iPhones running iOS 6 or greater and Android Phones running Android 4.0 Ice Cream Sandwich.

“We will make BBM available as the premiere multi-platform IM solution all around the globe,” said Thorsten Heins, Blackberry’s CEO, on stage today during the keynote. “Even better, it’s free.”

Heins boasted that BlackBerry Messenger already has more than 60 million users (not a huge surprise, since it’s a popular feature among the company’s 80 million users) and more than 10 billion messages are sent every day through the service.

“Why are we doing this now? It’s a statement of confidence,” Heins said. “The BlackBerry 10 platform is so strong and support has been so good that the time is right for BBM to become an independent messaging solution.”

He calmed the BlackBerry faithful by confirming that the company will still offer the “premiere and most integrated” BBM experience. Initially, iPhone and Android BBM users will be able to send chats and join BBM groups. But eventually the other platforms will see all of the BBM features out now, including screen sharing and voice and video chat.

Heins also announced BlackBerry Messenger Channels today, which is a way for brands to send messages directly to their fans. Think of it like a Facebook brand page located entirely within BBM. Brands will be able to send news updates to followers as well, so it will function almost like a news reader.

With the launch of channels and the promise of multi-platform compatibility, Blackberry Messenger is increasingly becoming the most interesting Blackberry property.