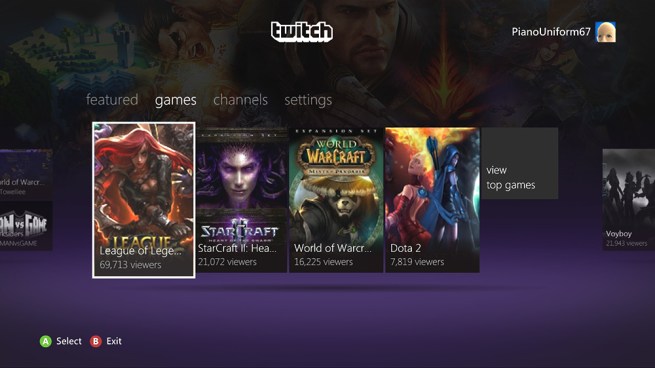 Gamers don’t just love playing games — with sites like the gameplay-streaming service Twitch, millions of fans also love to watch professionals and their friends play them.

Now, Twitch is teaming up with Microsoft to release an official app on the Xbox 360 today that streams Twitch broadcasts directly through the console. This expands the potential viewership of Twitch, which already has 34 million viewers every month.

“Our app for Xbox 360 brings Twitch video to the television and into the living room of millions of Xbox Live members for the first time,” Twitch chief executive Emmett Shear said in a statement. “The app will let every Xbox Live gamer find and watch streams of their favorite games from their couch. Given the huge number Xbox owners and how many of them love gaming spectatorship, it’s a natural fit to bring the Twitch experience to the 360.”

The Twitch Xbox 360 app does not enable gamers to stream their own content to the service. That should bum out some Xbox 360 players that are looking for an easier way to broadcast their content.

“We’re very excited to create more amazing Xbox 360 experiences,” Xbox general manager of content acquisition Martin Sacchi said. “Twitch brings a whole new category of live gaming video content that Xbox 360 owners will love. Now you can get your fill of playing a game, then stay right there on Xbox Live and continue the experience by watching the world play.”