In the first quarter of 2013, a third of smartphones sold in the U.S. were prepaid, double the amount from the previous year. Apple’s share of the prepaid market? A mere 8 percent.

People are just trying to get the best long-term deal, says Stephen Baker at the NPD Group:

“In a quarter without a major product launch from either of the two market leaders, consumers refocused their attention away from the postpaid wars and toward finding the best value for their dollar.”

Those two market leaders, of course, are Samsung and Apple. But Apple is hardly even a participant in the prepaid market. 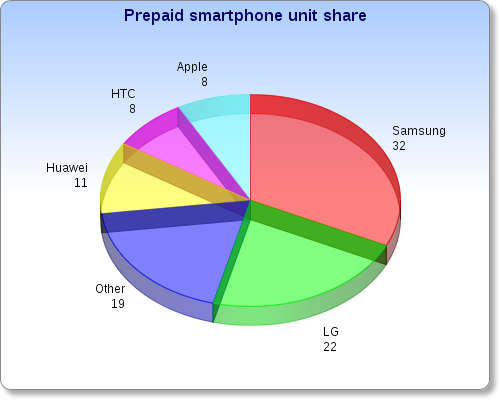 The portion of the market sold prepaid has been increasing for years, says Baker.

“Sales of prepaid smartphones doubled from the previous year, continuing a string of more than 12 quarters of triple-digit sales increases.”

Apple’s share looks tiny, especially in a U.S. market where it has dominant market share, but it has quadrupled year-over-year since the first quarter of 2012. However, with the prepaid market growing so quickly, Apple’s latest –and typically expensive — phones have not been the big sellers. Rather, it’s the year-old iPhone 4S that is Apple’s leading contender in prepaid, just as one of Samsung’s top prepaid sellers is the now somewhat aged Galaxy S II. 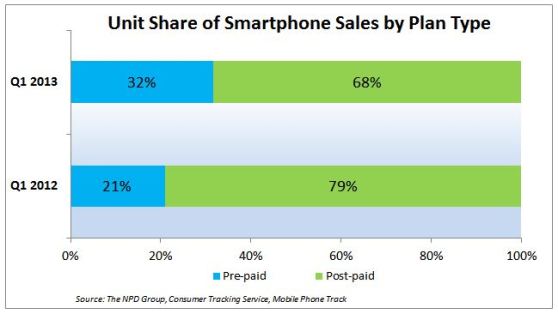 Even outdated models get pricy — the iPhone 4S can cost $400 to $600 unlocked and brand-new, while the Galaxy S II can be between $300 and $400. But consumers make up the heavy upfront cost by saving on cheaper plans, potentially saving hundreds, if not a thousand dollars over the lifetime of their phones.

For Apple, however, capitalizing fully on this fast-emerging market trend means bringing out a cheaper iPhone that can be sold as a new, current model-year device at a price point closer to Android models from Samsung and LG. And Samsung has some work to do, too — while its market share remained stable from 2012 to 2013, competitors such as Apple and HTC have gained share.

“Prepaid has proven to be a real winner for national retailers,” said Baker. “The easy purchase cycle and grab-and-go nature of the product play into the strength of large-format stores. Certainly, companies like AT&T recognize this shift in purchasing as they ramp up their focus on prepaid phones with their recently announced ‘Aio’ product branding initiative.” 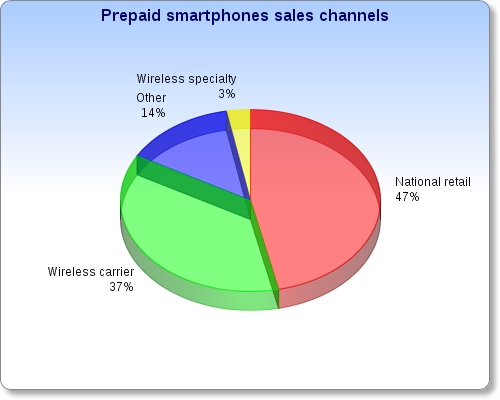