The case, which was filed in April 2012, is finally coming to trial in June. And in new documents that the government filed, the attorney general paints Apple as the ringmaster. All of the other original codefendants, including Harper Collins, the Penguin Group, and Simon & Schuster, have already settled with the government, leaving Apple as the sole defendant.

As the saying goes, them’s fightin’ words. And Apple is fighting back.

“Apple has not ‘conspired’ with anyone, was not aware of any alleged ‘conspiracy’ by others, and never fixed prices,” the company stated in a reply to the suit last year.

The trial is set to begin on June 3. 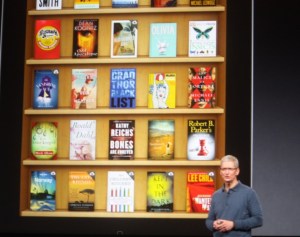 The DOJ is pointing to an email from Steve Jobs, in which he told Rupert Murdoch of News Corp to “throw in with Apple and see if we can all make a go of this to create a real mainstream e-books market at $12.99 and $14.99” as evidence to the contrary.

But Apple says that it was simply establishing the currently accepted agency model of pricing, in which publishers set the price and e-book stores simply sell at that price. That contrasts with the wholesale method of publishing, in which retailers buy books from publishers at whatever price they can negotiate and then sell the books to consumers at whatever price they wish. That is, of course, the model Amazon prefers.

Legal experts such as antitrust author and University of Hartford professor emeritus Dominick Armentano have said that Apple is likely to prevail, since the seller in an agency model market does not actual set any prices. In other words, if there was price-fixing in the agency model, it would have to be undertaken by the publishers themselves.

The bigger question here for Apple and its fans is how Apple used its power in mobile apps to strong-arm publishers such as Random House into agreeing with the deal. According to the DOJ filing, Apple blocked approval of an e-book app from Random House in 2010 until the publisher signed the agency deal.

That’s clearly dirty pool, and using power in what was then an almost all-powerful Apple smartphone ecosystem to influence — or compel — partner behavior in the ebook market.