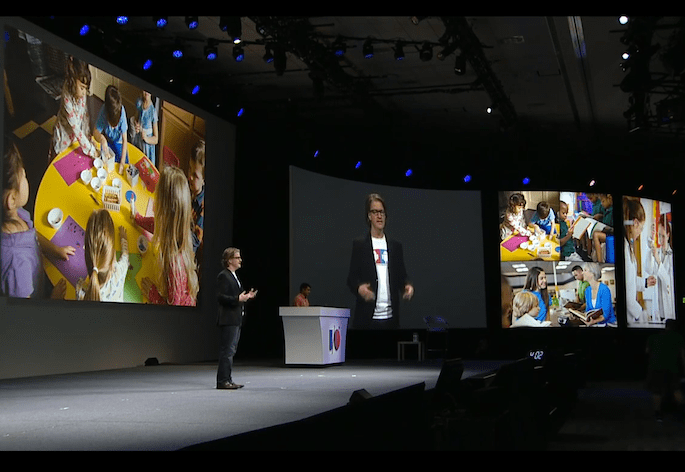 Technology changed the way we socialize, find new things to do, get directions, play games, date, work, read news, take pictures, and so much more. But some feel it hasn’t done enough for education. We’ve seen attempts to get new PCs in classrooms, and now there’s a big push for tablets in the hands of every student. But device costs along with theft and content management cause schools to shy away. Google’s Play for Education program may dramatically change all of this.

“When I go visit my kids’ classrooms, it looks pretty much exactly like it did when I went to school,” said Chris Yerga, Google’s engineering director at Google I/O. “Teachers told us that in education, there’s a huge gap between what’s possible with technology and what’s practical, especially with mobile technology. And then they told us it was Google’s job to fix this.”

He explained that teachers said Google should make an affordable Android tablet, content management tools, and app discovery tools. So Google is starting with the last two.

Google Play for Education is like an app store designed especially for teachers with some powerful management tools built-in. Teachers will be able to visit this app store and search by categories such as age-range and subject matter. If you are trying to teach math to a bunch of first graders, you can plug in those refinements and get back a list of apps made specifically for that group.

Teachers will also be able to see reviews from other teachers. After instructors select an app, Google Play for Education will push it out automatically to all the tablets associated with a defined Google Group of students.

That’s the catch — you’ll need to set up your entire classroom on Google Apps, buy Android tablets for all the students, and create a Google Group with the tablets hooked up. The only real issue here might be cost, as Google Apps are fairly easy to set up and many education institutions are already using them.

Schools are able to load accounts with funds for the app store, so a teacher can automatically deduct from that balance if they wish to license a classroom-amount of paid apps. Teachers will also be able to push out YouTube videos and books in the same way they do apps.

Apple over the last year has put a lot of emphasis on the role of iPads in schools. It has tested a number of different markets, and developers have created some very beautiful apps for interactive books and other learning software. But the program is lacking structure and, of course, iPads are also cost prohibitive for many schools.

Google Play for Education could have the right kind of management capabilities to make Apple step up its game, but only if it’s actually as easy to use as it seems.

The program will be available this fall, but app developers can start submitting apps by this summer.

Educators, we would love to hear your thoughts on whether Google Play for Educations is what you wanted from Google. Send us an e-mail!