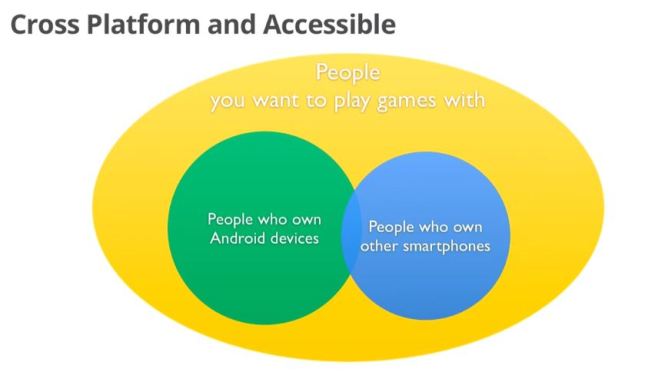 Google is making a big push to get game developers on board its ecosystem at its annual I/O developer conference. For game studios, one of its big new products at the event  is Google Play game services, which the company announced during its keynote presentation earlier today.

Google Play game services is an ecosystem that developers can tap into to provide cloud saves, achievements, leaderboards, and multiplayer to mobile games. One of the most interesting aspects is that Google isn’t just enabling this technology for Android — Play game services also works on Apple’s iOS.

During a session with Google’s leaders on the project, the company explained why it wants the services to work on iOS.

“We want the whole world to play together,” Google developer advocate Todd Kerpelman said. “I know that’s a little bit touchy-feely — kids holding hands around the world — but at the core level, it’s really true. All of us on the team are gamers. By that I don’t mean that we just play games — we haven’t had a lot of time lately — it’s more that we understand that games are powerful.”

Google’s intent with these new services isn’t just enabling players to pick up a game on their PC that they left off on an iPad. It wants thsoe on one platform to play against another without any hassle.

This technology is powered by a special kind of API that is accessible by any connected device. Martin said they don’t want to exclude any piece of hardware. That means phones and tablets but also Macs and PCs.