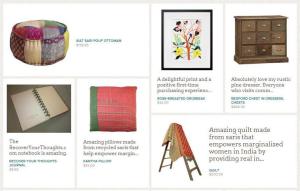 Bing Gordon, partner at Kleiner Perkins will also be joining the Luvocracy board.

Luvocracy is a San Francisco-based startup that lets you buy products you “luv” based on recommendations from the people you trust. You can also earn rewards if someone buys a product you recommend.

“Recommendations are an ancient thing; it’s different than reviews,” said Nathan Stoll, chief executive, and co-founder of Luvocracy, in an interview, recalling the story of his grandmother who sold Avon products. “It’s part of the way we think. It’s someone you know and trust saying: ‘Go get that.’”

Stoll, an early Googler, co-founded Aardvark, the first social search engine, which was acquired by Google in 2010, sending him back to his alma mater.

His current co-founder, Roger Barnett, was founder and chief executive of Beauty.com and the chief of Arcade Marketing.

Luvocracy layers the social graph on top of a direct sales model to enable a world of curated commerce, according to the company’s website. It competes with popular social commerce startup Wanelo.

The company has recruited one of Pinterest’s most influential users, Christine Martines, who has a following of over 5.5 million users, to quickly build a community of early users.

“Luvocracy as a technology is about connecting the right recommenders and making it possible to take their social content and make it seamlessly buyable,” a rep from the company told VentureBeat. “It does that with a blend of algorithms and human support to make sure it’s done right.”