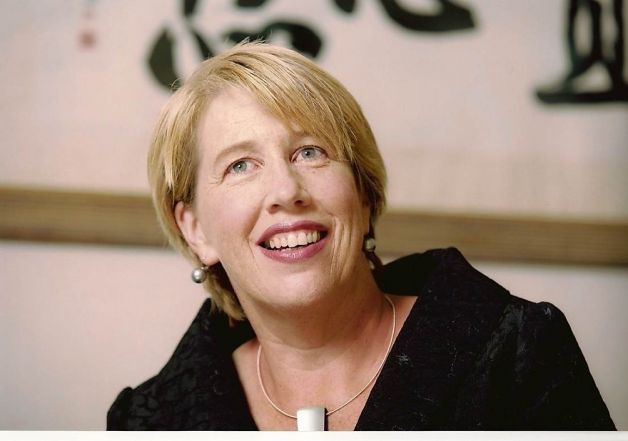 At the Google I/O developer conference today, Mary Lou Jepsen bemoaned the lack of hardware innovation in the tech world.

“For the devices we use … the funding models are completely screwed up,” she said. “Angel funding isn’t sufficient for hardware.”

And that’s at least part of why she’s working on a hush-hush hardware project for Google X.

Google X is the division of Google that produced Google Glass. It’s run by Google cofounder Sergei Brin and operates as a skunkworks within the company — a sort of magic factory where ideas are shoot-for-the-moon big and projects are shrouded in secrecy.

Jepsen said she’s not too comfortable with “the sharp elbows and politics of larger companies.” But we’ve heard that Google X operates a bit more like a startup within Google. Her coworkers at X include Android founder Andy Rubin and former Google Maps chief Jeff Huber.

“Google X is the hardware division of Google,” Jepsen said. And while she couldn’t say too much about the hardware followup to Glass, she gave the I/O audience a few clues.

“For me, it all came together in displays,” she said. “How do we get data to all the people of the world, not just the rich people?”

That sentiment alone echoes Google CEO Larry Page’s keynote yesterday, a speech that was all about creating global opportunity and equality through technology. For Jepsen, that principle is the backbone of a huge part of her career, One Laptop Per Child.

Jepsen founded OLPC, designing the first the $100 laptop in the process. “It was just me for the first 18 months, then we grew to the massive size of four,” she said.

Her next move was Pixel Qi, a display company that uses existing manufacturing lines to make screens with vastly lower power consumption needs and increased readability in sunlight.

When it comes to making hardware, she said, “There’s not much competition, so there’s an advantage.” Unfortunately, the competition that does exist is more likely to come in gargantuan form — giants like Samsung and Sony. Her advice: “Don’t do something small.”

She also told the entrepreneur-heavy audience, “VCs don’t have the core competence to fund or even do due diligence on hardware. … You have to be creative to fund it.” While Google’s warchest funds the new projects for Google X, she suggested looking to the more forward-thinking superangels and hackerspaces for resources and funds.

One interesting difference in Jepsen’s entire hardware experience and the modus operandi for Google X/Google Glass is the country of origin for devices. Google Glass is made in the United States; so was Google’s other homebrewed hardware project, the Nexus Q.

Jepsen, on the other hand, has a huge amount of expertise in Asian manufacturing. In fact, she actually moved to Asia and learned Chinese as part of her founder experience for OLPC.

“These days, the manufacturing is controlled by a small number of countries, primarily Taiwan and South Korea,” she said. “You need to figure out how to deal with cultures, but it’s freed me for the last decade .. Basically, all I have to do is get a whole bunch of people to say yes. They say no 99 percent of the time.”