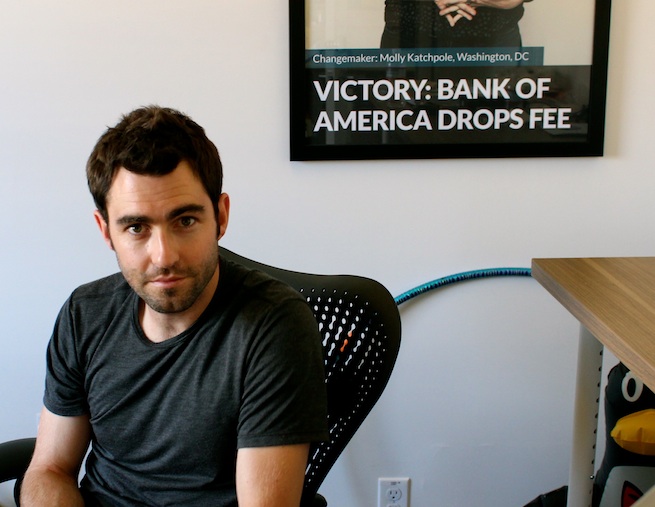 When people run into major problems with the health industry — trying to get money from insurance companies or to get access to an experimental drug, for example — they’re no longer just turning to lawyers. Increasingly, they’re turning to online petitions.

One petition website, Change.org, has already seen over 7,000 health-related petitions come through — with some big successes.

Chief executive Ben Rattray, who is speaking at VentureBeat’s HealthBeat conference next week in San Francisco, explained that that he has seen people successfully take on big-name organizations like the USDA and insurance providers — and those successes inspire him. Indeed, healthcare companies are often quite inaccessible despite the fact that they’re involved in such a sensitive and critical aspect of life.

Change.org isn’t focused exlusively on healthcare or health tech. The company helps people petition specific leaders on any issue. But health-related issues have quickly become one of the most popular topics on the site.

We chatted with Rattray to see just where his company fits into the healthcare conversation:

VentureBeat: What role does Change.org feel it plays in grassroots health activism?

Ben Rattray: Our role is to empower people everywhere to create the change they want to see. We’re an open platform and therefore don’t advocate for campaigns ourselves, but we are a place where parents and siblings and friends who haven’t been able to make their voices heard are starting petitions on behalf of their suffering loved ones. We think people deserve to be part of the decisions being made that affect their lives, so we’ve created a tool that gives them a voice in that conversation.

VentureBeat: How many campaigns has Change.org hosted and what kinds have you seen?

Rattray: More than 7,000 people have started health-related petitions on Change.org, covering every health topic imaginable. One of the most popular topics is around medical coverage from major insurers. For example, last year a young man from DC named Jason Warren successfully petitioned Blue Cross Blue Shield to cover his father’s recovery from a heart attack after gathering 190,000 signatures — a shift we have seen many insurers make in response to petitions. Another popular topic is healthy food; in one campaign last year, Bettina Siegel, a mom in Texas, successfully petitioned the USDA to stop packing “pink slime” in school lunches in just one week with more than 250,000 signatures –  after health advocates had been working on the issue for 10 years.

VentureBeat: Why is this, in today’s digital age, more powerful than picking up the phone and talking to your representative?

Rattray: There’s still value in many types of civic action, including picking up the phone. But on a phone call, you’re just one person with an opinion. On a petition, you’re a member of a collective movement, and your voice is shared publicly for everyone to see. Even if they want to, there’s no way a government official or company can ignore your comment – it’s like a highly visible time capsule of public sentiment.

Take Jenn McNary, the mother of two boys with a rare, lethal disease, Duchenne Muscular Dystrophy. One of her boys had access to a medical trial for a new drug, and his condition improved dramatically. Her other boy doesn’t have the trial drug, and his muscles are deteriorating rapidly. Soon, he’ll lose all upper body strength, and he won’t be able to eat or drink on his own.

Jenn’s petition asks the FDA to approve the medication through the Accelerated Approval Program, which expedites approval of drugs that treat serious diseases. Jenn could have picked up the phone – and trust me, she has, many, many times. But it was her petition, with its 179,000 signatures, many from parents of other DMD-afflicted kids, that got her a meeting with senior FDA officials. Jenn just sent us an email a few weeks ago saying they were “extremely supportive, engaging, and receptive” to her ideas – so things are looking up. That’s the power of the Change.org platform.

VentureBeat: Do you believe Change.org is really making a difference? Can you point to any successful campaigns?

Rattray: We’ve seen hundreds of health-related victories. The 28-year-old UC Davis student whose radiation treatment was finally covered by Anthem after four long weeks of appeals. The 21-year-old severely disabled student who got Medicare to continue her nursing care through the end of college, when she could move back home for support from her family. The Ohio woman who got Governor Kasich to add autism benefits to the state’s essential health benefits package. The list goes on and on. The question of whether petitions can have an impact is by now clearly answered – they can and do every day.

VentureBeat: Do you see spikes in health petitions around current events?

Rattray: We may see a small spike around, say, the Affordable Care Act — people who want it passed, people who don’t want it passed — but in general, it’s pretty consistent. That’s because our platform is really built for micro-movements: small, personal petitions replicated hundreds or thousands of times over across cities, states, even countries. At Change.org, we deeply believe in the power of starting local and building movements from the ground up instead of jumping on huge national problems and trying to tackle them from the top down.

VentureBeat: What role can social media sites play in health activism? Are they too unorganized to make a real difference?

Rattray: Social media sites can play a crucial role in raising awareness about health issues. Where they sometimes fall short, though, is translating that awareness into effective, coordinated action. That’s where Change.org comes in; because our platform is built explicitly to make changing the world intuitive and easy, it’s generally more effective than social media sites not structured for that purpose.

VentureBeat: Why should people use Change.org for health-related issues over creating a White House petition online?

Rattray: We’re big fans of the folks working on We the People, the White House’s petition platform. Over the past few months, we’ve actually worked with them on building out their API.

The Change.org platform is unique not only because it lets anyone start a petition about anything they care about, but also because people can target whichever decision maker has the power to do something. If the issue is political, sometimes that’s the Obama administration, but more often than not, it’s the director of a smaller government agency or the head of a specific task force. For non-political issues — say, an insurance provider who won’t cover a loved one’s medical treatment — you can use Change.org to petition the right people there, too. And it works — thousands of people have won their petitions using our site.

VentureBeat: If you could ask tech companies for any one thing to help Change.org health petitions get more attention, what would it be?