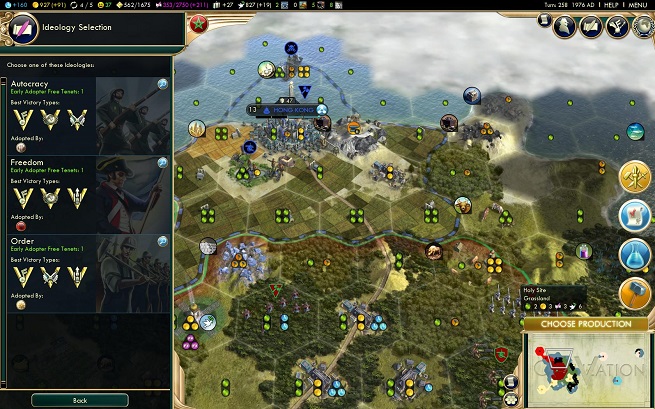 Under my leadership, Morocco had become the cultural center of the world. Culture flourished in my capital, Marrakesh, and it had become the top tourist destination (thus spreading my ideology to other places). I’d attracted more Great Artists and Great Musicians than any other Civilization, and my treasuries were flowing with gold from trade caravans established with every Civ (the Assyrians and the Polish) and city state on my continent.

Then the Zulus had to foul it all up.

With one vote at the World Congress, a council of the world’s Civs, the Zulus had brought enough support from city states on their continent to pass an embargo on Morocco, shutting down my trade caravans with every other Civ and sending me into an apoplectic fit as my balance sheet at once dipped deep into the red.

This is the Brave New World of Civilization V. The new expansion comes out for PC on July 9. The “Brave New World” aspect focuses on how, once you either reach the Modern Era or have a few factories, you have a new option under the your social policies to set ideologies, which then results in new choices among “tenets” to underpin your new ideology.

But culture is where it’s at with Brave New World. 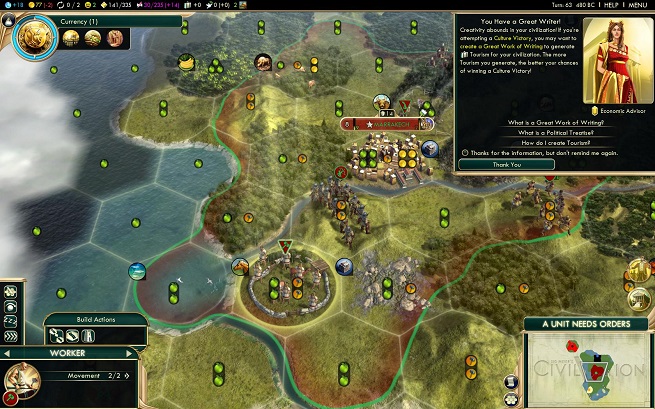 One of the first experiences you’ll have with Brave New World is with Great Artists, Musicians, and Writers. These new Great Persons create Great Works that fill slots in your cities, which come from buildings and Wonders, and these pieces of art, literature, and music bring in culture and tourism (this is just a mechanic — you won’t see people from other Civs traveling to your cities). You can also send these new Great People to other Civs on tours, which ups tourism and culture. You’ll see composers such as Johann Strauss (I settled him in Marrakesh and got the Great Work “Die Fladermaus”).

This came about, explains Brave New World lead designer Ed Beach, because when it came to pursuing relationships with other Civs, he noticed something was lacking.

“Tourism fulfills the second shortcoming we saw with the existing Culture Victory: namely that you could win one without really engaging with the other players in the game,” Beach said. “Now in Brave New World, you must make sure this amazing culture you created is spread across the globe and permeates the other nations of the world. Tourism is the mechanic that enables that spread.”

I decided early on to focus on generating these new Great People, and I was surprised at how easy it was to do so (and just how much culture I was generating). Later in the game, I was pulling in 400 culture (or more) a turn. It makes pursuing a cultural victory easier, and if you’re a player who prefers plowshares to swords, it gives you more options.

“The culture victory in the Civilization series has been popular among fans; it’s a play style that many people seem to naturally embrace. And yet we’ve never before allowed players to really put their own ‘signature’ on their culture as they progress toward a victory of that type,” Beach said. “Introducing Great Works and putting them into ‘themed’ museums and Wonders allows you to create something culturally unique, in sort of a parallel to deciding which military units you were going to assemble into your armies when you went off on a conquest.” 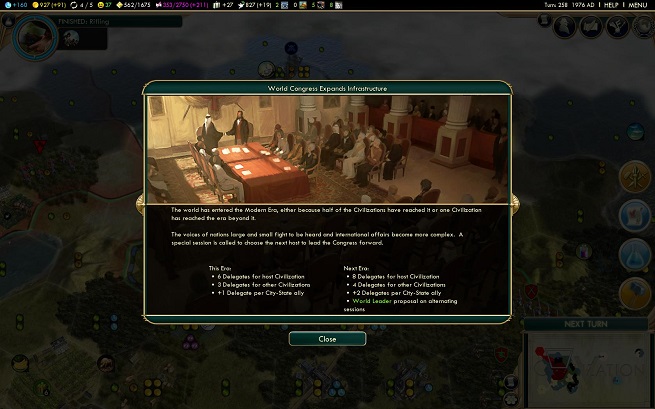 World Congress is now in session

The United Nations doesn’t come into play until late in a game of Civilization. The World Congress, however, appears much earlier — and it can have a great influence on how your Civilization grows and the diplomatic relations you have with other world leaders, as I discovered with my diplomatic pissing match with the Zulus.

Ah, the Zulus. Our feud started modestly during the first session of the World Congress — a gathering of the world’s leaders. I proposed a resolution banning happiness from pearls, rendering the resource rather useless. Every nation but one passed it; the Zulus threw every delegate they had against that proposal. This started us down a path toward a cold war, where our relations quickly soured from Friendly to Guarded to Hostile.

But my Civ was on another continent, making open warfare a challenge. So the Zulus decided to use a new weapon against me: the World Congress. Shaka and his gang started proposing resolutions against my interests, culminating in an embargo against me. With delegates the Zulus gained from their allied City States (one per ally) and World Wonders — and my allies committing delegates to other resolutions — Shaka was able to get a trade embargo passed against my Civ. This embargo is worldwide; no Civ would accept a trade caravan from me. I countered with my own embargo proposal, and in ensuing sessions, I mustered votes against anything that would help the Zulus and sponsored resolutions that would hurt Shaka.

And I started building an invasion force as well, resulting in the world’s first arms race.

The World Congress adds new interactions to Civ V, but it doesn’t replace the United Nations — it evolves into it.

“[The World Congress] now springs into action well before the Atomic Era that you would historically associate with the United Nations,” Beach said. “But when you do reach those later stages of the game, the World Congress continues its evolution and does become the U.N. It is after this transformation that a World Leader can be elected, and that Civ wins the Diplomatic Victory.” 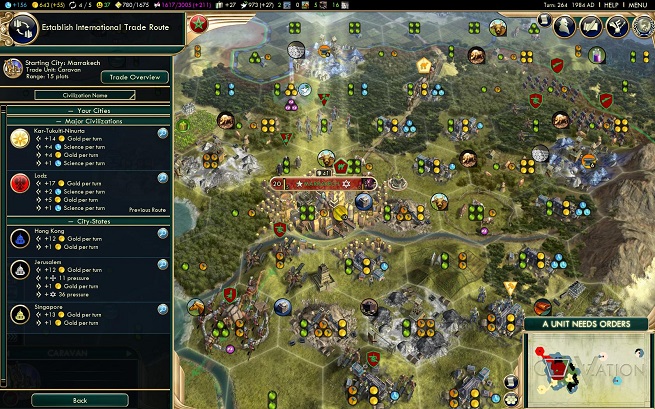 Brave New World also brings in trade caravans, special units that set up trade routes with Civs and city states. These don’t supplant trade routes; caravans also a second way to bring in cash. And as other Civs grow, the amount of gold that comes in builds up. In the modern era, I was getting significant amounts. I was able to establish new trade caravans with city states when the gosh-darned Zulus passed the trade embargo, which shut down my trade caravans with them (oddly enough, I could still trade luxury and strategic resources through the Diplomacy screen), and establish a new revenue stream.

Are cultural wins too easy now?

As I played with these news systems — and watched as piles and piles of culture accumulated — I worried that it would be too simple to pursue a cultural victory. But as my Congress feud with the Zulus shows, Brave New World comes with ways to keep you from simply winning through the arts.

Beach addressed these concerns. “We’ve been playtesting culture victory games for quite a while now to make sure we get the balance right,” he said. “During that time, we’ve had significant changes to how difficult it is to win the culture game. The biggest shift came when we finished tuning up the A.I. to really play the culture game effectively. It’s definitely a challenge now; I have no fears that it is too easy.

“In fact, in some games, when faced with a really dominant cultural A.I. such as France or Brazil [note: In my game, the Zulus crushed Brazil early], you might have to steer in another direction. It’s the equivalent of trying to win a Conquest victory when you are in the same game with Attila and Genghis.”

My final concern — and after my limited time with this preview build of Brave New World (about 10 hours), I can’t fully assess this — that the interactions between this systems, while rich, could be too complex and muddle Civ V’s existing game. But Beach is confident the resulting puzzle is one fans will enjoy.

“I don’t think any single system is very complex in Civ V. It is in the interactions between those systems where the complexity emerges, like religious pressure and science flowing along trade routes, or your tourism pushing the populace of other Civs to consider adopting your ideology,” Beach says. “It definitely takes some time playing with this expansion to get comfortable with all these interactions. But once you do, the web of interdependencies makes for a fascinating puzzle that holds one’s interest through the late game better than any earlier iteration.”