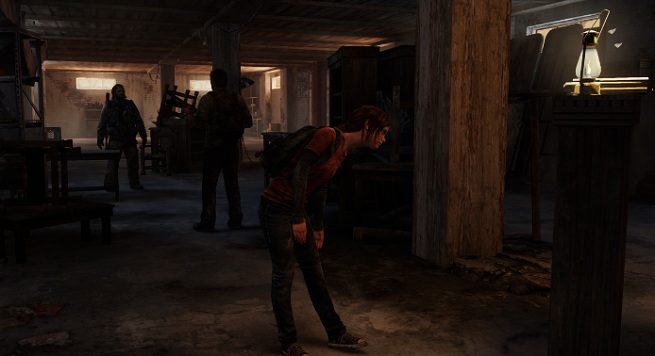 Sony’s upcoming The Last of Us is one of the most anticipated titles of the year because it’s filled with three-dimensional characters who move from one life-and-death moment to another in a world where the only thing that matters is surviving.

It seems like we’re getting to see about one level a year for The Last of Us, the new survival-horror game coming from Naughty Dog and Sony. But we’ll all be able to play the PlayStation 3 exclusive starting June 14, when it goes on sale. Last night, I and other reporters saw a new level and played it. And as my past experiences with The Last of Us, this one isn’t disappointing. It fits in with all of the other scenes that Naughty Dog has revealed that deliver a huge dramatic punch. 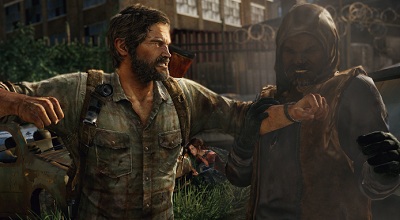 The PlayStation 3 game may very well be one of the most memorable of the current console generation. The scene I played lived up to those expectations, even though it might seem rather mundane on the surface. It’s set in a postapocalyptic future, where the human race has either been wiped out by a pandemic or transformed into hideous monsters.

Those monsters are either slow like zombies or fast like sprinters. And they’re not necessarily as deadly as the human characters who tangle with the main characters, Ellie (a 14-year-old girl voiced by actress Ashley Johnson) and Joel (voiced by Tony Baker). In this scene, Ellie and Joel need a car, and they track down Bill, an old friend of Joel’s who is either capable of finding a car or rebuilding one for them.

But Bill is hiding out in a small town, and it is protected by all sorts of booby traps. Bill has chosen to survive without the help of other people. He considers other people a liability, and he has protected himself with barricades and bomb traps. Ellie and Joel walk into the town and scavenge for everything. They have to figure out how to get past barriers. They can, for instance, set up a plank between two buildings to get past fences. They pick up things like lead pipe with scissors on it. 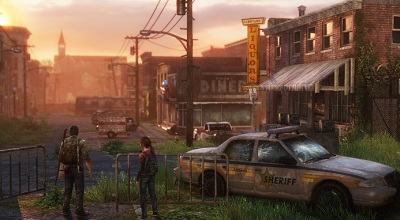 You’re tempted to pick up everything, since you know it will all be useful at some point. And you can craft the things you find into weapons or other potential lifesavers. I played the “Lincoln” level as Joel. The first time I saw one of the “infected” people, I just about fainted. I wasted a few bullets and scissor-pipes learning how to properly dispatch the attacker, who was quickly joined by a second foe. I found that brute force, swinging the pipe against the creature’s head and sending blood everywhere, was the most economical. I only had a handful of bullets.

As I got deeper into town, I had to dispatch more foes. But I didn’t have as much freedom to explore as I thought. Ricky Cambier, one of the game designers at Naughty Dog, told me afterward in an interview that the designers want to tell a story. That means they need to direct you down a path, and it doesn’t pay to give you too many choices when moving down that path. 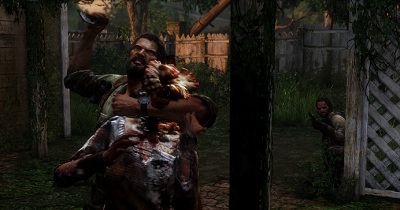 After all, you have choices where they really matter. Do you save that last bullet to shoot the “Clicker” coming after you, or do you use it to keep the bad guy away from Ellie?

In any case, I got a little frustrated looking for the path from one building to another. Sometimes that meant finding the one door that would open, the way up over a fence, or a wood plank that connected the buildings together. Moving from one backyard to another was a pain, particularly because Bill’s booby traps got in the way. You pretty much have to search everything, as you often find precious bullets in desks or notes written by other survivors that give story clues.

When you get to the point in the game where you have to make your decisions precisely, you’ll know it. In this case, Joel winds up in a trap and Ellie has to free him. But as he is trapped, the monsters come attacking. Joel has to shoot the ones coming at him and the ones attacking Ellie. At the same time, he has to preserve his ammo. Even the lead pipes break after you crack too many heads.

When the monsters were attacking, I cursed every time I missed with a shot or failed to completely take them out with a head shot. Agh, one more bullet wasted! And when I failed, the consequences were ugly. At some point, Bill comes out to rescue us, but then we have to run for our lives. It is just a few minutes of action, but it is harrowing. It’s the sort of action that can give you a heart attack.

Then Bill is just a plain asshole, as he is more upset with you that you have set off a bunch of his booby traps in trying to stay alive. And you discover from him that you have to go back out there and scavenge. But scavenging isn’t easy, because you can’t carry much stuff.

One of the riveting parts of the story is the growing relationship between Joel and Ellie. In this part of the game, she asks for a weapon so that both of them will be armed. He refuses her. Is it for a lack of trust? These are two of the last good people in the world, and yet they don’t trust each other. Their perspectives are interesting. Joel grew up before the pandemic, but Ellie has only known life in the hellish post-pandemic world.

The Last of Us is dramatic and frustrating at the same time. But it’s brilliant storytelling in a video game.