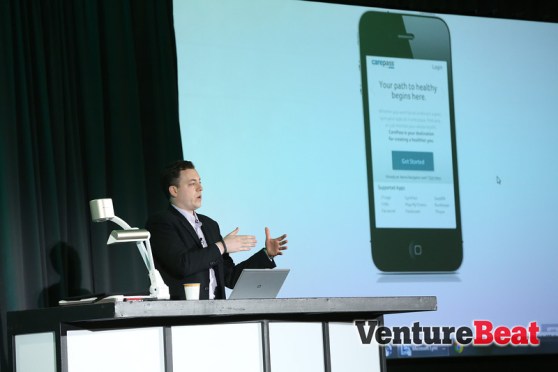 SAN FRANCISCO — Aetna, one of the largest health insurance providers in the world, is changing the way it thinks about itself.

Last year, chief executive Mark Bertolini said Aetna was no longer in the insurance business, it is in the information business.

Now, the company is turning into a fitness app maker too. Next month, Aetna will launch an iPhone app and website for managing your fitness, encouraging you to eat and live in a more healthy way, and monitoring your personal health information.

“We want a consumer to be able to see the information they care about from a healthcare perspective,” said Aetna’s head of business development, Dan Conroy (pictured above), who gave a sneak peek of the upcoming app at HealthBeat, VentureBeat’s health technology conference here.

It’s a consumer-friendly app with an approachable, simple design, based on Conroy’s short walk-through. When signing on to the app, people have a choice of looking at their data, picking a goal to work towards (like losing a pound or fitting into their favorite jeans), or getting medical care. The third option leads to another app, iTriage, which Aetna acquired in 2012, Conroy said.

Once you’ve picked a goal, the app can help you get there by setting achievable daily goals, like running a certain number of miles or consuming a certain number of calories. It can also show you how much you’ve walked each day (assuming it has step data from one of the compatible devices) and other details.

If you’ve given it access to your medical data, the app will also let you see vital stats like your body measurements, BMI, blood pressure, blood glucose level, and more details, all drawn from your last visit to the doctor’s office. It can also pull in data about your recent office visits and medications, and can even help remind you to take your meds.

There’s also a web version of the app.

Aetna’s challenge is going to be a steep one, given the large number of fitness apps out there. Many of them already integrate with a variety of different data sources — for instance, Runkeeper can also integrate data from Withings scales and Fitbit fitness-trackers; MapMyFitness helps you track your food consumption as well as your exercise; MyFitnessPal has an app library (as does Runkeeper); and all three are extensible through open APIs. And that’s just scratching the surface of the fitness-tracking universe.

Aetna has a couple of huge advantages, however: For instance, it has 38 million customers and made almost $500 million in profits in the most recent fiscal quarter.

The app won’t launch until June, but developers interested in integrating their apps can check out Aetna’s CarePass developer portal.