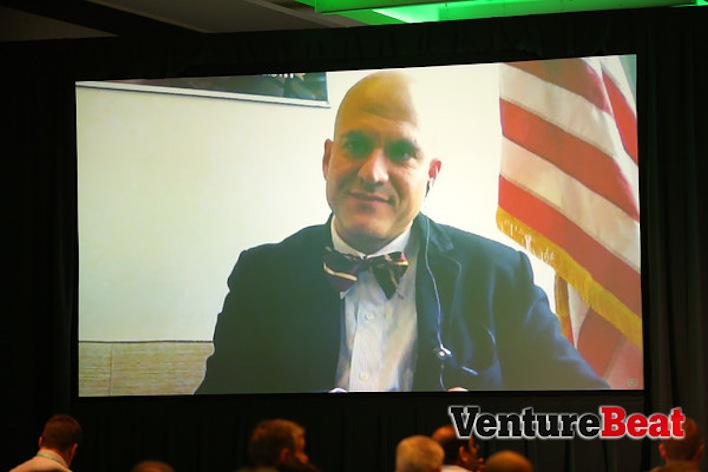 The United States’ national coordinator for health information technology, Farzad Mostashari, believes health tech innovation is only going to grow when there are economic incentives.

“Ultimately it’s going to be the market that drives innovation and not the government,” said Mostashari, speaking via Skype at VentureBeat’s HealthBeat conference in San Francisco, Calif. “There’s a lot of money to be made making healthcare less expensive.”

For Mostashari, who works within the U.S. Department of Health and Human Services’ Office of the National Coordinator (ONC) for Health IT, there are three major areas that need a tech touch, and also provide an opportunity for making major money.

Mostashari believes that making health care cheaper is the biggest opportunity in the market today. The cloud has a big role to play here in terms of using technology to provide preventative care. For example, he said, Iora Health is doing just that by providing healthcare to specific groups of people so that healthcare is targeted. But it is also using the cloud to give wellness information to its patients, also targeted to their needs, in an attempt to keep patients healthier longer, saving them money.

The next opportunity is the digitization of data. This, of course, encompasses electronic health records, as well as other ways of digesting information about your own, or your patients’ health. Electronic health records are there to help with that. Currently, the Obama Administration has increased EHR adoption to 44 percent. That’s more than the 20 years of adoption prior to the administration taking over.

But hospitals, doctors, and nurses are frustrated with these records. They aren’t organized, the hardware in the hospital itself is often outdated and now, instead of light clipboard with straight information, nurses are having to tote around laptops and rolling stations to their patient’s rooms. Entrepreneurs who find a better way of displaying and storing this patient data will have a wide range of customers.

The last opportunity is the democratization of that data. VentureBeat founder Matt Marshall, interviewing Mostashari, shared a story about his time in the hospital with mysterious stomach bleeding. He found himself in the ER twice over the course of a few years, having pints of blood removed from his abdomen, but despite the obvious medical issues, he simply couldn’t find data on his condition. The information wasn’t there.

This is where Mostashari says that customers will need to get involved in their own health care, as well as providers. The customer drives demand. If they become more vocal about wanting access to their electronic health records as well as connections to third party applications that can make sense of that data. Providers who see places where the tech community can fill in gaps need to start making noise as well.