If you haven’t yet had a chance to play with a Leap Motion “touch free” computing device, it’s hard to know what it would be like to control your computer with gestures in the air.

Which is precisely why Leap Motion released this video showcasing its impressive Windows 7 and Windows 8 integration:

With Leap Motion, you can now do everything available in Windows for multitouch functionality — without actually touching anything. The company promises that operating system-level functionality and web browsing capabilities will work out of the box, no software or driver installations required, and will be simple to use.

“We want our users to have a magical experience, with easy and natural movements in the air leading to amazing interactions,” co-founder David Holz said in a statement. “Leap Motion’s mission is to break down the barriers between people and technology.” 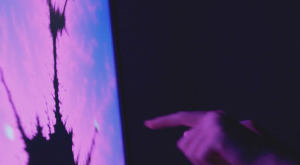 The demo shows a user navigating Windows 8’s home screen tiles via in-air gestures, selecting and rearranging tiles, opening a web browser, and surfing sites while zooming sections for a closer look, all without touching a mouse or a touch-sensitive screen. In addition, previewing one of Leap Motion’s intended uses as a controller in the media room or kitchen, the demo shows how simple it is to scroll through Netflix, select a movie, and begin watching. Or to draw a scene in one of the Leap Motion apps, then rotate it in 3D.

The Leap Motion device is tiny, about the size of a pack of gum. It senses both of your hands and all 10 of your fingers with 200 times the sensitivity of the Xbox 360 Kinect. The company recently announced OEM bundling with select computers from ASUS, and an even more interesting deal with HP that will see the hardware melt away into the computer itself, embedding Leap Motion’s functionality into laptops to make them gesture-enabled right out of the box, without any hardware components to plug in.

And there’s more to come:

“We’re looking to embed our tech into watches, and smartphones, and glasses, and everything,” Leap Motion’s COO Andy Miller told me a couple of weeks ago.

All I want to know is: Where’s the Mac OS X demo?