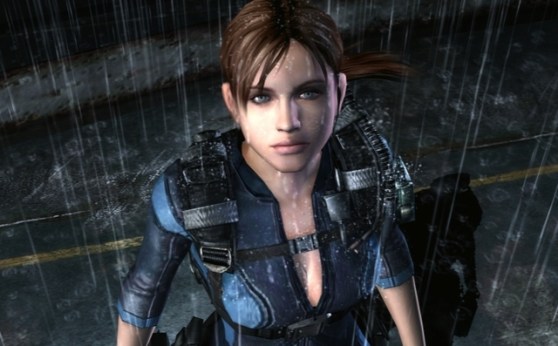 Squishy fish zombies are actually pretty scary when you hear them in surround sound. Surprisingly, I didn’t even realize that they moaned until I started playing Resident Evil: Revelations on PC.

That’s right: The best RE game released in 2012 is now on Xbox 360, PlayStation 3, Wii U, and PC. If you didn’t get a chance to play Revelations on the Nintendo 3DS, it’s the story of Jill Valentine before she disappears in Resident Evil 5, complete with claustrophobic corridors and constant misdirection.

I adored Revelations on the Nintendo 3DS, and I’m pleased more people will be able to experience this story after suffering through less than stellar experiences with Resident Evil 6 and Operation Raccoon City. Revelations takes a step back into Resident Evil’s past by reintroducing slower gameplay and backtracking through labyrinthine “sea mansions” or, you know, cruise ships. It does stumble in the transition from handhelds to bigger screens, but the core experience is so refreshing that it’s easy to overlook messy textures for the sake of a Resident Evil game that’s fun to play.

If you dislike the active inventory in Resident Evil 5 and 6, you’ll likely be surprised by how well a similar system works in Revelations without forcing you to pull up a floating menu in the heat of battle. Whenever you pick up ammo or healing items, they are automatically assigned to their respective weapons or quick-access button. You can only carry a certain amount of ammo at one time, but you never have to worry about managing finite blocks in an inventory page and ask yourself “Do I need bullets more than healing items?”

Really, the developers behind Revelations looked at the action-heavy direction in the mainline series and said “Why not slow it down?” To do this, they added something called the Genesis, a field tool Jill and associates use to scan for hidden clues and identify different forms of the T-virus. That’s just an elaborate backstory for a much-needed design feature: forcing players to examine their surroundings and not charge ahead as they would in Resident Evil 5 or 6.

Along with the Genesis, characters can carry up to three guns, so you can mix it up with a variety of short or long-range weapons. Whenever you want to trade out your arsenal, you can do so from various cache boxes littered through the levels. I missed the old inventory boxes from the original Resident Evil games, so it’s nice to see them coming back in a limited way.

Revelations also takes surprisingly well to controllers. I played the PC version with a wired Xbox 360 controller and needed to tinker with the keyboard layout (and I was still wasn’t satisfied with it). My greatest worry going into this port was how the semianalog mechanics would conform to a modern controller. The process was surprisingly fluid due in part to the 3DS version’s use of the Circle Pad Pro periphrial. 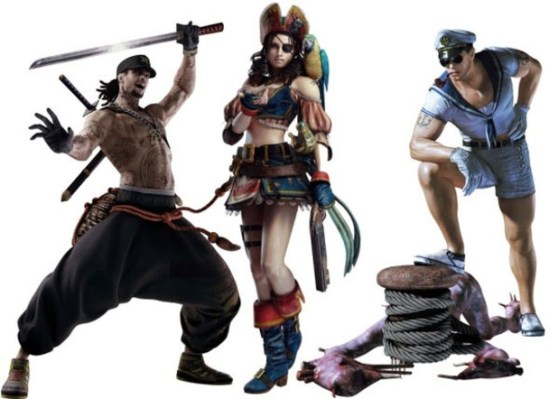 Capcom loves mixing a little bit of humor into its horror games in form of unlockable costumes. In the original Onimusha, you could battle against legions of undead soldiers while wearing a giant panda suit. Nothing else about the experience changed while you did, except that you were very aware that you looked a complete fool in this otherwise serious world.

Resident Evil has a long history with adding extra (and often whimsical) costumes as completion rewards as well, and now Revelations has its own set of ridiculous alternative apparel. A bit of controversy rose up when Capcom revealed “sexy” pirate outfits for Revelations main protagonists Jill Valentine and Chris Redfield that you can unlock after finishing the game. Typically, I wouldn’t say this was a good and worthwhile addition, but I absolutely adore the ridiculous second outfit for Chris.

Rather than his gruff combat gear, Sailor Chris wears a short-sleeved (and a bit too small) naval shirt with white shorts, sunglasses, and burly anchor tattoos. The outfit is as revealing as Jill’s alternative pirate costume and is an amusing solution to giving characters skimpy costumes. Why does the girl always have to wear sexy clothes while men get even cooler combat gear? Finally, Jill isn’t suffering alone and people who would really like to see more of Chris Redfield get what they want.

Keith, a third character you briefly play, probably got the most revealing (and punishing) costume of them all. For most of his storyline, he’ll be running around snowy mountains without a shirt on. The scantily clad male video game character revolution is upon us.

If you’re looking for a more fast-paced experience in Revelations, the Raid feature (which is a holdover from the 3DS original) provides lots of multiplayer action. You rush through various environments from the main game, gunning down enemies for BP (battle points) that you can use to unlock new weapons and customization options.

You can play Raid offline or in matches with your friends. New stages unlock as you complete the game’s main campaign, so Raid is more like a postgame reward after you spend so much time conserving ammunition and running from monsters.

Console and PC players now have the option to play as a female version of the classic Hunk character (who first appeared in a secret playable scenario in Resident Evil 2) and as the deformed version of Revelations side character Rachel Foley. The Hunk costume is particularly ridiculous because she wears all the military garb normal Hunk does up top, but she simply isn’t wearing pants.

See, everyone is equally unprepared to fight zombies infected with a flesh-mutating virus. 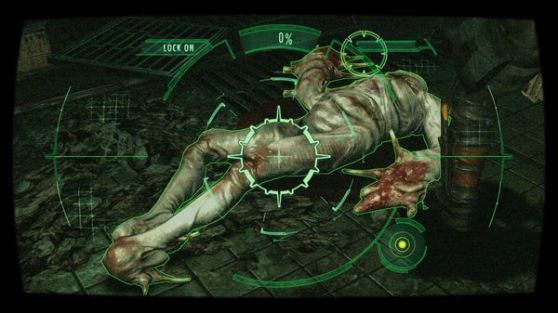 While many horror games tend to go overboard with their jump scares and graphic content, Revelations takes a much more subtle approach. Early on while playing as Jill, you have to track down the communications officer on the Queen Zenobia cruise ship. As you approach the promenade area where a note said he was hiding, you hear the haunting bellows of a strained voice calling “Mayday.” As you get closer, the voice is more distorted and it’s very clear that the comm officer is no longer human.

Long before you ever see the hulking, saw-blade-wielding monstrosity he’s become, you know that getting the key to the emergency communications room is a dangerous task. Even though you know you’re walking into a boss fight, the fear builds when you realize the only way to progress is to confront the horrors lurking in the darkness.

A massive, Gothic dome called Promenade Hall acts as the gateway for various sections of the cruise ships you explore in Revelations. Leaving and entering the hall is something of an ordeal. Each new area branches off from the rest of the ship by two sets of ornate doors guarding an antichamber. Like elevators in Mass Effect, these doors act as a barrier so the game can finish loading a new segment of the map while you leave the last area.

These load times were extremely long on 3DS, and not much has changed in the PC version. The wait is slightly shorter, but it’s strange to think that more advanced hardware can’t readily load new areas of an arguably small environment.

Beyond the obvious door load times, you’ll also find yourself jostled from cutscene to in-game action through various black screens. The simple act of walking across a room can pop up a black loading screen then drop you into a prerendered conversation. These moments are never done elegantly, and only highlight the graphical disparity between video and gameplay. 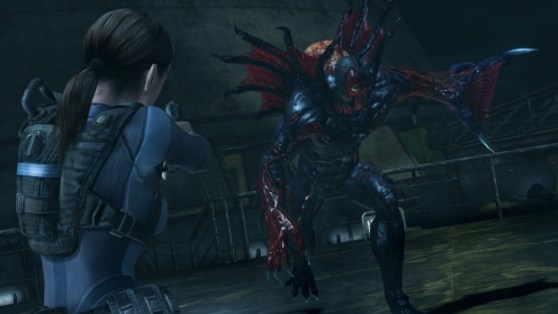 Revelations wouldn’t be a true Resident Evil game if it didn’t fall victim to the occasional camera problem. As you navigate narrow corridors and take on numerous baddies, you’ll likely find yourself attacked from behind or the side before you have any chance to see what hit you.

That’s because the camera hovers just above the players’ shoulder, making the viewing angle very tight. While maneuvering through close quarters, the character model will often fade into the foreground, but the camera remains as the same position.

If you move slowly and deliberately through the environment, the camera will behave, but for the times you’re running from overpowered enemies and in desperate need of healing items, you’re going to end up pinned in a corner or skewered by an enemy lurking just out of view.

I did not go into Revelations with much hope that it would look gloriously high-def on PC, and it certainly isn’t. Anything in the world that isn’t Jill or Chris has an odd, muddy look to it.

This doesn’t detract from the story, but it is a bit disappointing that Capcom didn’t do much to mask the low-resolution look to the ground and water as you explore the game. Outdoor scenes look a little too carved into the environment, like you would expect from a handheld game trying to maximize character clarity with limited resources.

It would have been much more costly for Capcom to entirely remaster the assets in Revelations, but I really wish they had. The 3DS version is by far the most graphically stunning thing I’ve seen on handhelds, but that means it is still a mediocre experience on more capable machines. 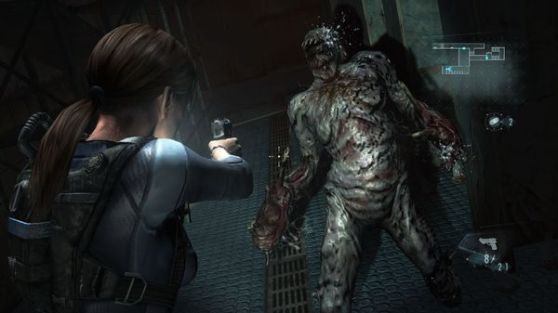 It’s been so long since I could say, without any second guessing or qualifiers, that I like a Resident Evil game. I don’t just like Revelations — I adore it. Slower mechanics, scrounging for items, and marching headlong into the unknown are features not entirely lost in new RE games, but they’re rarely expressed as well as they were in pre-RE4 titles.

Revelations isn’t without problems, but it has an acceptable level of jankiness that’s true to the old RE experience. I expect cameras to dislike corners, and I accept that silly, door-based load times are going to run amok. It’s part of loving a decidedly B-class level of horror storytelling.

What I like most is that now more players than ever can play Revelations and realize that it is where the series needs to go. It has the right blend of action and suspense to carry its story and not frustrate us with unnecessary button prompts. The development team behind Revelations looked at what was happening with the mainline series and decided to turn away from it, and I am so incredibly happy that they did.

Resident Revelations started life as a 3DS game but moved to Xbox 360, PS3, Wii U, and PC May 20. Capcom provided a Steam PC code for this review.