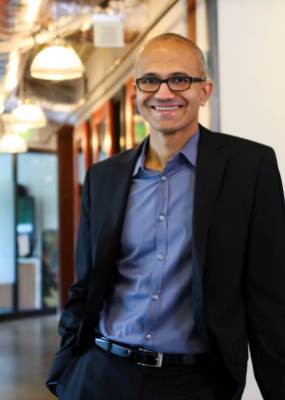 He calls upon entrepreneurs to work hard, innovate, be bold, and take risks. He is fascinated at the prospect of education meeting neuroscience. He thinks you can train your brain to learn more things. He’s an avid reader; he starts more books than he finishes. And, he managed to get a good 3G connection while on a Safari in the jungles of South Africa, this spring.

A man of varied interests, he’s worked and lived many many technologies over the years.

Meet Satya Nadella, president of Microsoft’s server and tools division, a division that builds and runs the company’s computing platforms, developer tools, and cloud services. Nadella leads a team of over 10,000 employees, and his group alone makes $19 billion in annual revenue – which is more than the combined revenues of Facebook, Yahoo, LinkedIn, Zynga, Netflix, and a few others in the Valley.

While you’ll think $19 billion in revenues is huge, Nadella is often found telling his folks, “We’re only doing 19 billion of 2.2 trillion dollars of IT.”

Technology trends have significantly changed from when Nadella joined Microsoft over 20 years ago. He remembers it was all about business process automation and communication driving productivity in the previous generation.

But he says the key trends emerging now are software defined data centers, application platforms, storage, and big data. Ten years down the line, he envisions the most innovative work happening around the conversion of data into meaningful insights and actions.

At Microsoft, he believes in continuously re-inventing, and in the nexus of concept, capability and culture. He mentions how Bill Gates and Steve Ballmer always stress on doing what is relevant.

We caught up with Nadella at TiEcon 2013 to talk strategy, cloud, and more. Here are some excerpts from the interview:

VentureBeat: What are the key initiatives that your division is working on?

Satya Nadella: One of the divisions I run is the infrastructure side of Microsoft, and whenever you run infrastructure the best way to stay grounded is to look at the applications that are being built for the next generation. In our case, historically what has shaped what our division does is our own applications — for example, Exchange, Lync, or SharePoint. Now, in this next era, things like Xbox Live, Bing, Office 365 are defining what we’re doing in infrastructure.

So there are four specific things that we’re working on: One is the modern data center because now you’re managing compute, storage, and network as a unit at data center and multi data center scale. People refer to it as a software driven data center, and to us that’s a key part. Next layer is the data… we need to have a very first class data platform. Then above that, you have to have a very modern application platform for building mobile, social, and data driven applications. Lastly, we want to make all these applications available on any device while giving IT the ability to secure the access and the data. These four things are what we call the “Cloud OS.”

VentureBeat: How do you think cloud is changing the buying decisions of corporate customers?

Nadella: There’s a significant change in the following sense: Cloud makes production of backend computing much more friction free because if you want to spin up a server, you can spin up a server as a developer very easily because of the elastic nature of some of these public clouds. Some of the friction that existed to get going in order to be able to have access has changed. Also, applications built in the cloud for the business decision maker… SaaS applications like Azure and Office 365 are so much easier. In fact, there are a number of customers that are using Office 365 who never bought a server from Microsoft. So this is the first time they are able to take Exchange capabilities because they never installed an Exchange Server, but Exchange as a service makes it that much more palatable for them.

So that transformation that business decision makers and developers are able to rely on applications as infrastructure is a fundamental change. I still believe IT has a significant role because we go from provisioning infrastructure to governing infrastructure, so it’s still very relevant because you can’t have every department, every developer inside a company storing the data in the cloud. You need to have visibility into it, you need to be able to have some amount of compliance controls in it. IT needs to play that role while at the same time end users, business decision makers, and developers have uncontrolled access.

VentureBeat: Talking of “cloud” in Microsoft’s context, how’s the adoption of Windows Azure been? Can you share some numbers and statistics around it?

Nadella: The way I would sort of characterize it is that the Microsoft Cloud is made up of both Office 365 and Windows Azure. First of all, Office 365 relies on Windows Azure for lots of extensibility and core infrastructure.

If you’re an enterprise customer, you’re really choosing a vendor; you’re not choosing a product because some of the most critical data and business processes are inside this cloud. Office 365 is on a billion dollar run rate. Recently, Telephonica, our big customer, moved over to Office 365, which is significant.

With Azure also is has been significant.  Azure AD, which is the directory, has got 2.5 million entities. That means anyone who is a subscriber to Office 365 would also be a tenant in Azure AD. That means any entrepreneur can do a single sign on with those 2.5 million businesses.

We’ve had significant momentum in the last six months – storage and compute capacity has doubled, we’re adding 1,000 customers a day, Windows Azure in its own right has built a lot of momentum, and it’s both compounding at a pretty fast rate.

VentureBeat: How does it compare to Amazon Web Services?

Nadella: I think Amazon has done a good job. Amazon does a lot of business on Windows as well. The key thing for us — where some of our natural strengths are — is this combination of server to Azure and Office 365 to Azure, both of which are pretty unique to us.

If you look at Amazon or Google, the two other providers in the cloud, we have a very unique way to tell a customer that it is not just about building an application in the Azure platform but [also] having a way to take it out or to extend it.

I don’t think distributed computing will somehow get locked up in one data center or even 100 data centers in one company. It is going to remain distributed because of the diversity of needs. SLAs, the laws of physics, and the regulatory environment will demand that applications and infrastructure be spread out more efficiently.

So this hybrid cloud, I would say, is one very unique value proposition, and that matters a lot to enterprise customers. If you’re an Office 365 customer and you’re doing SharePoint and you want to extend SharePoint, that nexus with what we have is again unique; you’re an Xbox game developer and Azure is a unique way to extend. So a bunch of things that we’re doing are different.

VentureBeat: How is mobile and BYOD (Bring Your Own Device) influencing the server business?

Nadella: In a pretty fundamental way. If we look at what used to happen in the enterprise, it used to be that the PC and server [were in the same domain on-site] at the company and that ensured real security and real identity. Now, once you start saying that your data and your applications are accessible on personal devices, then you have to really create that security and compliance.

So, between what we’re doing with Systems Center and Windows NT and Azure AD is consumerization of IT infrastructure. In an enterprise, an IT professional can ensure that they can allow [employees] untethered access to their applications and data on any device at the same policy control because you really don’t want to stop employees from bringing their own devices. While you let employees do that, you still want information assurance because you can’t have the employee walk away with some of the secure data. That ability is now possible with all the work we’ve done in Azure AD.

VentureBeat: What is Microsoft’s future roadmap? And, how do you see your division playing out in the bigger picture?

Nadella: We broadly as a company are moving from a software company to a devices and services company, and that’s really the transformation, both in terms of technology and delivery – as well as business model. What I do, what our division does is very central to this. We’re providing all of the infrastructure for all of the services that are enabled across both the consumer and the enterprise space in the company.