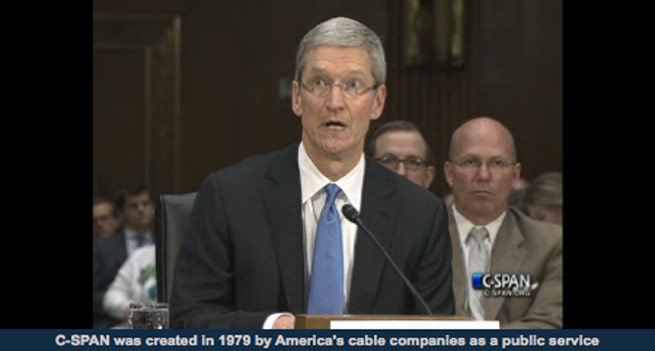 Apple CEO Tim Cook testified before a U.S. Senate Permanent Subcommitte on Investigations this morning about Apple’s offshore business operations — and especially the the $44 billion in offshore income it has not paid U.S taxes on.

And Cook took the offensive, unapologetically calling for tax code reform — and even dolloping out a big dose of Apple religion to the senators.

“To our knowledge Apple is the largest corporate taxpayer in America,” Cook said, saying that Apple’s U.S. tax rate was 30.5 percent. “We paid $6 billion in cash to the U.S. Treasury — that’s $16 million each day. And we expect to pay even more this year.”

Cook also said that Apple was a massive employer and supporter of the U.S. economy, saying that the company was building the world’s largest data center in North Carolina, new data centers in Oregon and Nevada, and a new corporate headquarters in Cupertino, Calif.

“Apple has real operations in real places with Apple employees,” Cook said. “We pay all the taxes we owe, every single dollar. We don’t only comply with the letter of the law, but the spirit of the law. We don’t stash money on some Caribbean island.”

Apple does have significant amounts of cash overseas, Cook acknowledged, but that is due to the fact that the tax code has “not kept up with the digital age,” which Cook said handicapped the U.S. corporation relative to its international competitors.

The Cook dosed the senators with a little Apple religion.

“Apple has always believed in the simple, not the complex,” Cook said. “It is in this spirit that we recommend a dramatic simplification of the tax code.”

“We say this with eyes wide open, knowing that this would likely result in an increase in Apple’s U.S. income taxes,” Cook said. “It would keep America globally competitive.”