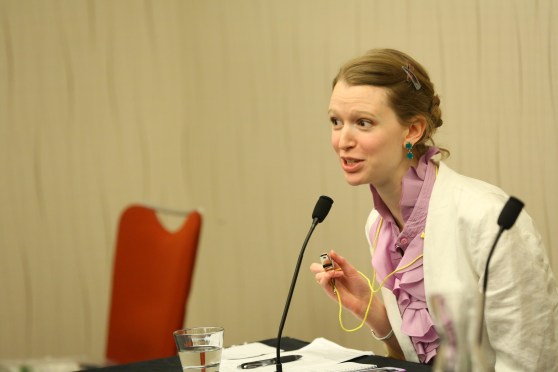 SAN FRANCISCO — Representatives from the AARP and Geisinger Health System make no pretensions: They’re not into technology just because it’s cool.

While the 50-and-over population and doctors appear to be dissimilar markets, selling to either requires a deep understanding of customer needs rather than just a sense of having “the next big thing.”

If you’re a startup targeting either market, you need to wise up.

Here are a couple pointers from the AARP and Geisinger, gleaned from a panel discussion at HealthBeat today.

How can entrepreneurs sell into a health system?

Geisinger Health System serves over 3 million people and is a strong case study in how to deliver effective care. Chanin Wendling leads their eHealth initiatives and gets so many calls each week from entrepreneurs that she says her “head is spinning.”

“Everyone has a cool new idea but no one has tested it,” Wendling says.

For startups that want to work with Geisinger, Wendling first wants to see a solid clinical business case where the technology solves a tangible problem that patients or physicians face.

Once approved, her team will pilot the technology, sometimes three or four different ways, to figure out the right approach to product launch.

The technology must also integrate with their online medical records, and Wendling anticipates that the system will implement a data integration layer to facilitate more seamless deployment of technology in the future.

The 100 million people who comprise the digital health market for 50-and-over is worth about $20 billion. Nice market, if you can get it.

For the aging, adopting products in order to live life on their own terms is more appealing than using technology to assist with medication adherence. For example, the physical fitness market for 50-and-over is projected to reach $1.8 billion over the next five years.

But for now, Holtzmann asserts that the “quantified self” movement doesn’t reasonate with his target population: “You’re a fanatic and wearing a self-tracking device is a way to let everyone know what a fanatic you are,” he says.

Instead, he advocates that startups approach this group in a way that’s engaging, inviting, and, most importantly, fun.