IBM announced a new application for Watson today, called Watson Engagement Advisor, that applies all of Watson’s brainpower to answering questions from regular people rather than, say, doctors or Alex Trebeck. Think of it as Siri, but on a much larger scale. 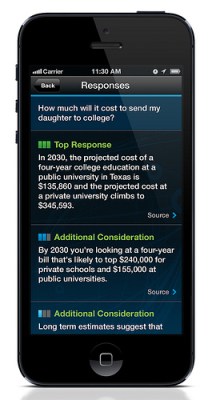 Imagine, for example, that you had a problem with your phone service bill (which I’m sure happens often). Rather than call your carrier and sit on hold for a half hour, you could talk to the company’s custom version of Watson, which could guide you through your bill and answer your questions in a natural, simple way. Watson could completely replace the uneven and inconsistent customer service experience with a single, uniform voice. And which company isn’t going to go crazy over uniform experiences?

In keeping with the nature of machine learning, Watson gets better with time as it learns the unique tastes and preferences of customers on both a macro and micro scale. This obviously makes it really enticing for commerce companies like Amazon, which are always on the hunt for better and more effective ways to sell people more stuff.

So far, IBM says, brands like Nielsen, MetLife, and Royal Bank of Canada are all exploring how to apply Watson’s latest smarts to their businesses.

All of this should make it clear how serious IBM is about the future of its supercomputer. The company says it expects data-analytics business to pull in from $16 billion to $20 billion by 2015, thanks, in no small part, to the endless wonder of Watson.