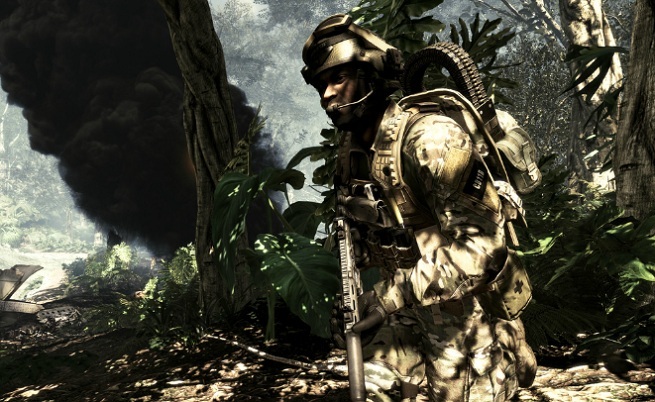 Activision Blizzard unveiled its not-so-secret, long-awaited (at least since November) installment in the fastest-selling video game franchise of all time. Call of Duty: Ghosts will debut this fall on a variety of platforms including Microsoft’s next-generation game console.

Eric Hirshberg, president and CEO of Activision Publishing, describes the game as the “best Call of Duty ever.” He also said that about the last one, and it is genuinely touching to see how he means it. But you can’t make fun of him. So far, he hasn’t been wrong.

The market for these games has lived up to the hype, as the titles typically generate more than $1 billion within a few weeks after launch, every single year. Such sales have made Call of Duty one of the five most valuable game franchises in the industry. And today, the company has taken the wraps off the latest entry in the series at the event where Microsoft unveiled its next-generation Xbox game console. While the game bears a familiar name, Call of Duty: Ghosts is a brand new game world with new characters, new game play mechanics on new consoles, a new game engine, and a new story.

About 40 million gamers are awaiting this title, which is not just a single game but a whole new sub-brand, much like Call of Duty: Modern Warfare and Call of Duty: Blacks Ops. Like those sub-brands, Call of Duty: Ghosts is expected to spawn multiple titles in a new modern combat universe.

As you might expect, Call of Duty: Ghosts represents another huge investment of time and money in a modern combat game. Developed by Infinity Ward, the title suggests that the game is about ghost-like elite soldiers who perform secret and controversial missions, always operating in stealth. The game scenes showed the signature Call of Duty style: intense action, a gripping narrative, pulse-pounding music, and stellar graphics. The company showed a canned demo of the game running on the next-generation Xbox, and the graphics looked superb. 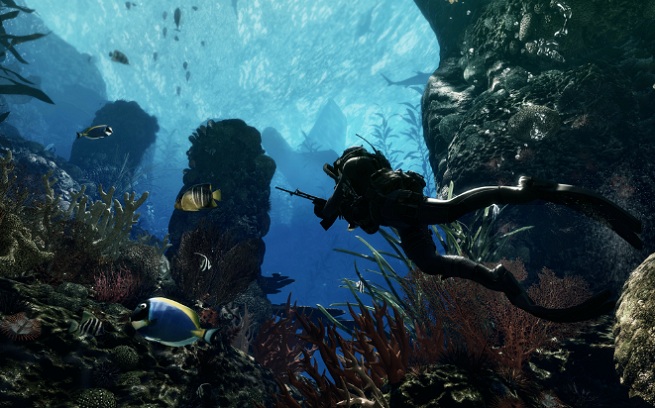 Activision didn’t show hands-on gameplay to journalists at its event last week, but it said that the animations on screen were running real-time, in the game engine itself as it operated on next-generation consoles.

One of the highlights of the demo showed the Ghosts in scuba gear, diving under the sea to escape detection. They swam through a beautiful undersea environment with cool lighting effects, wave distortions, and many things moving at the same time. Only the most powerful game machines are capable of running such scenes, and clearly Microsoft has one of them. The action got particularly hot when a firefight broke out under water between divers who had guns that worked underwater (that seems to defy the laws of physics). The visuals were indeed so good that there is no way a current-generation Xbox 360 or PlayStation 3 could run them.

At an event last week, Hirshberg said, “From time to time, I have read stories about how long Call of Duty can last. They are about whether this franchise is ever going to crest. And I know that it seems that it should be. There is just one problem. It’s not. By every measurement you care to look at, Call of Duty has never been stronger. It’s not only thriving. It’s still growing. Sales of the game, sales of downloadable content, the number of people who play every month, the number of daily users, the number of hours played, the engagement with social media, the video views — just about any measurement you care to look at, this is still a franchise that is on the rise. After all this time, that’s pretty remarkable.”

He added, “Keeping Call of Duty relevant, growing, thriving, and still surprising people — this long into its history — is not easy. In fact, it may be the hardest creative assignment of them all. With a franchise like Call of Duty, we have the dual responsibility to our fans to continue to make and refine the game that everyone fell in love with in the first place, and still find ways to continually come up with new, meaningful innovations each and every time. You can count on one hand the pop cultural franchises that have had this kind of staying power.”

“We chose to push this thing forward and use the opportunity of the next-generation consoles to user in the next generation of Call of Duty,” Hirshberg said. 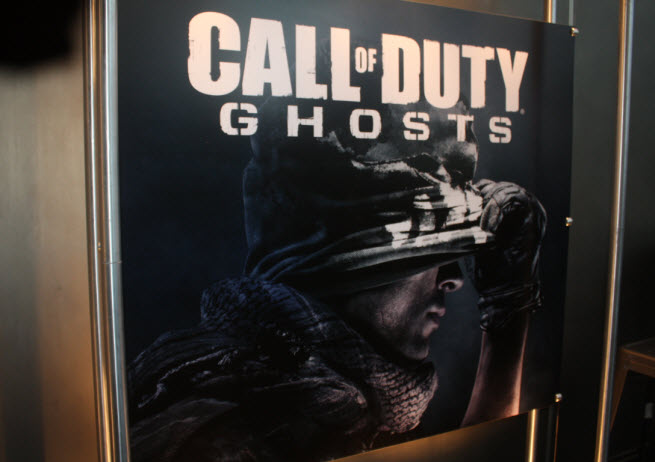 A preview of the brand new story

Mark Rubin, executive producer of the game at Infinity Ward, said at the event last week that the ambition for the game is to make it run at a smooth 60 frames per second (Movies typically run at 24 frames per second) and still wow gamers with its complex visual animations.

“We’re really excited that we get to be the studio that brings Call of Duty into the next generation,” Rubin said. “This is powered by an amazing next-gen engine that gives us amazing graphics fidelity.”

Infinity Ward hired Stephen Gaghan, the screenwriter for the Oscar-winning Traffic film, to create more fleshed out, emotion-driven characters. Gaghan directed Syriana and he’s a gamer. The bet is that Gaghan’s fleshed-out characters will make full use of the enhanced graphics technology in the new game consoles for rendering human faces.

“What they really wanted in this game, Call of Duty: Ghosts, was emotional reality,” Gaghan said.

The story opens with a catastrophic event that cripples America’s military power and virtually wipes out the southern half of the country. The U.S. is no longer a superpower. The story follows two brothers as they meet up with the resistance.

“As the player, you are actually the underdog, fighting back against these superior forces,” Rubin said. “The team you are part of is formed from the remnants of the U.S. Special Forces. They’ve adopted every technique for modern, guerrilla-style missions.”

In the underwater scene, nothing really looked fake. Bubbles floated upward through the water. Shadows were cast by objects on the surface down into the water below. The music suggests the intensity as the Ghosts try to escape detection via sonar pings. Once the soldiers make contact, they fire at each other using underwater guns. Then the Ghosts fire a handheld torpedo at a giant submarine passing overhead.

Daniel Suarez, vice president of production at Activision Publishing, said that one unique feature of the game will be its reliance on squad combat, with smart artificial intelligence characters carrying their weight in different roles on the battlefield.[youtube=http://youtu.be/Zxnx3W-HA18] 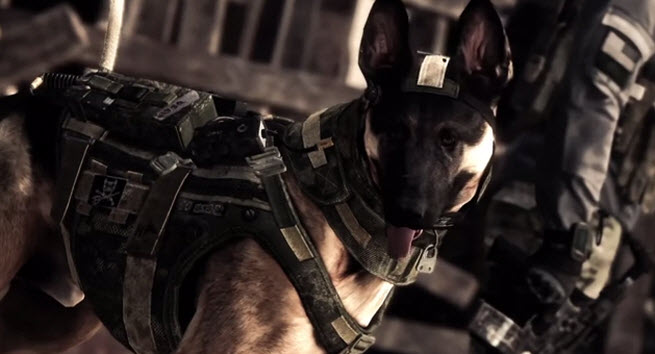 A soldier and his dog

Among the new smart AI characters in the game is a dog. That’s right.

“This is someone you care about,” said Rubin. “This is a squad member. You fight for him and he fights for you. He does everything from sniffing out explosive to protecting the team.”

The dog animations were created from scans of a real Navy Seal Team combat dog. The team took advantage of next-gen hardware to create characters with detailed faces and the fur on the dog, said Jake Rowell, lead artist at Infinity Ward.

“The closer you get to it, the more it maintains the curvature” of details such as faces, Rowell said.

Faces will look more lifelike, thanks to the horsepower of the next-generation consoles. Helmets look round, with no jagged edges, even when you see them up close. You’ll see better-looking smoke, fluid dynamics, and interactive dynamics. The non-player beings are smarter. Fish move out of the way when you get close to them.

“It should feel like you are really there,” Rowell said.

Players will be able to customize their characters more than ever, choosing faces, heads, body types and more. The notion is to make players connect with who they are as characters. The new consoles have a technique, Sub D (developed by Pixar for animated movies), that pushes up the number of polygons (the basic building blocks of 3D images) in real-time. High-resolution textures enable much better details. When a beam of light hits a character’s skin, the mathematical models behind the animation cause the light to bounce around under the surface and produce a faint glow to the texture of the skin. On the fly, the engine decides how many polygons should be included in a given animated image so that it looks better. That makes images more realistic.

The character’s arms, one of the few body parts you see a lot in a first-person shooter game, will be far more realistic than in past games with an “exponentially higher polygon count.” The arm animations will show cuts, bruises, and even the dirt underneath fingernails. The weapons will also look a lot more detailed. Jungles in Ghosts will be far more detailed and populated with plants than in Call of Duty: Modern Warfare 3, which came out in 2011.

The multiplayer combat will also be more dynamic. There are events such as earthquakes and floods that will affect the battlefield. There are player-driven actions such as doors with explosives and other player-created traps. And the developers promise that those changes won’t slow down the game. Suarez said that the multiplayer animation quality has typically lagged behind single-player versions in first-person shooters. But Activision is aiming to reproduce the same graphics fidelity in multiplayer as it does in single-player mode.

“Gameplay drives tech,” Rubin said. “All of this was built to enhance gameplay for the player.” 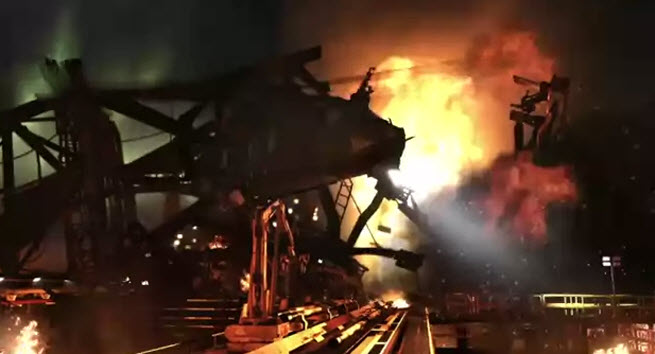 What this means for Activision

The game arrives Nov. 5 on a variety of platforms. For Activision, the new game is emblematic of its strategy of focusing on a few titles and doing them exceptionally well. With games like Skylanders, Call of Duty, and the upcoming Destiny game from Bungie, Activision can truly say that it puts its “capital into make those things awesome,” Hirshberg said.

The company is investing heavily in marketing as well, since it knows it will face brand-new game franchises appearing for the first time on the new game systems. If the company pulls off its marketing and game design just right, it could keep the Call of Duty juggernaut going. And if it doesn’t, there’s going to be a pretty big crater in the ground.