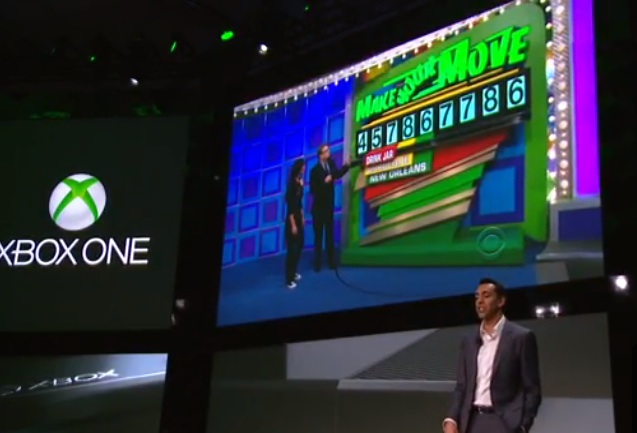 Microsoft just blew the doors off of every integrated television experience with the reveal of its next generation Xbox One video game console.

The new Xbox will bring improved voice and gesture controls to watching TV. It also brings in live TV from the Xbox One (something you could do a bit clunkily on the Xbox 360 with Verizon FiOS and Xfinity TV from Comcast), Skype Internet calling, a new Trending feature that shows what’s popular among all Xbox Live community members and multitasking while watching programs.

Seriously, if the demonstration is any indication for how it’ll actually work, you’ll never watch TV the same way again.

Microsoft entertainment VP Yusuf Mehdi showed off how you’ll be able to turn on all the devices in your living room by speaking “Xbox On,” which pulls up your Xbox Live profile without the need to click through several sign-in screens or software updates. Apparently, the console will recognize your voice to do this, and it could possibly even distinguish between others that might use the console.

From there, Mehdi proceeded to change the channel by speaking. For example, you change from watching ESPN to Syfy by simply saying “Watch Syfy.” That’s right — no more “flipping” through the channels when you know exactly where you want to go. Mehdi didn’t make this clear, but I think this means those with a cable subscription (to Comcast at least, which was what they used in the demo) will no longer need to rent one of those crappy cable boxes that was probably made a decade ago.

As for the gesture controls, they seem to be utilized when switching between functions, like Live TV or another app. And speaking of other apps, the new controls make me think that multitasking on a television screen isn’t just an unnecessary pain in the ass. The demo showed off the ability to pull up sports stats during live games, chat rooms with friends, and pulling in a Skype voice call while you’re watching something.

For more coverage, check out our complete coverage and our liveblog and livestream.