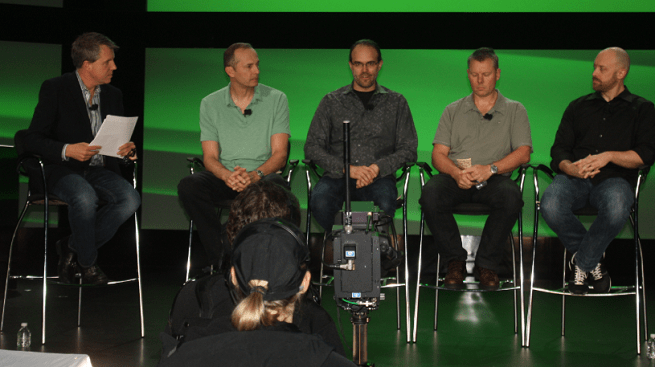 Microsoft’s team of super-hardware geeks talked about what is inside the new Xbox One console.

Gamers may not care about the hardware so long as it runs games smoothly and doesn’t get in their way. But the Xbox One is an engineering marvel that combines both cloud processing and a heavily engineered game console to produce game effects that Microsoft promises will be truly impressive.

If you look at all of the tasks that the machine does, it’s clear there isn’t enough silicon in the box, said Nick Baker, a distinguished engineer of console architecture and one of the head silicon engineers at Microsoft. He was a key architect on the Xbox 360 chips as well as the Xbox One chips. But the cool thing about the box — which has chips with 5 billion transistors in them — is that it can tap supercomputers in web-connected data centers to do processing.

That means the hardware inside the box isn’t fixed. Over time, the hardware can get better as Microsoft upgrades the technology in the data centers. For now, Microsoft has more than 300,000 servers in its data centers to support Xbox One and the Xbox Live online entertainment service. The Microsoft supergeeks spoke on a panel at the Xbox Reveal in a session moderated by Xbox Live evangelist Larry “Major Nelson” Hryb.

That processing power enables things like instantaneous Kinect, where voice commands immediately activate tasks on the Xbox, from waking up the machine instantly to changing the channel on your TV. That kind of processing exists alongside other things going on at the same time. You can, for instance, watch TV and then receive a Skype call without turning off the TV show. To do this type of thing, Microsoft had to design the box in a way that it could access memory and caches of data much faster than in past game consoles.

“There are a growing number of transistors in the cloud that you can move the loads onto,” said Boyd Multerer, the partner director of development and ISS Console Development Management (one of the software experts at Microsoft). “I think it’s an inflection point. So over time, your box gets more powerful. We move loads into the cloud to free up resources on the box.”

Todd Holmdahl, the corporate vice president of IEB hardware and another longtime Microsoft hardware executive, said the load can shift from one device to another. The cloud can tackle tasks in games like physics, artificial intelligence, and even some rendering. The tasks that require low latency, with split second interaction between one chip or one device and another, are those that the box — not the cloud — still needs to handle.

“This is a radically different way of thinking about a game console,” he said.

After the talk, Multerer told me that some tasks don’t need to run all the time. Artificial intelligence, for instance, doesn’t need to be calculated for every single frame of the game. Your enemy in a game will close in on you, but it only needs to know where you are every second, rather than every split second. So that task can be offloaded to the slower connection to the servers.

But anything that happens on the screen in an instant — if you pull the trigger on a gun and you see a muzzle flash on the screen — has to be calculated inside the box, Multerer said. Some rendering, like trees in the distance in a scene, can also be offloaded, so long as the software properly divides up the tasks, he said. That kind of thinking is very different for a game machine, but Multerer thinks many consumer products will be designed like this in the future.

The machine has things like Gigabit Ethernet so that it can be ready for improvements in Internet speeds. It has multiple power states so it can reduce power consumption when necessary. The box has a couple of 802.11n radios to connect to the Internet wirelessly and with other devices in the room.

“You can use just enough power for the experience you are in and nothing more,” he said. “The best example of that is wake-on voice, where you say ‘Xbox On’ and it powers up immediately.”

Holmdahl said that Microsoft redesigned the Kinect system. The sensors are now smart enough to detect your facial expressions, which provides for smarter games that know how you are feeling as you play the game. Kinect has a variety of sensors it can rely on, like time-of-flight depth cameras and infrared, which is good at detecting low-light movements.

Baker said that the internal Microsoft chip team had to design five pieces of silicon to handle all of the tasks in the console and the Kinect subsystem, which now comes bundled with the box. The team had to test the chips thoroughly, running 10 trillion cycles of simulation in order to make sure everything worked right. The chips had to be designed to work with each other in a coherent way.

The GPU is multitasking so that it can run compute and cloud tasks at the same time that it renders graphics, Baker said. The net result is that it can do billions of calculations per second.

Holmdahl said, “We started with a blank slate. We talked to the hardware, software people. One of the good things about Microsoft is you have those people under the same roof.”

Holmdahl said developers will be able to exploit these technologies as they learn more about things like instantaneous voice command integration into the game console.

The work started a few years ago.

“The development of these things takes a while,” Holmdahl said. “You develop some things that don’t work. We have converged on something that people will love.”

Multerer said the machine has 8GBs of RAM because it needed to have fast-switching between apps and support two things running at the same time, such as the Kinect entertainment controls and the games.

The new generation of graphics chips is based on supercomputing technologies and having the right data flow, with the focus on having the data in the right places at the right time. So there had to be caches of memory on the die, on the CPU, to feed that data to the processor, Multerer said.

Baker said that things like Hyper V, virtualization, and 64-bit processors really started in a data center. Getting them into a living room device wasn’t easy.

“This is really a first,” Baker said.

“And it’s hard to do,” Multerer said. “David Cutler came under our team a year and a half ago and he worked on the operating system himself.”

The machine’s software takes lessons from the services world. The team started with virtual machine technology and it stripped out general-purpose functions out. It boiled it down to the bare minimum so that the virtual machine — a middle software layer — can run extremely fast and won’t slow down games. This kind of software can be partitioned into different parts so it can handle different tasks simultaneously. One of the machine’s operating systems boots up and is “created” when the machine turns on, Multerer said. Then it stays operating while the machine is on, and then disappears when the machine is turned off.

“When you can do two things at one time, it solves a lot of problems,” like figuring out when your friends are online and they are trying to get in touch with you, Multerer said.

There’s a third operating system as well that handles other kinds of services, such as the TV services. Switching between these operating systems quickly gives the system its instantaneous feel, Multerer said.

With Xbox Live, the number of servers supporting the system in the cloud is huge. Those servers can be swapped out. When the hardware becomes more powerful over time, developers can build bigger game worlds and put more action on the screen at once, Multerer said.

Dan Greenawalt, one of the game development experts at Microsoft and creative director at Turn 10 Studios (the folks behind the Forza Motorsport auto-racing franchise), said that Microsoft brought together teams from Microsoft Research and other teams.

“This is the next giant leap forward,” he said.