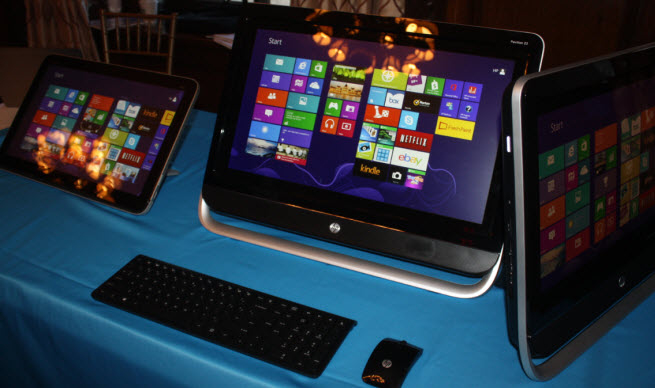 Hewlett-Packard is unveiling a small army of computers today that will use Intel’s next-generation microprocessors, code-named Haswell, for better processing without an increase in power consumption. The new products are HP’s latest bid to get its mojo back and to embrace the change wrought by tablets on the struggling PC industry. 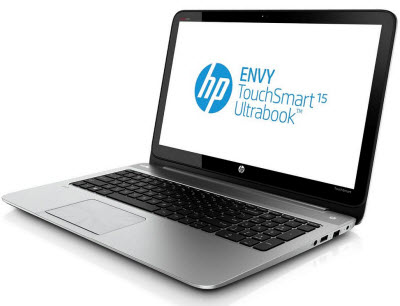 Some of the devices are already shipping, but many are still waiting on Intel’s official release of the Haswell processors, which are due in early June. The Haswell processors are built in a 22-nanometer manufacturing process that enables both faster processor speeds and low power consumption, mainly by combining graphics and processor functions on a single chip. Haswell promises twice the graphics performance of last year’s Ivy Bridge processors.

Intel introduces major processors about once a year or so, and HP is using the occasion to launch a wholesale redesign of its computers. It is launching a new lineup of laptops, all-in-one computers, and desktops. All of the devices are thinner, stronger, and sleeker in design.

Among the new offerings are a bunch of thinner, lighter, and faster touchscreen laptop computers. They include the HP Envy TouchSmart 14 Ultrabook, with a 3,200-by-1,800 full high-definition touchscreen display, better battery life, Intel’s Haswell, and a 10-point multitouch screen. That model will ship on June 26 for $700. Such low prices mean that Intel-based Ultrabooks will finally reach a sweet spot of good battery life, good performance, and lower prices. The HP Envy TouchSmart 15 notebook (pictured right) also has a full touchscreen with Beats Audio. it will be available on June 5 for $530.

The HP Envy 17 notebook computer will come with a 17.3-inch screen, an Intel processor and Nvidia graphics. It has 2TBs of hard disk space, Beats audio, and a full-HD display. It will start selling on June 5 at $700.

HP is also launching new versions of its mainstream consumer Pavilion-branded computers. The HP Pavilion TouchSmart notebook is a thin laptop with a capacitive touchscreen and 10-finger gesture support. It will sell for $400 starting on June 26. The HP Pavilion 15 notebook will have a 15.6-inch display, a 1-terabyte hard drive, and an optical drive, and it will come in a variety of colors. It will sell on June 5 starting at $430. 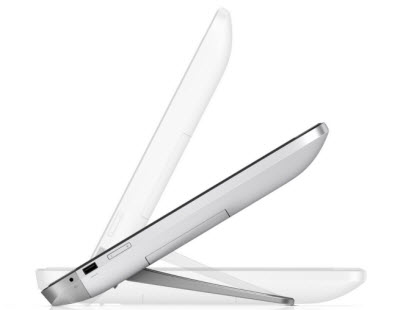 As for desktops, HP is introducing a cool new all-in-one PC dubbed the HP Envy Rove 20. The device has a 20-inch touchscreen that you can fix at a variety of angles. You can also lay the device flat.

The device also comes with a built-in battery that can last for three hours while unplugged. In other words, it’s a giant touchscreen tablet running Windows 8. The machine uses Intel integrated graphics and Haswell processors. It has an in-plane switching (IPS) panel with wide viewing angles and 10-finger multitouch. It has Beats Audio and comes installed with software including EA Monopoly, Fingertapps Jigsaw Wars Puzzle, Fingertapps Musical Instruments, and Disney Fairies. It will debut in July for an undisclosed price.

HP is also launching the HP Pavilion TouchSmart 20 and 23 all-in-one PC models. These feature five-point optical touchscreens, widescreen displays, and new processors from both Intel and Advanced Micro Devices. The hard drives have up to 2TBs of storage. The machines have HP TrueVision WebCams and 25GBs of free Box cloud storage for U.S. users. The 20-inch model will sell for $620 starting June 23, and the 23-inch model will sell for $750 on June 5.

The HP Pavilion 500 Desktop PC will have Haswell with a choice of discrete graphics from Nvidia or AMD. It will start selling on June 5 for $490. The HP Pavilion Slimline 400 Desktop PC will come with Haswell processors and Nvidia discrete graphics chips. It will start selling on June 30 exclusively at Best Buy starting at $400. And HP is launching the HP 110 Desktop PC. This low-cost machine has Intel processors or AMD processors, up to two terabytes of hard disk storage, and a 6-in-1 media card reader. It will be available on June 5 starting at $290.

HP is also extending the Envy brand name to its printers. The new products include the HP Envy 4500 e-All-in-One and the HP Envy 5530 e-All-in-One printers. Those printers are able to print from both mobile devices and web pages. They’re packaged in compact enclosures and offer Instant Ink subscriptions, which make it easy for a home user to get ink refills. Pricing for the printers will be announced later this summer.

Last week, HP unveiled a couple of new consumer notebook computers. Those included the HP Split x2, a laptop that can be used as a clamshell device or converted into a tablet by detaching the keyboard. Such 2-in-1 designs are an example of wider innovation in the PC industry and an attempt to change with the times. The HP Split x2 has a 13.3-inch touchscreen and two batteries. The Split x2 will sell for $800. HP also unveiled its HP SlateBook x2, an Android tablet that can be used either as a tablet or a laptop. It features an Nvidia Tegra 4 mobile processor and a 10.1-inch diagonal screen. The HP SlateBook x2 will sell for $480.