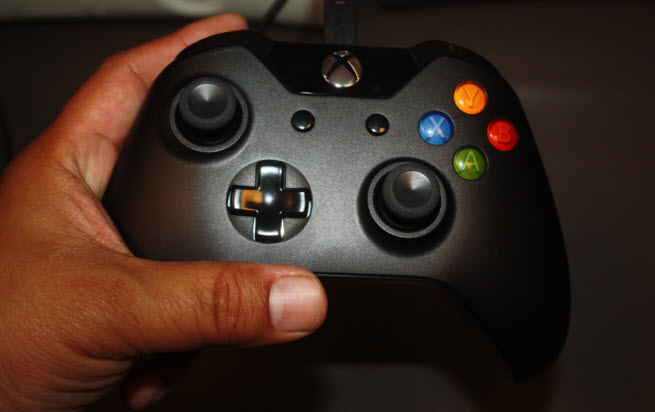 Game controllers are a critical accessory that can make or break a system, particularly for hardcore gamers, who develop passionate feelings about the devices that they hold for hours at a time. If there are problems with the controller, it could cascade into a general dislike for the console, which is anticipated to be a multibillion-dollar platform. Fortunately for Microsoft, the feedback yesterday from people who held the controller is positive. It isn’t dramatically different from the current Xbox 360 game controller, and that’s a good thing.

Those with long memories will remember what an embarrassment Microsoft faced when its first game controller for the original Xbox in 2001 was too large, partly because it required two slots for bulky flash storage cards. Anyone with small hands couldn’t even wield the bulky thing well. Microsoft quickly redesigned the controller to be smaller. Since that time, the company has learned a thing or two about industrial design.

With the Xbox 360, Microsoft created a widely acclaimed console controller with the help of outside industrial design companies such as Astro Gaming in San Francisco. But this time, Microsoft was able to do a lot more of the process inside its own walls, said Carl Ledbetter, the senior principal creative director and a leader of the Xbox One industrial design. During our tour, Ledbetter said the team in one building could create a design and walk it over to the Model Shop in another, where Vince Jesus, the lab director, could print out a 3D prototype. That enabled Microsoft to preserve secrecy on the whole project more easily.

“We could bring people in-house and watch them play games in Studio B,” Ledbetter said. “We watched them, with their permission. We videotaped them.” 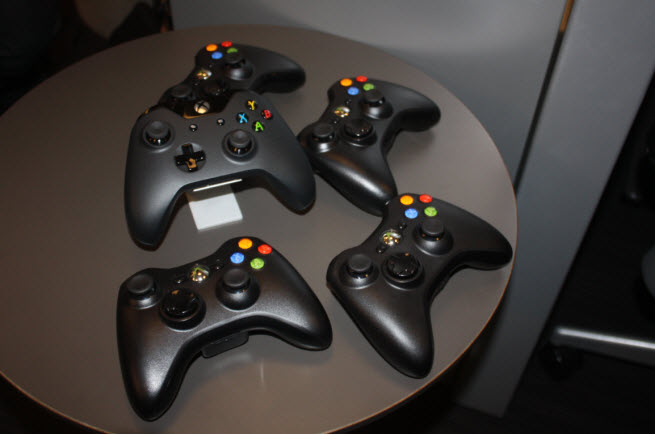 One of the big changes is a new magnetic trigger that feels different when you pull it. The haptic triggers give you immediate touch feedback. The device also has much more accurate and nuanced force feedback. Older controllers would simply shake when you were shooting a gun or during an intense part of a game. But the force feedback on this sends you different signals depending on what is happening. If you are driving a car, you can feel the bump of the wheels on the road, and you get a different sensation when you hit the brakes.

You can also get precise feedback that feels like a beating heart. Together with the fact that the new Kinect can actually detect your heartbeat, this feature could make for some very interesting effects in future games. The device can simulate a different kind of feedback when you fire a gun. You can feel the rumble of helicopter rotors in another demo.

The device does not have a touchpad or “share button” like Sony’s does with its new PlayStation 4 controller. But Microsoft’s device includes an infrared LED on the front of controller to enable seamless player pairing and identification. Using Kinect, Microsoft can clearly identify a person who is using a controller. The results — players easily jump in and out of games.

“People were sensitive to the holes, but we took close-up photos in tests and could tell,” Ledbetter said. “These are things that make it a better product. We wanted it to be more comfortable and we wanted a wider range of hand sizes that could fit it.”

The new controller weighs almost the same as the current Xbox 360 controller. But it feels different because its center of gravity has changed. The battery pack used to be perpindicular to the controller’s front, and it jutted down from the bottom of the controller. Now it has been turned sideways and it is embedded in the body. That was enough to shift that center of gravity so that it feels different in your hands. The AA battery case is still removable. The new controller feels lighter. 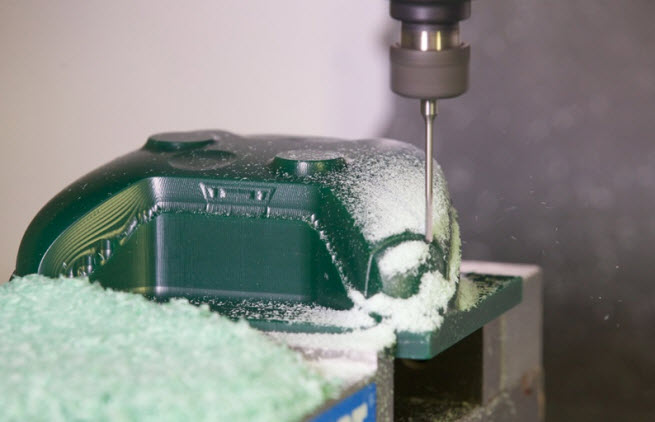 Ledbetter said that his team was able to rapidly iterate on the design working in the Model Shop. They created more than 200 different controller designs using the prototyping machines.  The lab has three 3D printers to churn out the prototypes. Jesus can get a design printed overnight and send them over to the designers for evaluation quickly. Jesus was delivering six of those a day in time for morning reviews.

“We had four or five directions we were interested in and tested them,” Ledbetter said. “We printed them and assembled them. We put them together and then evaluated performance.”

Navin Kumar, a senior product manager at Microsoft, said in a demo of the Xbox One Wireless controller that there were more than 40 enhancements to the Xbox 360 controller for the new generation. Those changes are designed to “maximize gaming realism.” The aim is to keep you immersed in the action longer. The device includes “impulse triggers,” better thumbsticks, and a redesigned D-pad. The latter was a sore point for gamers because it was easy to mistakenly hit the wrong part of the pad while playing a game. The device is also designed for more precision and control. 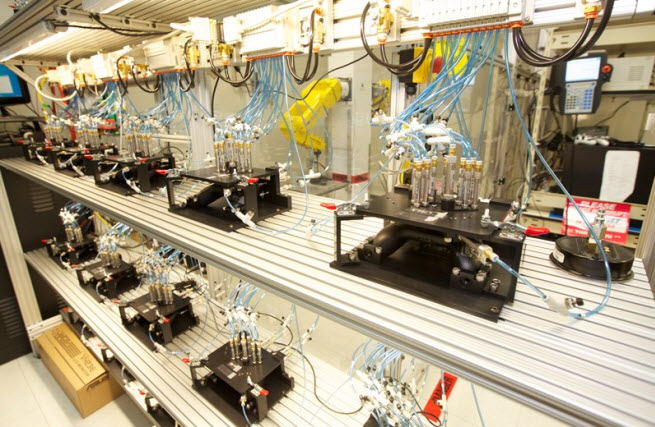 Bob Brown, the director of test for the controllers and other accessories, said that each controller has its buttons tested more than 2 million times over the course of two days. You can see that simulated above by the machine that actually push the buttons. This testing approximates a lifetime of seven to 10 years. That enables Brown to predict the lifetime of the controller and its failure rates. He will continue to test the controller failure rates even after the console ships so that the quality team can monitor consistency of production.

“We do everything here from cradle to grave,” said Brown, who once tested the parts on F-16 fighter jets. “We have software developers in here. We generate our own tools because you can’t find off-the-shelf tools to test controllers.” There are wireless experts, mechanical engineers, and other experts.

Early on, the team had to change the D-pad to get around a reliability problem. But the overall design has turned out to be sound, Brown said.

When a device fails, Brown hands it over to a failure analysis team to figure out what went wrong. The camera images come in useful for that analysis. Brown can change the pattern of tests via a computer dashboard. Brown also has a machine [below] that simulates shaking. And he showed off a slow-motion video that captures what happens to a controller when it is dropped on the ground. The video has a breakaway plastic part that pops off during the fall, allowing the team to see what happens inside when it falls.

Now with all of the talk of reliability, it’s hard to avoid the issue of the Red Rings of Death, the error message that resulted when the Xbox 360 failed, mostly due to overheating problems, in the last generation.  Microsoft fixed that problem with a chip redesign that went into effect during mid-cycle, but prior to that, large percentages of its consoles failed, and Microsoft had to take an embarrassing $1.1 billion write-off to replace broken machines.

Brown said he tested the controller with consoles all of the time. Asked about what Microsoft would do to avoid the Red Ring of Death problem from the Xbox 360, Brown said that console testing wasn’t his department. I’m sure that Microsoft will say it has that figured out, but it wasn’t part of its messaging on Tuesday. 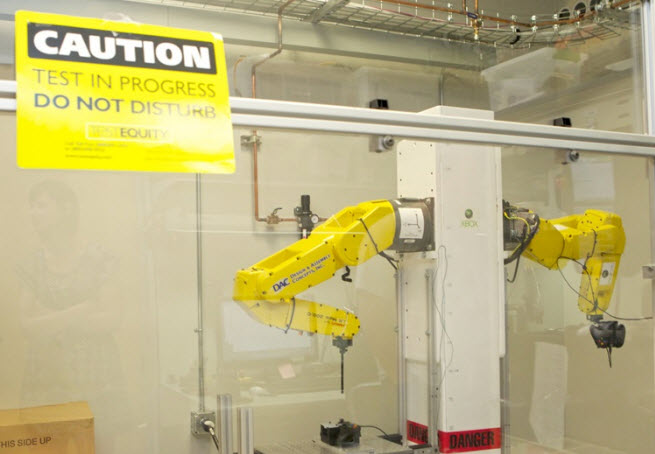