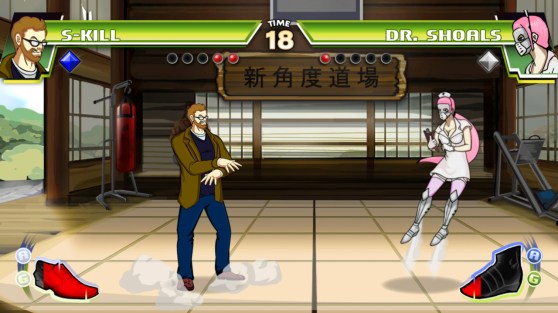 I currently have a 1-0 win record against one of the biggest names in the fighting-game community.

Seth Killian is a lead game designer at Sony Santa Monica Studio by day, but the developers at Iron Galaxy Studios recently put his likeness into their own game, the upcoming two-button parody fighter Divekick. Why? Because Killian used to be a special advisor on the Street Fighter series, a prominent play-by-play announcer in the EVO fighting-game tournament series, and a renowned competitive player himself. Yeah, he’s sort of a big deal in this world.

Killian was at a recent press event in Santa Monica, Calif. to help promote his new character in Divekick, S-Kill. He issued a friendly challenge to me. As a fighting-game novice, I was reluctant to engage in fisticuffs (or kickicuffs, rather) against a guy who certainly knows how to throw down. Why would I subject myself to a public ass-whooping? But I figured that saying yes and losing would be more honorable than declining the offer.

In Divekick, you get two buttons: One for jumping and another for divekicking in a forward direction. That’s it. No moving back and forth, no joystick or directional pad. Just the two buttons. The funny thing is, I could not seem to remember which was which, and that worked out to my advantage. I ended up zigging when I intended to zag. Killian likely expected me to move the way I wanted to, but in an almost drunken master style, I ended up in the perfect striking range several times and was able to land some solid kicks (and each attack does an absurd amount of damage, resulting in one-hit knockouts).

As I took the lead in our race to take five rounds, Killian reassured me several times that he wasn’t intentionally letting me win. I wasn’t intentionally winning, for that matter, but that’s besides the point. I wanted to play more cautiously against such a formidable opponent, but mistakenly pressing the two buttons in the opposite order made me the aggressor. 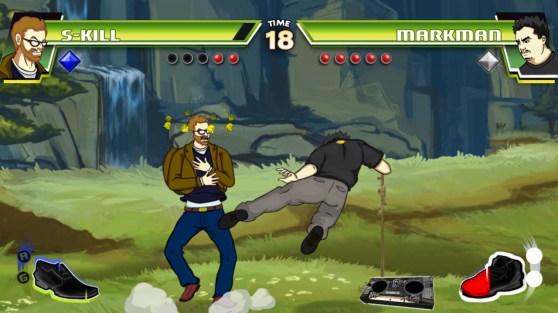 By the time the score was tied at 3-3, Killian misjudged one of his attacks (resulting in a 4-3 advantage for me), leaving S-Kill dizzy at the beginning of the next round. I then somehow managed to unleash a special move that I had built up and took the match.

Was my win beginner’s luck? Absolutely. I think my success also plays into the whole gag of Divekick, where the move the game takes its name from is cheap and is something less-skilled players can abuse.

I have nothing but love and respect for Killian and what he has done for the competitive fighting-game community and now as a game designer. Nevertheless, I beat him — and he was playing as himself. This makes my record in all fighting games against Killian 1-0.

I would now like to take this time to announce my retirement.

Divekick will be available for download on the PlayStation Network (for PS3 and Vita) and PC sometime this summer.