Last week VentureBeat ran an article on the nationwide unveiling of Collegefeed’s early career marketplace. The company aims to help college students present themselves professionally online, explore career options, and connect with employers. In order to test how well they accomplish these goals, I recruited a current college senior to help me out.

Max is a mechanical engineering student at Santa Clara University. This June he’ll be graduating and is currently searching for a job in Silicon Valley. I asked him to test Collegefeed’s services to see how useful he found it and what his general thoughts on the site were as someone who is the company’s target market.

When registering for the site, new users are promised “3 steps, 1 minute, and Collegefeed will be personalized just for you.” Max listed the top three companies he would like to work for, then he listed three areas of interest, and finally he filled out basic information on himself, though he was able to pull most of this automatically off of LinkedIn through the site. He said he found the registration straightforward and very easy. 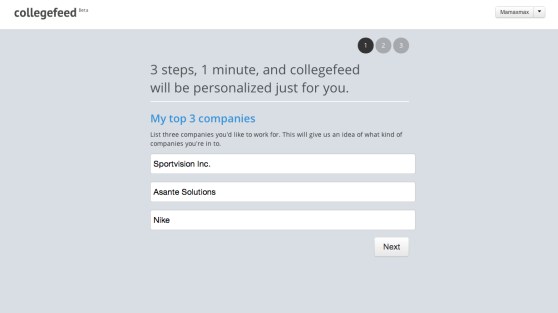 After completing his registration, he worked on filling out his profile. Here he felt that some of the information asked of him was a little specific or odd. For example, the site asks for users to upload work samples. Not sure what to include and hesitant to go searching through old binders and folders, he opted just to skip this step.

As part of filling out his profile, he was asked to create a personal statement, something which he equated to the first question in a real job interview. He thought it would be a good way for employers to quickly get an idea about him. Overall, he thought his profile was a simple but effective way of conveying information about himself and what he values. 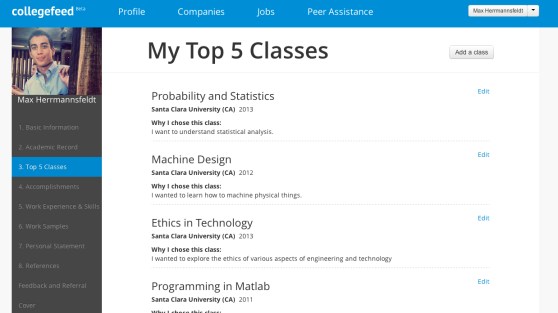 With his profile (mostly) completed, he started to navigate around the site. You have three areas outside of your profile to explore: “companies,” “jobs,” and “peer assistance.”

He first clicked on “jobs” and found that the “jobs for me” section was the most helpful. Here the site recommended positions and companies that were similar to the companies and areas of interest he named when registering. The rest of the “jobs” section he found less effective, namely due to being forced to search for companies or keywords rather than just browse. He said this made it difficult to find jobs he was interested in, but once he did find something interesting, it was just a click of a link to be taken to the application page for the position.

Next he navigated to the “companies” section.

“The companies tab is pretty cool, actually. Search by name and then you can click on one and it will give you an overview of the company. The company page has sections for overview, products, jobs, and competition. Although, they don’t always have as much info as I would like, they still have a ways to go to improve the size of their database,” he said.

The “peer assistance” section was where he spent most of his time. In this section other users posted accounts of interviews with different companies and the questions asked. He mentioned that although he found it potentially very useful, the fact that there were not many companies represented diminished its effectiveness.

Overall, Max thought that the site had some kinks to work out but that he found it very useful. Only a user for a few days, he says he plans on using it in the future to find jobs and that once the small issues and limited content issues get fixed, it will be even more helpful of a tool.

How Collegefeed goes about addressing these small issues and lack of content will determine how the company, whose site had a limited launch in March and a nationwide release ten days ago, succeeds in the future.

Collegefeed’s plans for the future

In a phone interview, Sanjeev Agrawal, Collegefeed’s chief executive, revealed that the number of current users was only in the thousands. He would not reveal a more specific number than that. Following up on this point though, he said that the company is not pursuing a large user base at the moment, instead focusing on developing the social network.

“We don’t want to be social just for the sake of being social,” Agrawal said.

In a landscape with competition such as LinkedIn and ReadyForce, Collegefeed is hoping to attract both new users and companies. The company is currently speaking with investors regarding raising a first round of funding and this capital could be used to attract the users and companies the site needs to truly thrive.