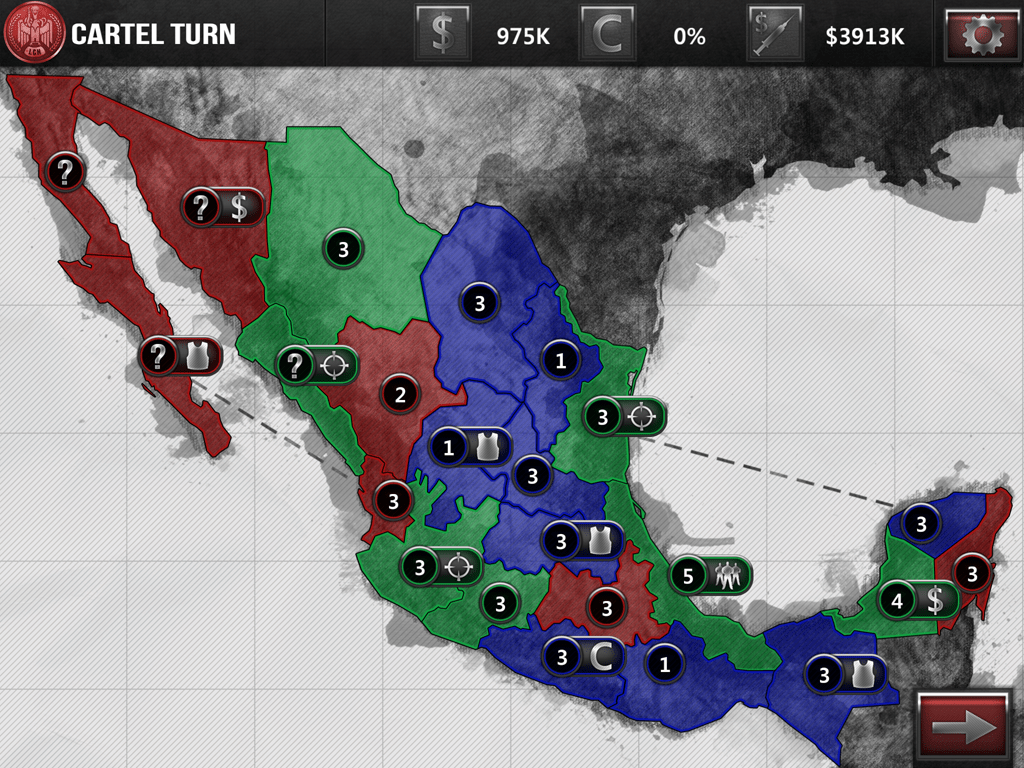 The global War on Drugs is the four-decade-long policy of many Western governments, including the U.S. and Mexico, to stamp out the supply of narcotics. Now, developer Auroch Digital from GameTheNews.net is exploring the conflict with a new title for iOS, Android, PC, and Mac.

NarcoGuerra is a strategy title that puts players in the role of the Mexican government. Using mechanics similar to the board game Risk, you must try to find and destroy drug cartels in a never-ending battle.

“We’ve built a simulation based on our research about the reality of the War on Drugs,” NarcoGuerra lead designer Tomas Rawlings told GamesBeat. “[The game shows] how corruption and street price ebb and flow with police actions.  It’s up to the player from there [to decide] what they get out of the game, but most gamers I come across are smart people. I think they’ll figure out that to win this war to have to understand it’s not a war in any conventional sense at all.”

Rawlings previously produced strategy title Endgame: Syria that used game mechanics to explore that nation’s civil war. Endgame: Syria drew some criticism for using real-life current events in a game, and Apple blocked its release on the iOS App Store. The studio was able to get it back on the App Store after removing the references to real places and governments. Rawlings feels that this is an unfair double standard.

“In reflecting the world around us a singer might write a song, a filmmaker produces a documentary, and a journalist writes an article. As games developers we express our interests via games,” said Rawlings. “Just because our form of expression is through games, this doesn’t mean we take the subject any less seriously. This game aims to engage players in the issue and get them to think about why this war is still going on despite the billions [of dollars] spent on it.”

NarcoGuerra costs 99 cents. It is the first time GameTheNews is charging for one of its titles, and that’s because the group feels it is a premium experience.

“The game is the biggest ‘newsgame’ we’ve created, which has taken a lot of time, effort, and expense,” said Rawlings. “All news organizations have to make income to pay staff — we’re no different in that respect.”

This isn’t the first time video games have looked at the War on Drugs, but Rawlings feels it’s the first time an interactive title is investigating it with any nuance.

“Games have covered this area a lot but never in a deeper sense that just good versus bad,” he said. “For example, Call of Duty: Modern Warfare 2 has the Favela level, but we don’t ask why is this fighting going us — we just point and shoot. We wanted to delve a bit deeper into the why and a strategy game makes a great frame to do this.”

In fact, just in making this game, Rawlings said he learned many things about the Drug War that he wasn’t previously aware of.

“I assumed the solution was going to be in tackling consumption and not production and trafficking,” the designer told us. “But it turns out that consumption per person hasn’t really changed that much.  I also learned how violent and damaging this situation is for so many people. Albert Einstein said insanity is doing the same thing over and over again and expecting different results.”

Rawlings believes that by experiencing the decision making themselves, gamers might get a better understanding that the War on Drugs requires a fresh infusion of ideas.