Developer Irrational Games’ first-person action title BioShock Infinite (available for the Xbox 360, PlayStation 3, and PC) has been out for a couple of months now, but forums and message boards are still full of gamers’ unanswered questions about the surprisingly esoteric game. It doesn’t help much that you find many of the answers in easily missed audio logs scattered throughout the levels, but, hey, that’s what the Internet is for.

Here, more or less, are the answers to your lingering questions.

OK, some of you are currently screaming at your computers, phones, or tablets. Two points: First, you’re right; this is a really easy question and one of the few that players can answer even without finding all the Voxophones. Second, please stop screaming. You’re on a bus, and you’re scaring people.

But I bring up the floating city’s seemingly incongruous soundtrack — which consists of old-timey versions of songs from Cyndi Lauper, Creedence Clearwater Revival, R.E.M., and others — because its genesis ties in with another topic I’ll cover later. 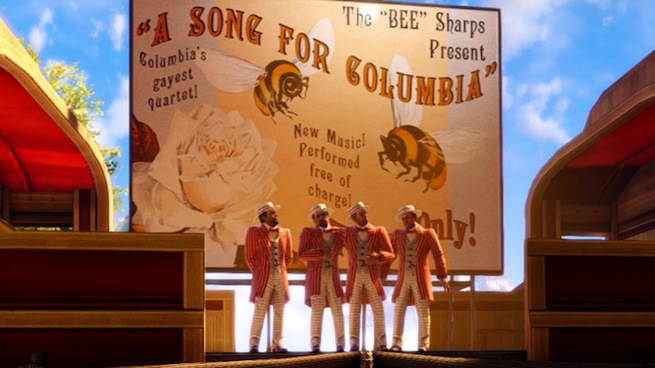 Columbia has a bunch of unstable “tears” that occasionally burst open to allow a glimpse into another time and place, like a world where Episode VI of the Star Wars saga kept its original title of “Revenge of the Jedi.” Sometimes when players find one of these rip-holes, they can hear music on the other side.

Albert Fink, Columbia’s resident composer and brother of pathological industrialist Jeremiah Fink, has also heard the songs coming through the interdimensional portal conveniently located in his studio. Because “profiting from the work of others” is apparently emblazoned on the Fink family crest, Albert took the opportunity to create his masterpieces by adapting the tunes he heard into more 1910-friendly versions. So we get a barbershop quartet singing The Beach Boys’ “God Only Knows” and a rendition of Tears for Fears’ “Everybody Wants to Rule the World” that sounds straight out of Al Jolson‘s catalog.

In case you missed the pertinent Voxophones, here they are:

“Out of the Thin Air”

Which leads logically to:

What the hell is the Songbird?

Irrational has always been reluctant to discuss the giant mechanical bird that acts as Elizabeth’s protector. Before the developer announced Songbird’s official name, it would only refer to it as “Him.” It’s unclear whether that was to keep some mystique or whether Irrational just hadn’t properly named the thing yet. But the Songbird featured prominently in the game’s marketing, and fans couldn’t wait to figure out exactly what it was.

And then we played the game, and it was still murky.

Irrational purposefully obscures the nature of the beast, restricting our knowledge to general facts:

And really, that’s all we need to know. But that isn’t to say that we can’t still glean some information about Songbird from those pesky Voxophones. Take this one, for example:

“A Child Needs a Protector”

Your first time through, Fink’s description of an incredible blueprint he spied through a tear may not strike you as significant, but one scene near the end puts it into a new perspective.

If you can get past the maker of that video’s almost complete refusal to look anywhere that will help me make my point, you might notice something in the background of that death scene. Do you see it? Back there in the tube? 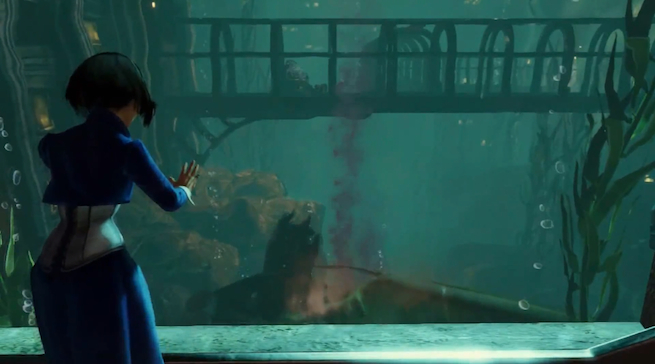 Since this scene takes place in the first BioShock’s underwater city of Rapture, it isn’t suprising to see a Big Daddy. But watch that video again: The Big Daddy is dead, and his Little Sister is mourning him. In the foreground, Songbird is dead, and Elizabeth — the girl he protects — is mourning him. I can also get crazy obsessive and point out how Elizabeth’s blue dress resembles a Little Sister’s and how the color-coded awareness indicators in Songbird’s eyes match the ones in a Big Daddy.

It is not subtle.

But while you’re replaying things I’ve already shown you, go listen to that Voxophone again. Which plans do you think Fink had spied through the tear?

While we’re on this topic, look at Infinite’s vigors — genetic superpowers that resemble the earlier games’ plasmids. Fink stole those from tears, too, but good on him for finding a way to make them drinkable instead of requiring Booker to jab himself with a needle big enough to blind a tarsier.