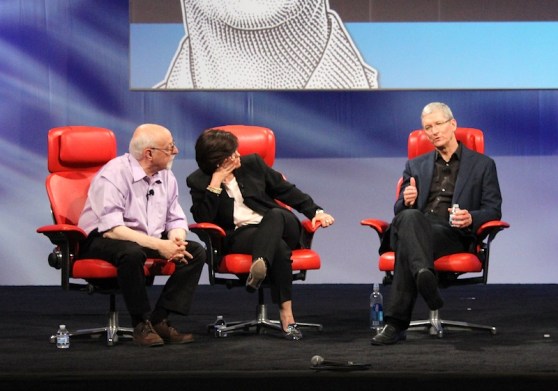 TERRANEA RESORT, Rancho Palos Verdes, Calif. — Android market share has zoomed past Apple’s in the past year, first in smartphones and now — nearly — in tablets.

Apple chief executive Tim Cook is not worried. But then, he wouldn’t say that he was, would he?

Cook, speaking onstage at All Things Digital’s D11 conference today, repeatedly refused to answer specific questions about Apple’s future product direction. He acknowledged that Apple’s stock price has been “frustrating” lately. But he did say he was happy with the current market standing of iOS versus its competitors.

E-commerce. He said iPad users make twice as many purchases from e-commerce websites as all other tablets combined.

Plus, just look at the absolute numbers: Cook said that Apple has sold 85 million iPhones to date and 42 million iPads. Its app store has 350,000 apps that have been optimized for the iPad.

“Customers love them,” Cook said. And for him, at least onstage, that’s enough.