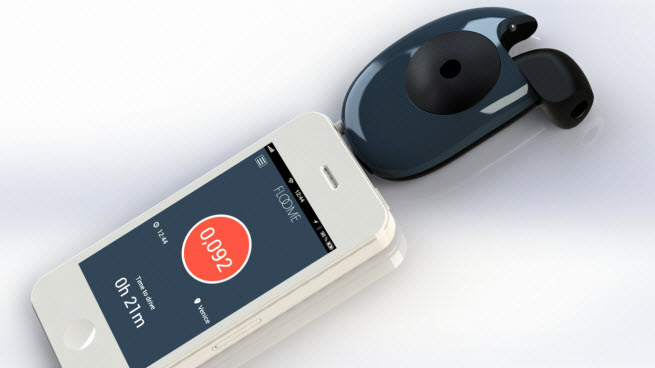 2045Tech is launching its new Floome breathalyzer for smartphones today. The breathalyzer can attach to any smartphone and tell you within seconds whether your blood alcohol level is above legal limits or not.

The Venice, Italy-based company says the Floome, which fits in your palm, is the first smartphone breathalyzer with professional-grade accuracy. In the amusing video below, 2045Tech shows how it works on people who are either drunk or aren’t sure if they’re drunk. It works with Android, iOS, and Windows smartphone devices using a standard headphone jack.

It’s timely in part because the National Transportation Safety Board has just recommended that the current blood alcohol threshold for drunk driving be halved to 0.05 in the U.S. And France has begun requiring a breathalyzer in all cars.

It has a “sleek Italian design,” which we all know is better than sleek American design (joking). To raise funds for the production, the company has launched a crowdsourced Indiegogo campaign that runs through June 8. The goal is to raise $135,000.

“The benefit of portable breathalyzers is obvious, but there has been an unfortunate trend among the devices now on the market,” said Fabio Penzo, chief executive of 2045Tech. “The cheap ones aren’t accurate, and the accurate ones are very expensive and extremely ugly. Our goal with Floome was to combine accuracy, affordability, and great looks.”

In side-by-side tests, 2045Tech says that its Floome compared favorably to professional equipment, with a consistent standard deviation of less than 10 percent. Floome uses fuel cell sensors to measure blood alcohol levels. Its “vortex whistle” measures breath flow rate and calculates volume. Together, the elements can provide an accurate measurement in seconds.

The breathalyzer battery doesn’t require charging and is hygienic because it has a removable, cleanable cap. It calculates “time to recovery” based on your height, weight, and gender. It can set up alarms reminding you to re-test yourself. And it provides information on how to call local taxis. You can even share the results of your tests with your friends.

In the U.S., roughly 100,000 people die every year from accidents related to drunk driving. The device is selling for a discounted price of $65 now and will retail for $80 in the fall. The Floome comes in five colors and has a jeweled case option.

2045Tech was created by friends at the  University of Padua. It was founded in February and has seven employees and contributors. They started the company with less than $35,000 in personal savings. Marco Barbetta and Matteo Petrani are co-founders. Rivals include Alcohoot, which also claims it has an “enforcement grade” breathalyzer, BACtrack Mobile Breathalyzer, and Breathometer.