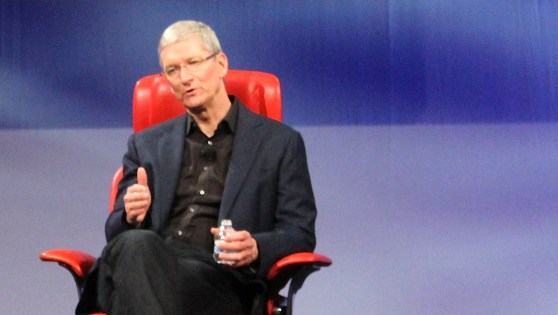 But it’s not just for Apple’s benefit — honest. It’s all about simplicity and fairness, Cook said — and bringing profits home to the U.S.

“I would suggest we gut it. Lower the rate, and then set a reasonable tax to bring offshore profits back to the U.S.”

That’s not just because he wants to pay less taxes. In fact, Cook claimed that if the U.S. adopted his recommendations, Apple might wind up paying slightly more than it currently does.

Its current effective tax rate is 30.5 percent, Cook said, likely one of the highest for major corporations. (Facebook’s was 40 percent, but that was before its IPO happened and employee stock grants made all those taxes disappear retroactively.) What’s more, the company paid $6 billion in taxes last year.

“We pay more taxes than anybody,” Cook said.

“But we’re not in there saying we should pay less. … We may wind up paying a bit more,” if the country adopted Apple’s proposals. “But we would have a limited ability to pull our revenue back offshore, and that would benefit everybody.”

And that’s the issue. Apple generated about $100 billion in revenue overseas last year, which if it had been repatriated would have cost Apple (and benefited the federal government) some $35 billion. No responsible corporate executive is going to sit by while $100 billion of his or her company’s revenue gets sliced by 30 percent or more, so naturally Apple is seeking tax havens, like Ireland, where the climate is more favorable. But that leaves the money locked up overseas, because the company can’t bring it back to the U.S. without incurring a big tax charge.

Cook wants to change that, in order to reinvest the money at home (and presumably pay stockholders).

What about the argument that all of Apple’s products are developed in the U.S. (specifically, “designed in California,” as its boxes all say)?

“The problem with that is … I worry about where development will be,” Cook said. Now, he was clear to point out that Apple wouldn’t make decisions about where to do its development based on the tax code — the company would never do something like that! — but other companies might.

“I worry that … this would not be good for jobs in the U.S.,” Cook said. “I want to make certain that people are thinking through the logical next steps.”