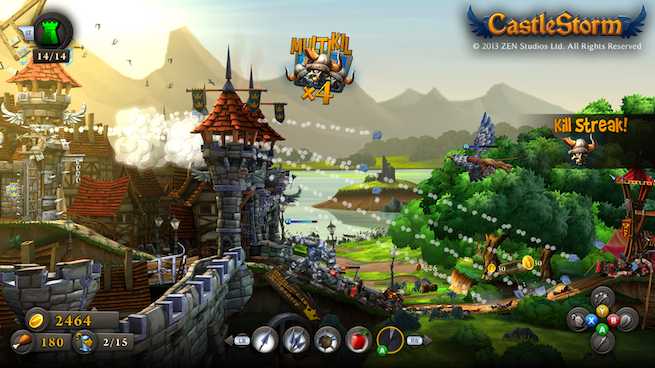 Nobody ever asked Zen Studios to stop making games that star silver balls.

The developer of the successful Zen Pinball and Pinball FX titles, which are available on pretty much every device capable of playing video games, has decided to branch out anyway. Its latest game, CastleStorm, launches today on Xbox Live Arcade. The studio describes it as “a super genre mashup of 2D physics destruction mashed with tower-defense brawler,” but another way of putting it is that it’s like playing Angry Birds and a real-time strategy game simultaneously.

The plot involves a knight’s humorously epic quest to steal back an ancient crystal from an evil Viking plotting to rule the world, but really, the heart of this game is in building a castle and then using its standard-issue giant ballista to fling projectiles — like exploding apples and boulders that split into three boulders — to bring your opponent’s fortifications crashing down. (See? Angry Birds.) At the same time, you have ground units you can send out to try to weaken the enemy’s defenses.

So those are the basics, but the question remains: Should Zen just stick to pinball?

Zen is famous for its physics engine; everything in its pinball tables rolls and bounces exactly the way it would in real life. And this system is a great fit for a game about knocking things down. It’s really satisfying to hurl an exploding projectile into your foe’s precious stronghold and watch the walls fly apart, especially when you set off a chain reaction that causes a huge section of the structure to buckle and crumble into rubble.

And it’s triple-awesome when some of that rubble falls down and crushes some of your opponent’s soldiers; in fact, you unlock an Achievement for killing an enemy this way. But that’s exactly what you’d expect to happen when giant chunks of stone and wood fall from the sky. Other games might make the debris insubstantial once it’s separated from the building, but Zen keeps the realism going all the way to the ground.

The same is true of flying enemies. In what is easily one of the greatest moments of my gaming career, I once used my ballista to shoot a dragon out of the sky. The massive lizard corpse fell to the ground, killing three of my opponent’s soldiers.

Thank you for making that moment possible, Zen Studios.

You typically have two ways to beat a level in CastleStorm. You can either destroy every room in your opponent’s castle or send your ground troops across the battlefield to knock down their gate and capture their flag. One of these is far more satisfying than the other, as I’ve said above.

But CastleStorm also includes an editor that you can use to design your ideal castle. You unlock new rooms by playing through the 12 levels of the campaign; in addition to barracks for your ground units and aeries for your flying beasts, you can also slot in special chambers that do things like make your troops do more damage or grant you bonuses to the gold you collect for taking out your opponent’s forces.

Your ballista will always be in the same place, but other than that, the design is up to you. Building a castle feels a lot like playing with building blocks — Zen’s designers are not afraid to proclaim their love of Lego — and it doesn’t take long to make something worth keeping. Once your masterpiece is complete, you can enter Test Mode to make sure that it will stand on its own and also to blast it into dust. You can pretend that this is to see how difficult it will be for your adversary to destroy the thing, but let’s be honest: Careless destruction is a stark inevitability with all building-block constructs.

Multiplayer is inevitable in a game like this, and Zen has made some interesting decisions with it. You have three modes to choose from, the most obvious of which is a head-to-head fight in which you and your opponent race to destroy each other’s castles or, less interestingly, capture one another’s flags. But CastleStorm also includes two cooperative game types that are actually more fun than their single-player counterparts.

Last Stand is a 2D brawler mode in which you and your partner each control one of the Hero characters. These are superpowerful melee fighters who are typically only available for a limited time in the campaign. You and your partner work together to fight off increasingly difficult waves of enemies to protect your flag in the middle of the arena. You lose if the bad guys carry your banner away or both Heroes are down at the same time (after “dying,” you have a brief cooldown period before respawning).

It’s a lot of fun standing back-to-back with your partner and picking off distant enemies with your ranged attacks before switching to your sword when they get too close, and this game type is way more manageable with a buddy, since single-handedly trying to hold off waves of foes that approach from both sides gets frustrating pretty quickly.

But the most interesting of the three is Survival, in which one member of your two-person team controls the castle’s ballista and sends out troops while the other controls a Hero character on the ground. Co-op Survival is a fun exercise in coordination and communication that gives both parties plenty of interesting and useful things to do.

You can play multiplayer both online and with someone sitting on the other end of your couch. I only played locally for this review, and the individual screens seemed like they would be way too small at first, but the ability to zoom in solved a lot of those issues.

CastleStorm features a soundtrack from composer Christian M. Krogsvold (known on the Internet as Waterflame), whose work you might recognize from 2008’s Castle Crashers. The  music is immediately memorable and fits its “farcical medieval combat” vibe perfectly. In particular, an earlier piece that Krogsvold reworked for  CastleStorm will likely be stuck in your head long after you’ve stopped playing. I’ve been humming it this whole time.

The real-time strategy gets in the way

As I said above, the most fun CastleStorm has to offer is in the physics-driven destruction of buildings. So it’s a drag at times when you have to decide between taking out that wall or killing the little buggers who are trying to make off with your flag. Obviously, you have to deal with the flag issue first, but it’s disheartening when you were all ready to make things explode and you realize that you have to use that bomb to quickly take out the enemy troops.

The RTS bit isn’t completely unwelcome; it gives you something to do while you’re waiting for your ballista projectiles to cool down so you can use them again. But at its worst, the strategy element is something you have to do instead of causing massive damage with your awesome giant crossbow, and I’m not sure why anyone would want to interfere with that.

I leveled this same complaint in my review for Star Wars Pinball, but the endlessly looping voice clips are back. Each class has maybe two things they say when you spawn them (those who can form words, anyway; the Gryphons just make a noise like an eagle). Likewise, you have one sound clip each for every time you destroy a room in the opposing castle and when your opponent takes out one of yours.

To put this into perspective: My most complicated castle had 21 rooms. I played a 10-minute match and lost my entire building, which means that on average, I was hearing that same sample once every 28-and-a-half seconds. But it took the A.I. about three minutes to bust through my protective structural bits, so once I started losing rooms, it was more like once every 20 seconds. And it got old really quickly. You get a bit of a break when you move to a different area and get a new character to say the same things over and over, but it’s only a temporary relief.

CastleStorm is a game that nobody asked for from a studio from which we would have gladly continued to accept nothing but awesome pinball tables. It’s also a funny, entertaining, and deeply satisfying experience well worth the $10 price. Zen Studios has proved that it has more to offer than pinball, and gamers who enjoy building and destroying in equal measure owe it to themselves to check it out.

CastleStorm comes out today on Xbox Live Arcade. The developer provided GamesBeat a free download code for this review.