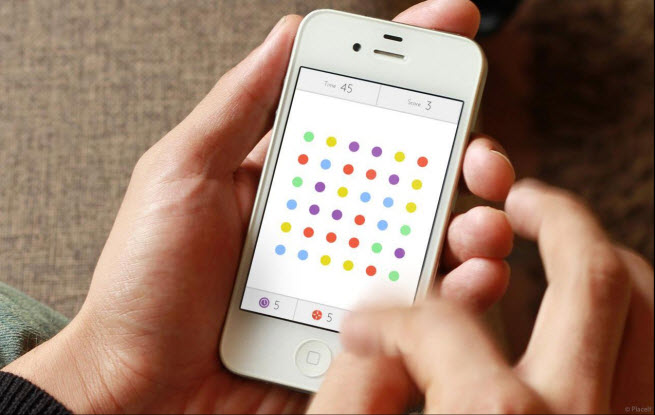 Dots came out just a month ago, but it has turned into an enormously popular game. And tomorrow Betaworks, the startup that created it, is releasing an iPad version of the game with a brand new multiplayer mode.

The game is beyond simple. You move dots around the screen, attempting to connect as many of the same color as you can. If you make a square, all dots of that color will disappear from the screen, and you’ll score more points. But you have to do it all in 60 seconds. The game is still free, and it is now optimized for the iPad’s larger screen. My 13-year-old kid has been obsessed with the game since it came out.

The company says that it has had more than 3 million downloads on iOS and about 250 million play sessions. That’s about 500 years of gameplay. The game is the brainchild of Patrick Moberg and Paul Murphy. They simply wanted to create something that wasn’t similar to anything else out there. It was inspired by both fine art and board games.

The new multiplayer mode is played locally. The creators said that when they released the game, they saw people playing it on the subway, passing their phones back and forth and comparing scores. With the new mode, each player gets the same set of dots. The game also has two additional color modes to accommodate color-blind players.