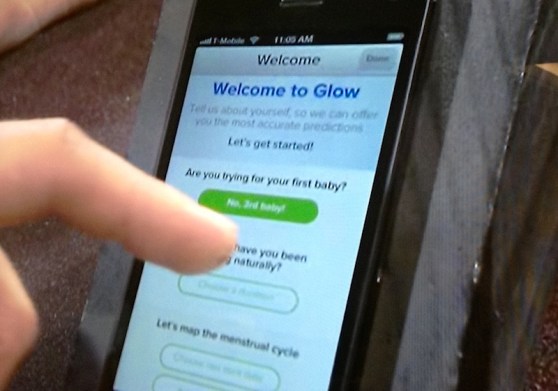 Seventeen to 18 percent of women seek medical help getting pregnant, Levchin said today during a demo at the tech conference D11. But many of those could probably get pregnant if they knew how to read their body signs and could track their ovulation cycles better, he said.

“I believe [fertility] is an information problem. I believe it can be solved by applying data,” said Levchin, who was a cofounder and the chief technical officer of PayPal.

The app, called Glow, is currently pending approval in the Apple App Store. Once available, you’ll be able to sign in and use it to track a variety of vital signs, including your menstrual cycle, morning temperature, when you last had sex, the results of ovulation test or pregnancy tests, weight, stress level, and, yes, your cervical-mucus consistency. (It’s a big predictor of ovulation cycles, which Levchin, to his credit, managed to explain in a very straightforward and technical way — without blushing.)

Men can use the app, too, mostly to provide external observations of their wives’ condition, but in the future it may use data on male body conditions as well.

The app has built-in algorithms to predict your likely fertile times based on the data you enter — but Levchin hopes, by collecting massive amounts of data from thousands of users, to increase its accuracy over time.

To address that, Glow offers an optional “mutual assurance” pool. Couples who choose to do so can contribute $50 per month to the pool for up to 10 months while trying to become pregnant. Those who succeed forfeit their money, and the pool is split among the others who need help paying for fertility treatments.

Levchin, a serial entrepreneur, took on a fertility app for two reasons: One, he started to notice that he had many friends with fertility problems, and he wanted to help. (He has two children of his own already.) But he also was looking for a “big data” problem to solve.

“I set out to solve big problems with the application of big data,” Levchin said. “We’ve procreated very well for a long time without medicine. The thing that’s missing is data and financial coverage. Because this elective procedure issue that gets swept under the rug, I think it needed help.”