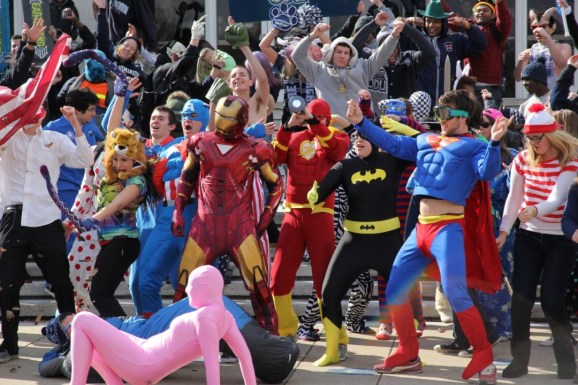 Guest author Neil Joglekar is a co-founder of ReelSurfer, a Y-Combinator funded startup.

Are you using video in your online marketing strategies? Did you know that 87 percent of online marketers now use video content?

Whether you’ve been creating video content for years or this is your first time, we wanted to share some tips on how to make your video stand out from the rest and go viral.

This is the first post in a series focused on helping you supercharge your online video marketing strategy. We want to demystify the meaning of the viral video and give you some concrete tips to help you make your own.

Here are our 3 steps to making a viral video.

1: Understand your audience and their viral triggers

This is very important — it is really, really difficult to make a video that everyone will enjoy. Trying to create universal appeal is not only a waste of money but makes planning nearly impossible.

Focus on YOUR audience, whether it’s new parents, high school students, or college freshmen named Ralph. Get hyper-specific.  At ReelSurfer, we draw an actual face for our target demographic and give it a name. That way, we can better visualize the emotions we want him or her to feel, when he or she interacts with our product and videos.

The average viewer shares video for a variety of reasons.

Peter Furia from Seedwell nails it when he explains that people share for two major reasons: “a) they altruistically want to share the enjoyment of that video with others or b) they selfishly want to be seen sharing or critiquing that video.”

In the first case, people will share your video if they enjoy it and want others to do the same. This is more likely to happen with videos that make viewers happy, like this amazingly cute dog dressed as a wampug from Star Wars:

In the second case, a person either wants to share a video they don’t like or is hoping to be the person who “discovered” a particular video. A classic example of video that fit this case is Rebecca Black’s “Friday,” which despite being a catchy song was mostly shared for other reasons.

The most important aspect of creating a viral video is understanding how to combine the two elements discussed above to understand your audience’s viral triggers. Triggers are what turn your viewer from a passive spectator into someone that will share your content.

Common triggers include videos that are surprising, sexy, or funny, though the rise of sites like Buzzfeed and Upworthy have demonstrated that there is a new trend for illuminating, shocking, and nostalgic videos.

Focus on one or two triggers and go “all-in” on them. If you are going to be nostalgic don’t just make a reference to something from the past, and don’t tug at your audience’s heart strings: rip them out!

2: Optimize your video for an online audience

When your goal is to create a viral video, now is not the time to be restrictive — post your content everywhere. Your video should be hosted on YouTube, Vimeo, and your professional content management system.

Keep your video short — the average viewer watches between 15 – 30 seconds of a video, so lead with the portion of the video that is engaging.

If you have a longer video, use a tool like ReelSurfer to break it down into shareable clips.

Design for remix and meme-ability

Sometimes your initial video is not the one that goes viral, but parodies or memes that are developed from it can become instant hits. One of the best examples of this is the Harlem Shake, where the original video did not become popular, but viewers’ examples of them became a phenomenon.

Make sure to give your video a provocative thumbnail.

For example, this video (which got over 13 million views) used a thumbnail that was not really even related to the video itself. Maybe you don’t need to be this extreme, but your thumbnail should be interesting: a good thumbnail gets your video clicked on YouTube’s popular video list.

Also, make sure to give your video the proper tagging with description text that helps your search engine optimization (SEO) efforts and people who are looking for your video on YouTube.

Unfortunately, nobody can guarantee that a video goes viral, but one thing we definitely know is that a video cannot go viral if no one sees it. After all the hard work that goes into making your video, put it in a position to succeed. The best way to do this is to create initial small groups of supporters to start your distribution cycle.

This goes back to understanding your audience. Online publications and bloggers are hungry for content that is interesting for their audiences.

If you are making a video on how to cook the best lasagna in the world, then reach out to all of the Italian food bloggers you can find and include a link to your video. If you can show them how their audience can benefit from the video, they will be more likely to share it.

After getting some niche recognition, the next step is to reach out to influencers with larger built-in distribution networks. These include YouTube celebrities, mainstream bloggers, Twitter celebrities, etc.

These people are harder to reach and are propositioned constantly by PR firms and others like you. So, it’s even more important to demonstrate why their audiences would benefit from your content. Keep your email pitches concise and explain why their audience would care.

The free version of this is sharing with your friends on Facebook, Twitter, Pinterest, etc., but as social feeds become even busier, this is not a guaranteed way to get your videos shared.

You can also use a service like Virool to guarantee your video gets viewed a certain number of times. They use a network of blogs, games and other partners to make sure that real people watch your content. Again, this does not guarantee that your content will be shared or go viral, but it’s a good start.

If you made it this far, thanks for reading.

As we mentioned above, no one can guarantee that your video will go viral, but we hope these tips will get you on your way to millions of views.

Guest author Neil Joglekar is a co-founder of ReelSurfer, a Y-Combinator funded startup that lets users create viral clips from any video on the web. Neil is a graduate of Stanford University, frequent guest speaker on digital media, and was honored by the World Economic Forum as a Global Shaper. You can find Neil on Twitter @njcar.