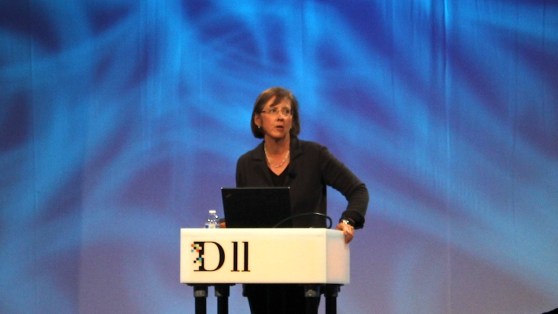 In what might be the most anticipated slideshow of the year, Kleiner Perkins Caulfield & Byers partner Mary Meeker has just published her latest report on the state of the Internet.

In the report, Meeker includes key web trends surrounding world growth patterns, mobile momentum, what is happening in China, the new state of entrepreneurship, and perspective on high-skilled immigration. Meeker says there are now 2.4 billion web users around the world and that total is growing rapidly. Mobile usage continues to explode, but mobile advertising is still sluggish.

Check out the full slideshow below:

A few key moments from Meeker’s presentation today at D11:

On the rivalry between iOS and Android: “We had Lakers vs. the Celtics back in the day. Now we have Apple vs. Google.”

Fitness data: “If you think there’s a big market that needs to be changed … behavior is the biggest driver of premature death. There’s a reason why people want to use this data to improve their health.”

On sharing: “Americans are huge underachievers.” While 24 percent of the world shares “most or everything” they do online, only 14 percent of Americans do.

On terrorism: “I’m on the cusp of believing the world will be safer than ever, but it will not be a straight path.”

Mobile web access: It is surpassing PC access around the world, including in China and South Korea.

On Facebook: Facebook revenue and mobile users continue to grow. The average revenue per user (ARPU) has been declining for desktop users on Facebook, but rising mobile ARPU has offset that decline.

On tablets: In less than three years, tablet shipments surpassed PCs and notebooks in the 4th quarter.

On wearable technology: “The average person reaches for his or her smartphone 150 times a day. What if you didn’t have to?”

New categories of gadgets: “Drivables” (cars and car tech), “Flyables” (drones), and “scannanbles” (QR codes). In China, you can follow the U.K. embassy by scanning a giant QR code on the security wall outside the building. QR code scanning has increased four times year-over-year in China.

On China: Lots of growth in China. For the first time, there are more iOS and Android users in China than in the U.S. (as of the 4th quarter). Many sites are benefiting from the growth.

On global GPD: There’s a really interesting slide showing various regions’ share of global GDP from 1820 to today. China is growing rapidly and currently is at 15 percent (almost matching Europe, which has 16 percent).

On young people: “We actually believe this generation is a little bit different. … We’ve never seen so many people turning their passions into businesses.” One example is Otis Chandler at Goodreads.

On immigration: America has a shortage of high-skilled STEM workers, and we need more to remain competitive. “The global environment for recruiting high-skilled STEM workers is likely to get a lot more competitive.” Sixty percent of top 25 tech companies were founded by immigrants. We’re educating more people (with more student visas) but sending more of them home after they graduate.