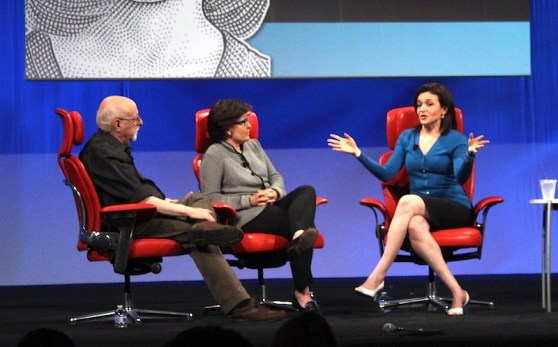 “I wrote Lean In [published by Knopf in March] because, it turns out, men still run this world. And I’m not sure how well that’s going,” said Sandberg, chief operating officer of Facebook, speaking on stage today at the All Things Digital conference.

The problem is that, in business, gender is such a polarizing issue that no one is willing to talk about it — or even use gendered words.

Worse still, the more successful a woman becomes at work, the less others like her. The reverse is true for men: The more successful, the more well-liked they become. Few men have been called “too aggressive” at work, while many women have — a reflection of early gender norms, Sandberg said, where little girls with a take-charge attitude get called “bossy.”

Sandberg suggests an easy intervention: During performance reviews or in other situations when a woman comes under criticism, simply ask: “If a man did exactly those same things, what would you say?”

But gender issues weren’t the only thing Sandberg addressed today.

On her possible political career

Are you running for President? “No.”

On her relationship with Mark Zuckerberg

“It’s like any relationship. We don’t take it for granted.” The two executives sit next to each other at the office and frequently send Facebook messages to each other. They’re in constant communication and give each other frequent feedback.

While Zuckerberg is the CEO, and she reports to him, they’ve divided up responsibilities. Zuck prefers to spend his time focused on product, engineering, and design. Sandberg helps run the company, oversees sales and marketing, and works on business development deals.

People either love the company’s new Android app, or they hate it. “It’s very bimodal. We get 5s and we get 1s — there’s very little in the middle,” Sandberg said.

People who don’t like it don’t like the way it takes over the phone, but, she said, they do like the core features: the news feed and chat heads. Facebook is taking that feedback to heart.

Facebook gets 1 in 7 of the minutes people spend on desktop PCs, and 1 in 5 minutes on mobile devices. So mobile usage is up — and the company is making 30 percent of its revenue from mobile now (up from zero at the time of its IPO.

Because people use Facebook on mobile devices and at home or at work, the company is capable of reaching people — and delivering ads to them — almost any time of day.

“We are both a mass medium and very targeted,” Sandberg said.  “We have a Super Bowl every day in the U.S.,” meaning advertisers can reach 100 million or more people.

But they can also do very targeted ads, reaching, for example, 12 million likely car buyers, or 23 million heavy soda drinkers.

“Now, we can do it all day, because you’re checking Facebook on your phone all day.”

Every team at Facebook is now “mobile first,” Sandberg said.

She tried Google Glass last week. “It took me a minute to figure out how to look at it, but once I did, I really liked it.”

But will the company make its own Facebook-branded wearable device?

“We’re not working on a wearable device, but we are one of the first apps to launch on Google Glass,” Sandberg said. “Never say never, but we are not a device-making company.”

There are 1.1 billion users of Facebook now. As it reaches into every other possible demographic, are teenagers using the network less?

No, Sandberg said — though she acknowledged that they are trying out other social platforms, such as Tumblr and Twitter. However, she said, they remain highly engaged with Facebook, and she cited Pew Research numbers released last week that show teenagers’ usage of Facebook has stayed roughly level over the past couple of years, growing from 93 percent to 94 percent.

When Facebook bought the photo-sharing startup, for a price tag that wound up being more than $700 million, it had 34 million users. It now has 100 million, Sandberg said.

“We have a great working relationship,” she said of Instagram founder Kevin Systrom.

On anonymity and revolutions

On Facebook, pages are allowed to be anonymous: “That’s really important. People start revolutions. We need that.”

But individuals are not anonymous, which helps provide accountability in comments, Sandberg said.

Sandberg closed with a note for anyone who has a young girl in their lives.

“Next time you’re about to call your daughter bossy, say instead ‘My daughter has executive leadership skills.'”