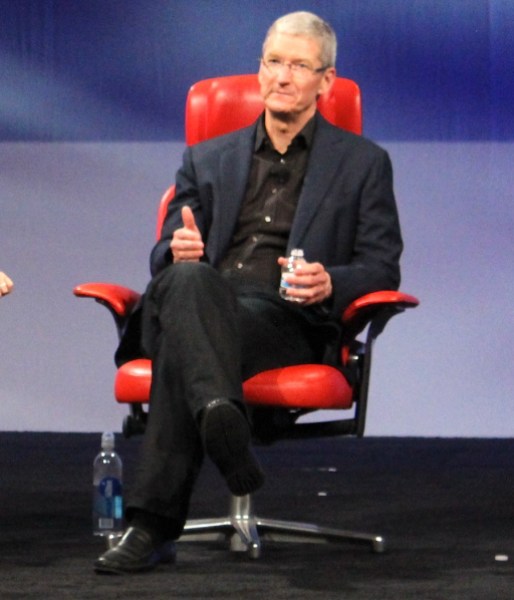 He might be the calm, steady hand that Apple needs right now. But with Apple stock at about $444, down 36 percent from its high of over $700 in September, he’s not the figure that Wall Street wants.

During the hour and a half he was on stage here yesterday, Cook said a lot of words — but very little of what he said made a serious impact. He projected a calm, avuncular presence, chuckling occasionally at the jokes posed by his interviewers, Walt Mossberg of the Wall Street Journal and Kara Swisher of All Things D. But there was very little emotion or passion in his remarks.

Is he worried about Android’s growing market share? Cook cited iOS usage figures and device sales (85 million iPhones and 42 million iPads to date). Does he have plans for a revolutionary new TV product? He cited AppleTV sales figures (13 million to date). Is he concerned about the grilling he got in the U.S. Senate last week over Apple’s overseas tax-avoidance strategies? He stated Apple’s effective income tax rate (30.5 percent) and the number of dollars it paid in taxes last year (6 billion). He admitted that Apple’s stock price was frustrating and then told a story about what price it was at 10 years ago.

Boy, can this guy throw around numbers. Just about the only time he didn’t respond with a string of digits is when he was asked about Google Glass and other wearable technologies. He said he doesn’t think Glass was ready for widespread adoption, because most people don’t actually like wearing glasses — but that wrist-mounted tech might have more promise. He wears a Nike Fuelband and says wearable tech could be a “profound area.”

So many words. So little content. There is almost nothing in Cook’s 90-minute spiel that you couldn’t have gleaned from the company’s quarterly earnings report a few weeks ago, other than the words “frustrating” and “profound” (which the media promptly jumped on — we’re looking for anything new we can get).

Unfortunately, that’s not what the crowd came to hear from the CEO of the world’s largest (by market capitalization) tech company.

Apple itself may need a kindly, nerdy uncle, and in the aftermath of Steve Jobs, who led by force of personality, vision, and a tyrannical drive for perfection, Cook may be exactly what the doctor ordered.

But the markets don’t want that. They want vision.

And if you’re buying an iPhone today, the vision thing isn’t just an abstract concept. It’s a promise that the entire ecosystem — the hardware, the software, and the services — will not only be around for a long time but will continue to be rich and full of possibility. Nobody wants to buy a phone only to find, with a year still left on your contract, that all your friends are using apps that you can’t get because you bet on the wrong device. Vision is an important part of the product specs.

So what should Cook have done? He’s not going to succeed by trying to be Jobs. He needs to be true to himself, but also deliver what the market wants. To do that, he should:

All he has to do now is sell the dream.